Watch Phil Mickelson hit driver out of a bush, because you need to see it to believe it 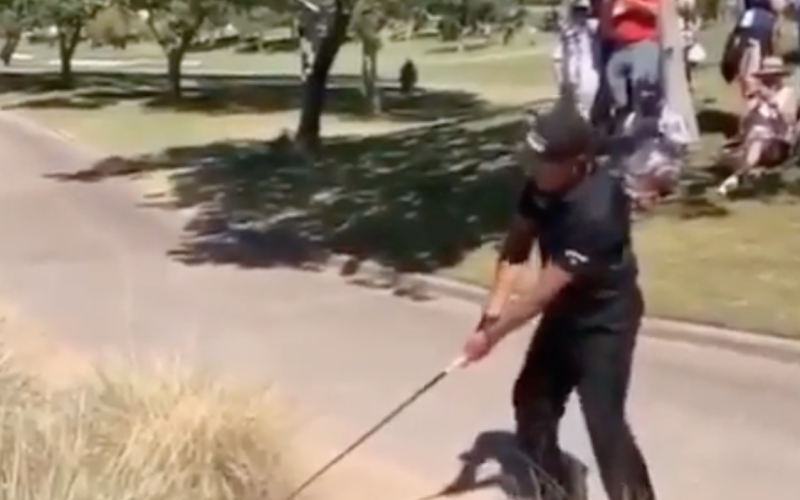 By Alex Myers
How much Phil Mickelson has left in the tank as he approaches his 50th birthday in June remains to be seen, but we can be certain of one thing: This old dog continues to learn new tricks.

On Friday, we marvelled at Mickelson’s amazing recovery shot from a gravel lie while standing on a cart path. It was vintage Mickelson, a mix of showmanship and skill that golf fans have gotten used to during his nearly three decades on the PGA Tour. Even more amazing? Mickelson managed to top that effort less than 24 hours later.

Although there is no official footage of the driver Phil hit out of a bush during Saturday’s third round of the Shriners Hospitals for Children Open, thankfully, a Las Vegas real estate appraiser named Vance Randall was at TPC Summerlin to document this absurd attempt. From his Instagram story you can see Phil thought about a more conservative play with a hybrid (LOL) before settling on the big stick, because, well, he’s Phil Mickelson. Anyway, here is just the shot itself, because you need to see it to believe it.

Again, that’s a driver from a bush in the desert. Not in Old Tom Morris’ wildest dreams could he envisioned such a sight. We’ve seen Phil try the driver off the deck from the rough before, but this? Wow.

Unfortunately, we’re not sure what hole this was on, though from PGA Tour ShotTracker (a 203-yard shot from the native area back to the fairway) it appears it was the par-5 ninth and Mickelson made par. If so, even better.

What we do know is that he shot a disappointing 74 to drop near the bottom of the leader board. We also know from the fan reactions to his latest bold/ridiculous decision that the five-time major winner still gave them their money’s worth.

The Open 2018: Phil Mickelson is working hard on his short game by hitting flop shots over people