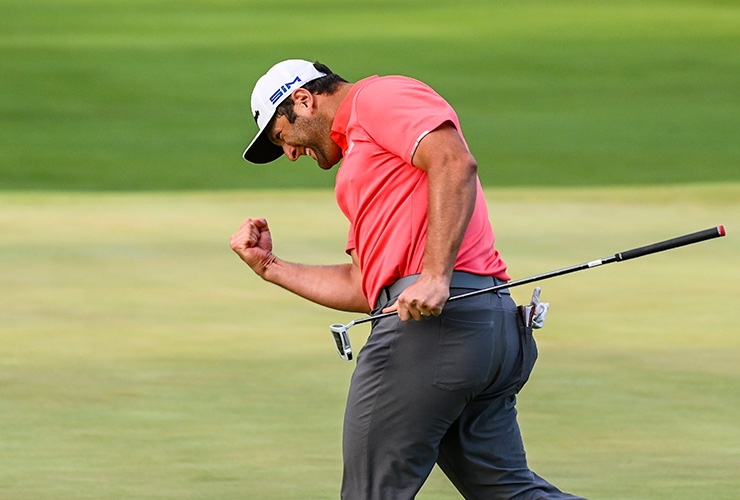 By Ryan Herrington
En route to winning his first PGA Tour title, the 2017 Farmers Insurance Open, Spain’s Jon Rahm made an eagle putt from 60 feet that immediately became the go-to highlight of the 25-year-old’s nascent PGA Tour career. You’ve surely seen the curler from the 18th green at Torrey Pines South disappear into the cup, Rahm bursting with glee in the euphoria of his maiden win.

Golf fans then could be forgiven if they felt like they were experiencing a little déjà vu on Sunday at the BMW Championship, when Rahm made another unbelievable putt from a world away, this time in a playoff with Dustin Johnson, to secure a victory at Olympia Fields.

This one wasn’t for eagle, but rather for a birdie. But it was from an even longer distance—a monstrous 66 feet.

Before seeing this, let’s preface things with a huge qualifier. The fact that Rahm was in the playoff with Johnson at all was something that the Spaniard was likely very upset about. On Saturday, when Rahm shot a four-under 66, he did so despite being assessed a one-stroke penalty after somehow forgetting to mark his ball when he picked it up the fifth green.

“I just hope I don’t lose by one,” Rahm said after his round Saturday. “I’m just going to say that. I just hope. And if I do, well, very well my fault. It’s as simple as that.”

Sure enough, that one stroke was crucial when Johnson made an improbable 33-footer for birdie on the 18th hole to force a playoff with Rahm. It’s a playoff Rahm shouldn’t even have been in if he hadn’t suffered his brain cramp on Saturday.

We all know how much Rahm has “matured” and how his temper is “so much better” than it was in the early days of his pro career. Even so, he had to be pretty chapped at being in the playoff. And then he was stuck with this crazy birdie attempt, on which the NBC announcers made it sound like he’d be lucky to three-putt.

Well he didn’t three-putt. Or two-putt. All he needed was this one try.

Again, remember, Dustin Johnson had just dropped this birdie on Rahm to force the playoff.

A perfect putt at the perfect time.

If he misses, he loses.

Somehow, however, Rahm composed himself to do this. Come on, let’s all take another look:

So let’s consider this now from a different perspective. If Rahm didn’t have that mental slip on Saturday, we would never have been allowed to see the beauty of this demon putt falling in the hole for Rahm’s fifth career PGA Tour title.