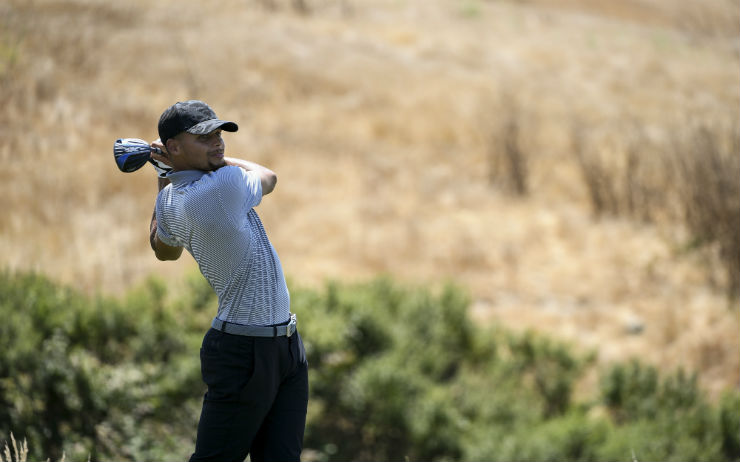 By Alex Myers
Stephen Curry shouldn’t think about quitting his day job just yet, but for one day, he showed he can hang with some of the best golfers in the world.

Shortly after helping to lead the Golden State Warriors to a second NBA title in three seasons, Curry accepted a sponsor’s invitation to play in this week’s Web.com Tour’s Ellie Mae Classic. The decision sparked a big debate over whether Curry should take a spot in an actual tournament, but the two-time NBA MVP proved a lot of doubters wrong with an impressive opening round of 74 on Thursday.

And if you bet on Curry sticking around for the weekend, you’re crazy, but at least you’re not totally out of it. When Curry concluded his round, he was tied for 140th in the field of 156. Not too shabby considering he’s competing against guys who do this for a living.

After a sluggish start of three bogeys in his first five holes — including a yanked opening tee shot that ended up in the cup holder of a golf cart — Curry got going with his first birdie on TPC Stonebrae’s 16th (his sixth hole of the day):

Then a par save on No. 18 (his ninth hole of the day) that produced a first big fist pump:

“He’s putting on a show!” ⛳️ ?@StephenCurry saves an unlikely par at the 18th @EllieMaeClassic.

He made the turn and birdied the Par-5 third thanks to a beautiful pitch to gimme range:

Curry made his lone double bogey of the day two holes later, but birdied the ensuing par 3 (bounceback stats!). He also showed some of that swagger he brings to the basketball court:

.@StephenCurry30 makes 20-foot, curling birdie putt on No. 6, then playfully pulls @JordanSpieth move and asks caddie to get ball from hole

Curry closed with a disappointing bogey on the par-5 ninth, but again, he’s a freaking basketball player and he shot 74 in a Web.com Tour event! He even beat one of his playing partners, Sam Ryder, who won two weeks ago on the Web.com Tour, by a stroke.

“If you told me I was going to shoot 74 in my first round, I would take that all day any day,” Curry said.

Not surprisingly, Curry had a huge gallery following him the entire round:

This is the crowd following @StephenCurry30, on Thursday morning at https://t.co/gZ56s2K2Mk event. No way this is bad for golf pic.twitter.com/GtHDNdCgeh

And he had golf fans all around the world captivated — including several PGA Tour pros:

1st golf scoring I checked out today from all tournaments was @StephenCurry30 @WebDotComTour.

@StephenCurry30 turning in +2 is one of the purest things I've ever seen!

.@StephenCurry30 making 3 birdies and shooting +4 is super impressive. Great golfer but things can be tougher inside the ropes. Well done

Playing partner Stephen Jaeger said he was impressed with Curry’s game, especially his touch around the greens. He was also happy to get a chance to play in front of so many fans.

“Sam and I are going to be on the PGA Tour next year, so for us, it’s a great experience,” Jaeger said.

Curry has a 2:15 ET tee time for Friday afternoon.

“I want to play better tomorrow,” Curry said. “And now that I’ve gotten the jitters out, hopefully, that will happen.”