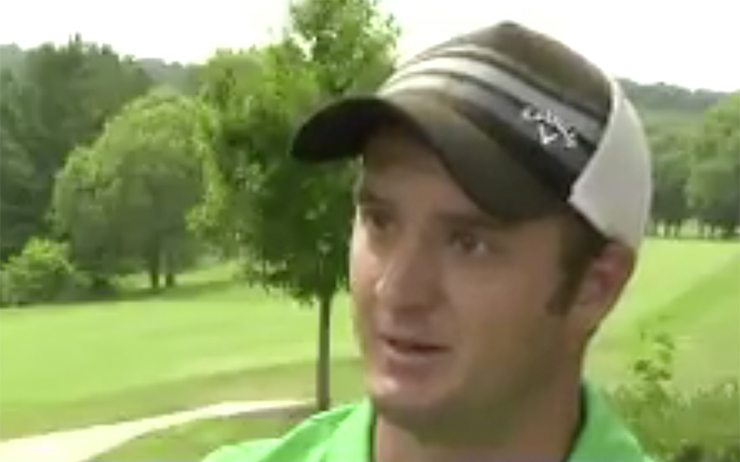 From Sergio Garcia’s major breakthrough to Lexi Thompson’s surreal penaltyto Jordan Spieth’s “Did you see THAT?!” hole-out, professional golf has not been short on spectacle this year. But perhaps one of the most memorable scenes of the season happened away from the spotlight at Monday’s John Deere Classic qualifier.

Kurt Slattery, a former Western Illinois golfer and current assistant pro, earned an invite to this week’s tournament at TPC Deere Run thanks to a 67, a score that earned the 27-year-old a spot in the playoff, one he ultimately won.

But it’s not that he triumphed in sudden death; it’s how. After making three at Pinnacle Country Club’s par-5 18th to earn a spot in the playoff, Slattery went where eagles dare again, this time with a hole-out from 40 yards away:

Better yet, Slattery — who had seven unsuccessful qualifier attempts before Monday — delivered a touching, emotional interview following his moment of glory.

“This is the best day of my life,” Slattery later told the Quad-City Times. “I am so excited for what lies ahead. And you know what, I’ll go into John Deere with the utmost confidence that I can play with anybody in the world. And if I bring my ‘A’-game, I’ll be ready to contend.”

How he fares this weekend is inconsequential. For while Slattery’s story is still unfinished, its legendary status has been secured.