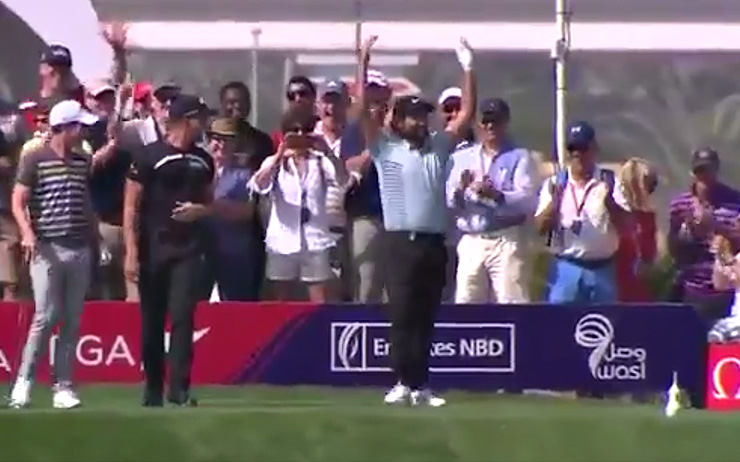 By Kent Gray
Is the scoring at the 29th Omega Dubai Desert Classic actually real?

Not long after Pat Perez had waltzed around the Majlis’ back nine in a scarcely believable 29 strokes to haul himself back into the €3 million European Tour event, Frenchman Alexander Levy went and did this:

It was the second ace in as many days on the Majlis after Englishman Matthew Southgate binned his tee shot on the par-3 7th.

Did we also mention Rory McIlroy’s five birdies in seven holes to set the halfway lead at -15?

Perez started the third round at -6 but got it to -14 with eagles on the 13th and 18th in a outward nine also sprinkled with four further birdies. It was breathless stuff that had the Desert Classic on 59 watch for the second time in three days after Jamie Donaldson’s opening gambit which eventually ended with a 62.

Pat Perez is on fire out there ??? pic.twitter.com/kuQcGEOLyS

A bogey at the first, Perez’s 10th, and a par at the short par-4 second slowed the PGA Tour drawcard’s momentum but Ernie Els’ 1994 Majlis course record 61, -11 under,  is still under threat.

Indeed, strap yourselves in sports fans. Moving day is off to a cracking start, especially with Rory only easing into his third round. The way things have started Saturday, anything could happen.