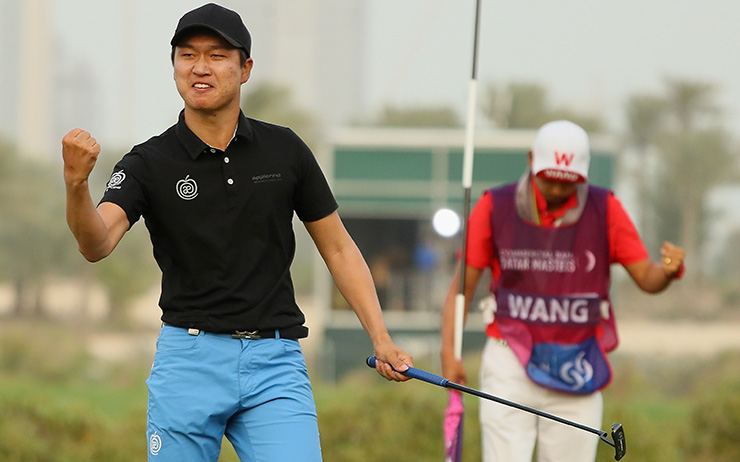 Jeunghun Wang is no longer Jeunghun Who?

At 21 years and 144 days old, Wang became the third youngest player in European Tour history to win three events. The two gentlemen above him on the list? Italian whiz kid Matteo Manassero and a bloke so legendary he needed only one name, Seve.

Wang won the Sir Henry Cotton Rookie-of-the-Year award last season after his back-to-back victories at the Trophée Hassan II – also after a play-off – and the AfrAsia Bank Mauritius Open. As lesser events on the European Tour sandwiched between the U.S. Masters and U.S. Open, Wang’s rise went largely unnoticed in the big scheme of golfing things. But that’s all changed now as he could leapfrog as high as 39th in the OWGR, propelling him into the year’s four majors and World Golf Championship events.

“This feels really fantastic for me,” he said. “It’s really, really great. I’m so happy,” Wang said after getting up and down for a birdie four in overtime to pip Lagergren and Van Zyl.

That will be this week’s Omega Dubai Desert Classic where Tiger Woods, who doesn’t have a bad record as a youngster, is the headline act. After finishing 11th in Abu Dhabi the previous week, Wang deserves will enter Dubai will more confidence than Woods, who missed the cut at Torrey Pines in his 2017 bow, if not the same pedigree.

Every shot of the #QatarMasters playoff in under three minutes. pic.twitter.com/TUjA2xTD8z

Wang began the final day at Doha Golf Club with a three-shot lead but was caught on the back nine before retaking top spot on his own with a birdie on the 16th.

A bogey on the next dropped him into the play-off at 16 under and he then left a birdie putt agonisingly short at the 72nd hole to be forced into overtime.

He didn’t need a second invitation on the first visit back up the 18th, getting up and down from the back of the green for a winning birdie after an aggressive approach.

It was heartbreak for Van Zyl, who looked the favourite when he got on the green in two on the play-off hole only to three-putt for the second time on the final day. It was the South African’s fifth bridesmaid finish in his 150th European Tour event.

Lagergren is also searching for his first win after leaving himself too much to do when after tugging his second shot in the play-off into the greenside bunker.

“I was really nervous on the back nine,” Wang said. “I missed a lot of greens but my chipping was really good today so I saved everything and finally I won.

WITH THIS WIN – JEUNGHUN WANG