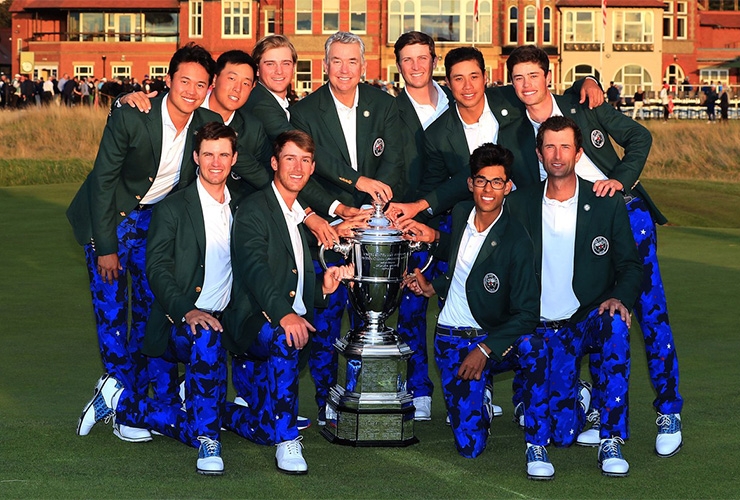 By John Huggan
In this modern era of home-team domination in golf’s oldest biennial inter-continental competition, not since 2003 at Ganton has a team overcome a first-day deficit to win the Walker Cup. But forget that little record of futility, one endured by the U.S. since 1963 at Turnberry, and step forward to the 2019 American squad captained by 1981 U.S. Amateur champion Nathaniel Crosby.

The final, and ultimately convincing, score of 15½-10½ also made the Americans the first Walker Cup side to win away from home since 2007. That U.S. team, containing the likes of Webb Simpson, Dustin Johnson, Billy Horschel, Jamie Lovemark, Rickie Fowler and Kyle Stanley, triumphed by a single point at Royal County Down in Northern Ireland.

It remains to be seen if those on the current American squad will go on to anything like individual successes of their already prolific predecessors. What is known, however, is that this was truly a team effort, a proper collaborative endeavour. Points came from nine of the team’s 10 members (Steven Fisk the unfortunate exception), although just one, John Pak (matching earrings and all) emerged unbeaten, walking off with a 3-0-0 record.

Every other golfer on the winning side lost at least once, a “feat” repeated by all 10 players on the GB&I team. Scotsman Sandy Scott (2-1-1) was the best of the Old World bunch, at least statistically, with British Amateur champion James Sugrue the only home player to leave pointless. 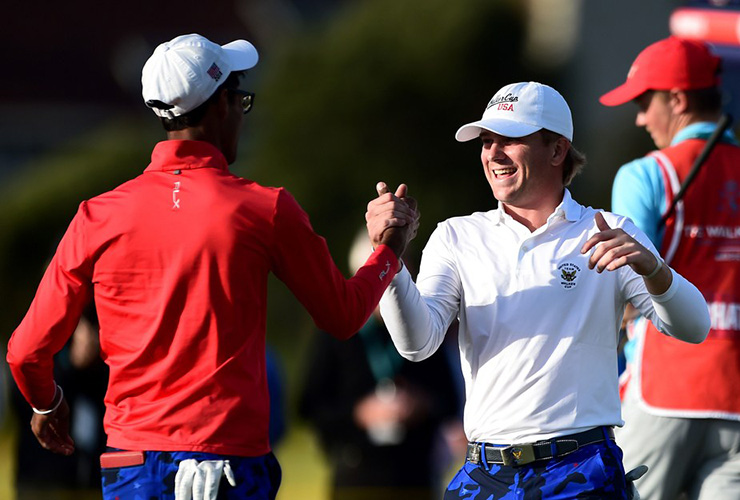 It was clear from the start of the fourth and final session that the Americans were imbued with an uncommon level of determination. Where the golf during Sunday morning foursomes (won 2½-1½ by the Americans) had been less than stellar on both sides, post-lunch the visiting squad was quick to make its collective mark. Six of the 10 won their opening hole. Only the previously unbeaten Brandon Wu lost the 424-yard par 4 (to a birdie), en route to a 4-and-3 loss at the hands of Scott.

“I played very well today,” said Scott, a Texas Tech student by way of Scotland. “I started well and made a few birdies and just had a rough patch in the middle but managed to hold on for the win. On the three holes in a row [9-10-11] that I lost, it was just poor decision making. But I knew I wasn’t playing bad golf, so I just had to get back on track and concentrate a little harder.”

But Scott’s play was the exception for GB&I, the scoreboard an almost exclusive sea of red until eight of the 10 contests concluded in favour of the U.S. Amidst that avalanche, the winning point arrived when U.S. Amateur runner-up John Augenstein shook hands with Thomas Plumb on the 15th green, the American a 4-and-3 winner of Match 7. But it had long been simply a matter of time before the arithmetically unassailable number of 13½ was reached.

All in all, the final score represented something of an anti-climax, especially so in the wake of three sessions that, although lacking in the area of solid course management on both sides, never ceased to be intriguing. Few things in golf are more exciting to watch than a closely fought team competition, even if the play falls short of the level one might expect from some of the best amateurs on the planet. Disappointingly, way more holes were lost rather than won.

Anyway, at close of play, the moods of the respective captains accurately reflected how their respective afternoons developed. Where Crosby’s smiling demeanour captured his mixture of delight and relief, GB&I captain Craig Watson’s habitual deadpan expression was the outward manifestation of an inward despondency. Yes, the home team had pushed its opponents hard for a day-and-a-half. But in the end, as so often over the years, the American’s greater strength-in-depth clinched the victory.

“I am very excited,” Crosby said. “We were a crazy mix of personalities, but all blended well. It was almost too much fun, but after yesterday we sobered up and really focused today, and it was an amazing afternoon. I let them just go play. They are very talented guys who believe in themselves. Their talent came to the surface. I could not be more excited for them and me. I’ve not won anything in about 38 years.” 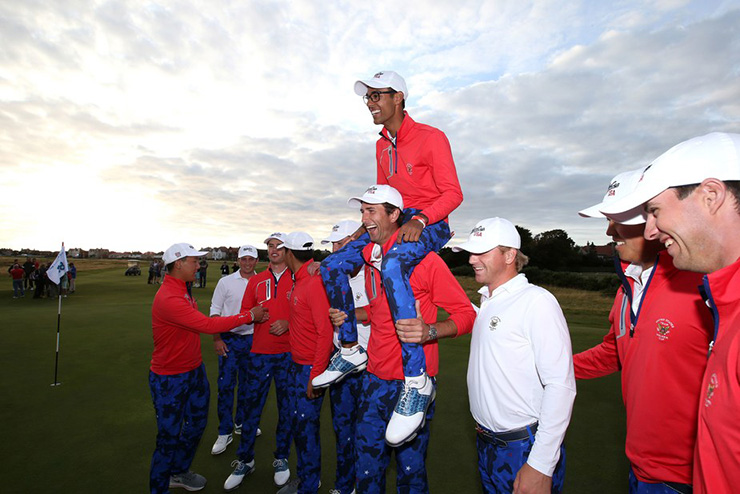 Watson, British Amateur champ in 1997, can beat that period of futility by a decade-and-a-half or so, but that now far-off victory over future Masters champion Trevor Immelman at Royal St. Georges was little consolation for the 53-year-old Scot.

“It’s been a fantastic week,” Watson said, displaying a rare burst of enthusiasm. “The lads will probably learn a lot from this disappointment today. It was a tough course the way it was set up. If you were ahead, early pars were enough to stay ahead because birdies were going to be few and far between, and the American boys did that very well. I don’t think playing in more wind would have made too much of a difference. I don’t think the conditions had anything to do with the fact that the Americans outplayed us today.”

No, in the end, for the winning side this was a result built on greater ball-control, both off the tee and around the greens. A combination that ultimately led to their own little bit of history-making.