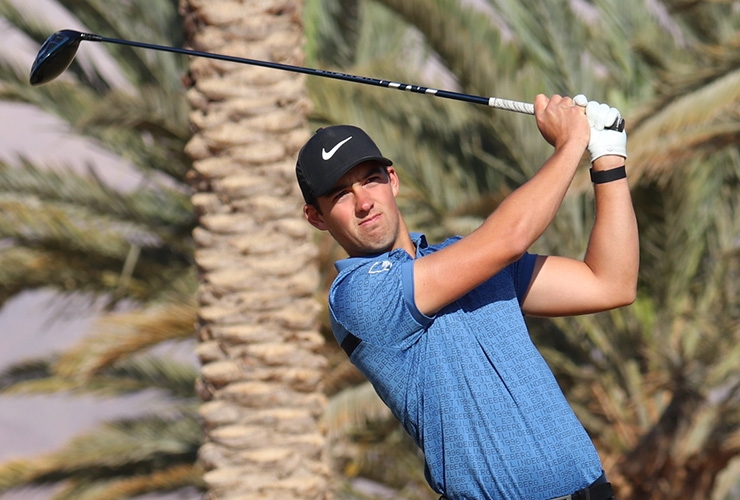 By Kent Gray
With countrymen David Langley, David Hague and Bailey Gill all winning MENA Tour by Arena titles within weeks of turning professional, the danger for Journey to Jordan #2 Championship pacesetter Mitch Waite is pushing too hard to emulate them.

But the second-year pro, who carded a four-under 68 at Ayla Golf Club on Tuesday for a one-shot lead after the opening round of the $75,000 event, knows his time will come as long as he’s patient. The 24-year-old Englishman, who joined the paid ranks in late 2018 after a decorated amateur career, is certainly trending towards victory. He played three Challenge Tour events in South Africa on invites before returning to the MENA Tour and made the cut in all three, highlighted by a T-7 in Cape Town that has him 13th overall on Europe’s second-tier tour.

“It would be nice to get playing status on Challenge Tour. Obviously, I want to win [as well] and getting it on the MENA Tour would be great, but these are things you cannot rush,” said Waite who will take a one-shot buffer into Tuesday’s second round over playing partner Benjamin David and Curtis Knipes (both England) and Scotland’s Ryan Lumsden.

“I look at Hague, Langley and Bailey [Gill] and they have all gone and won events in their first few weeks as a pro and here I am, have been a pro for more than a year and still haven’t got my first win.

“I can get down upon myself, or I can keep doing the right things and stay patient knowing that my week will come.”

The Bristol lad has taken a different tact this week after finished tied 37th in the Journey to Jordan #2 last year before securing his MENA Tour card by finishing 10th in Qualifying School B in January. It helped being spurred on by playing partners David and Tom Sloman who shot a two-under-par 70 to be tied fifth alongside Sweden’s Ake Nilsson. Pavan Sagoo, Jamie Rutherford, Luke Joy and Filip Lundell, winner of Q-School B at the same venue, were tied seventh at one-under-par 71.

“I have not played too well around here, so I had a slightly different mindset this week to go and shoot the best that I possibly can and I am lucky I played with good guys – David and Sloman – and they played well as well,” said Waite.

“I had a decent start today, went a bit quiet in the middle and kept playing well on the back nine. I hit two good shots into the 18th but ended up with a bogey. It’s just one of those things, and I have got to take the positives from this. I was five-under-par through 17 and shot a 68 which was a good round.”

The Felton Golf Club member has started working with Liam James in Belfry as his coach and his friend Will Donald as a mental coach.

“I have come out this year with a better mental frame and probably better technically. I did not have any status and just played on invites in 2019. But it was a slow year and I did not get going. I have worked on all departments of the game and very much looking forward to what 2020 has in store.”

In the race between David Langley and David Hague to secure the Trophee Hassan II start on the European Tour as the leader of the Journey to Jordan Order of Merit at the halfway stage of the 2020 MENA Tour season, Hague was slightly ahead of his rival, even though both players had a start to forget. Hague opened with a 75 and Langley shot 77.

India’s Arjun Gupta was the best-placed amateur in the field, tied 20th after a round of two-over 74.