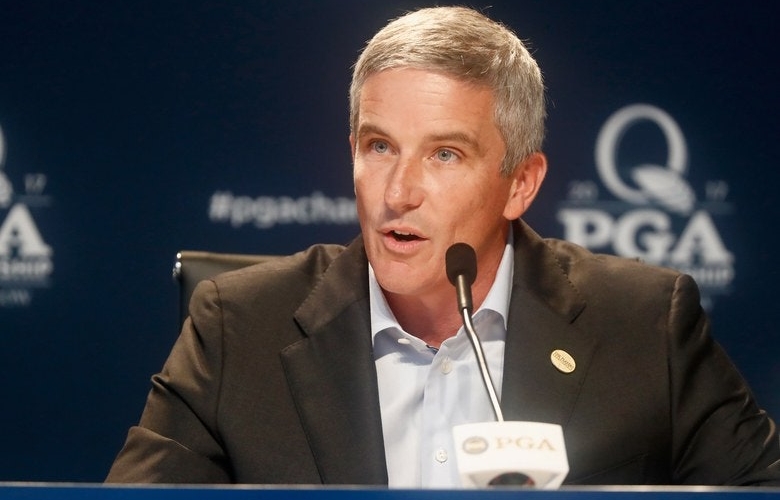 By Brian Wacker
PONTE VEDRA BEACH — As the threat of COVID-19 continues to cause cancellations of everything from large music festivals around the country and a major tennis tournament in California, the closing of locker-room access in numerous sports, and the postponement of games, the PGA Tour is marching on.

The WGC-Dell Technologies Match Play scheduled for March 25-29 at Austin Country Club in Texas—the same city where the SXSW music festival was cancelled—will go on as scheduled, according to PGA Tour commissioner Jay Monahan.

“We feel like we have support to continue to move forward with the event, full support,” Monahan said on Tuesday from the Players Championship. “But … this thing is so dynamic that you just have to go hour-to-hour, day-to-day, but right now we have every assurance that we’ll be in Austin for the event.”

While the tour has said that it has established protocols to promote health and safety for fans and others on-site at its events—including this week’s Players Championship—and that some players may decline to sign autographs as a matter of caution, it has also created a task force to monitor the virus. The tour is also leaning on the World Health Organization and the Centers for Disease Control, as well as those on the ground in the cities where it plays its tournaments.

Meanwhile, the PGA Championship, scheduled for TPC Harding Park in San Francisco May 14-17, remains on track. Reports earlier this week said organisers were looking at a potential contingency plan that included the possibility of moving the event to TPC Sawgrass. But that doesn’t appear to be the case.

“Reports that the 2020 PGA Championship will be relocated from TPC Harding Park are inaccurate,” said a statement from the PGA of America released on Tuesday. “At this time, no such discussions have taken place. We continue to carefully monitor this rapidly evolving situation, in close coordination and communication with representatives from San Francisco. We will follow the guidance of state and city officials and public health authorities, keeping the safety and well-being of all involved as our highest priority.”

Monahan also reiterated that no plans were currently in the works to move the PGA Championship to TPC Sawgrass, though he said the two organizations have spoken and continue to remain in contact with one another. It’s a fluid situation.

“They are fully planning on proceeding with the PGA Championship at TPC Harding Park in San Francisco,” Monahan said. “But when you get in these extraordinary circumstances, you have to make yourself available to your partners, and you have to really work as closely together as you ever have to help each other get through this.

“There is no plan at this point in time for the PGA Championship to be held here. It’s going to be held at TPC Harding Park. But I would just pledge to you, as we’ve pledged to everybody else, that in all of our tournaments week to week that we’ve got to listen and respond to the real information that we’re receiving on the ground. And it’s important for us to present a complete schedule, FedEx Cup schedule this year. And if we can do that, that’s what we’re going to do as good partners to the game.”

Among the large-scale events in America that have been cancelled due to the coronavirus are music festivals SXSW, Coachella in Southern California and Ultra in Miami. Meantime, the WTA cancelled the BNP Paribas Open in Indian Wells, Calif.—an event that has long been considered one of the most prestigious in pro tennis.

From a player’s perspective, Spain’s Jon Rahm said he is trying to adhere to all of the usual preventative measures but is also concerned about how the virus might affect more vulnerable people.

“I know it affects the elderly a little more,” Rahm said, “and I have an 85-year-old grandma with asthma, and I know it’s a respiratory virus. I know she’s a target, and she is close to me and dear to me. My brother has asthma; [wife] Kelly has asthma; Kelly’s mom has asthma. … There’s so many cases close to me that it could affect, so it is obviously my duty and everyone’s to do as much as we can to prevent that, even as hard as it is.

“So this week—I love to fist pump and high five the kids, but it might be the one week where we don’t do it. I love also to sign autographs. I might restrain from that a little bit, too. Not from being selfish reasons, I just feel like it might be the best thing for everybody.”