Video surfaces of Sergio Garcia tossing club at his caddie during the Open, Golf Twitter takes him to task 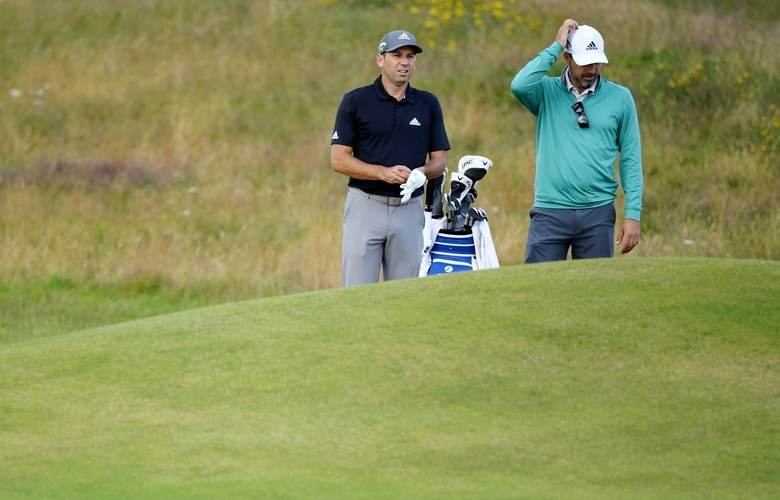 Warren Little/R&A
Sergio Garcia and his caddie and brother Victor Garcia during a practice round prior to the 148th Open Championship.

By Alex Myers
Sergio Garcia’s record shows he hasn’t won anywhere on the golf course in 2019 but the Spaniard has lost even more this year in the court of public opinion.

On Tuesday, a seemingly unbecoming video of Garcia taken by a fan at the Open Championship went viral. In the 20-second clip, Garcia hits his tee shot on the fifth hole at Royal Portrush during the final round. Clearly disgusted with the result, Garcia tosses it over his shoulder at his caddie while not looking as they walk off the tee box, drawing an audible gasp from those in the crowd. Watch and listen:

Garcia went on to double bogey the hole. He shot a final-round 78 to tumble down the leader board and finish in a tie for 67th place.

Adding another layer to this incident is who Garcia’s caddie was for the event: Victor Garcia. As in Sergio’s brother.

It should be noted that the video is difficult to see and we don’t know the full context. Perhaps, that’s how the Garcias show affection for each other.

RELATED: You have to see Sergio Garcia’s bunker tantrum to believe it

Not surprisingly, though, Golf Twitter took Garcia to task for his actions. Here’s a (small) sampling from fans and golf writers:

Caddie should have snapped the driver, dropped the bag, and walked off the course. @TheSergioGarcia is a cry baby and is a terrible role model for kids watching golf. It’s a bad shot dude gtfoh!

POS move by Sergio and he has made many moves like this.

Should and hopefully will be fined for this, terrible by @TheSergioGarcia

It’s impossible to justify treating someone this way. https://t.co/9Axyd6qcIq

This is the second time Garcia has been criticized harshly for a video taken by a fan during a tournament. In February at the European Tour’s Saudi International, a clip of the 2017 Masters champ surfaced in which he angrily slammed his club in a bunker several times. Garcia was disqualified from the event for “serious misconduct” after being accused of purposely damaging greens.

“I feel terrible about it,” Garcia told the AP at his next tournament. “I’ve been thinking about it for the last week, every day. I’m an emotional player. That emotion is probably my biggest strength, but it’s also one of my biggest flaws. If I channel it the right way, it’s amazing. I think that’s why people follow me the way they do. If I channel it the wrong way, it’s too extreme. My goal is make sure the bad gets better and the good stays.”

Judging from this weekend, it appears Sergio still has some work to do.