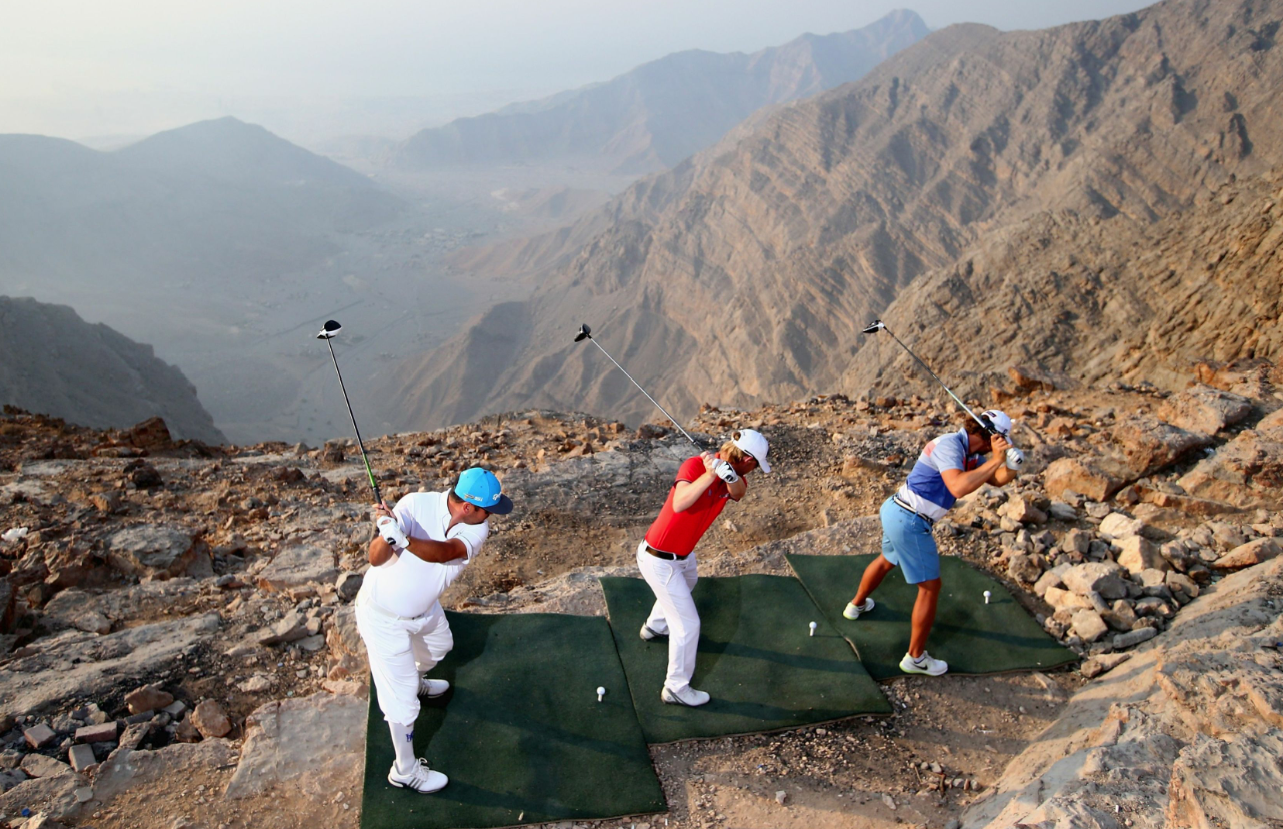 A trio of contenders in this week’s inaugural Ras Al Khaimah 2016 Golf Challenge experienced ‘High Tee’ with a difference yesterday, as they scaled the towering Jebel Jais, the UAE’s highest mountain, before firing a series of blistering drives into the rocky caverns of the lunar-like landscape of the Al Hajar mountains.

“That was probably the only time I’ve ever stood on a tee box and been completely content knowing my drive is destined for the rocks,” laughed Van der Vaart, 31. “Seriously though, it is very beautiful up here. The mountain environment is stunning and it’s completely at odds with the typical beach or desert landscapes the UAE is known for.”

Sjöholm, 31, was equally impressed: “I didn’t even know there were mountains in the UAE, especially mountains as vast as these,” said the Swede. “You can’t quite see Oman from here but it’s fascinating to know this stretch of mountains link the final two tournaments of the season; standing up here today has really brought it home that we’re chasing end of season honours now.”

Piaget, 29, who hails from a family world famous as luxury watch manufacturers, was happy with the extra distance he generated off the elevated tee box.

“I normally hit it over 300 yards off the tee but these drives were going 400 yards easy; well, I think they were, they travelled and fell so far there was no way to tell where they ended up,” said Piaget. “You have to be so controlled in tournaments, so it was nice to have a ‘grip it and rip it’ day up here.”

The promotional stunt took place ahead of today’s opening round of the Ras Al Khaimah 2016 Golf Challenge, which stages its final round on Saturday October 29. Local talents Rayhan Thomas, Jake Shepherd, Cennydd Mills and Michael Harradine will be facing up against the Challenge Tour’s finest in what is sure to be a memorable and historic event for Ras Al Khaimah and Al Hamra Golf Club.