Jonathan Kolbe
Martin Kaymer reacts to making his putt on the 18th green during the final round to win the 2014 U.S. Open at Pinehurst Resort.

By Mike Stachura
Thanks to “the generosity” of the state of North Carolina, the USGA is moving several of its operations, including its vital equipment test centre, to Pinehurst, N.C.

The move, which has been brokered behind closed doors at local council meetings and state legislative offices, will bring four more U.S. Opens and multiple other USGA championships to Pinehurst Resort and the nearby region. Making it all possible are economic incentives from local and state authorities that reach upwards of $42 million and essentially fund the construction of an $18 million test centre that will replace the USGA’s current facility in New Jersey by the end of 2023.

The announcement came Wednesday at Pinehurst Resort after North Carolina Gov. Roy Cooper signed into law the Championship NC Act, which details the economic incentives to bring “a sports organization employer” to the region. Per the law’s requirements, the USGA is promising 50 jobs as part of the move, approximately 15 percent of its workforce, according to the association. That includes administrative positions, as well as a satellite branch of the organization’s museum. The main museum and library, Arnold Palmer Center for Golf History, as well as the USGA’s main administrative offices, will remain in Liberty Corner, N.J.

“This is truly a great day in the 125-year history of the USGA,” said Mike Davis, USGA chief executive officer. He detailed the arrangement that brings U.S. Opens to Pinehurst in 2029, 2035, 2041, 2047 in addition to the already scheduled 2024 U.S. Open, establishing Pinehurst No. 2 as the first “anchor site” for the U.S. Open. “How appropriate for the USGA to be here. There is no better place for the USGA to plant new roots than the home of American golf.”

The broader arrangement is about a broader initiative, said Craig Annis, USGA chief brand officer, noting that the new site will be known as Golf House Pinehurst.

“This allows us to secure a championship host site at Pinehurst that has proven time and again a wonderful place to bring all of our championships,” Annis said. “It allows us to accelerate our mission and our vision as a non-profit organisation.”

But while Annis noted the appeal of the region’s one million annual visitors in helping golf’s governing body to “drive engagement with the history we have responsibility for,” he also said that the state of North Carolina provided compelling incentives to involve more than a commitment of a handful of U.S. Opens. Those discussions intensified over the last year.

“We started thinking if we’re going to work on a larger deal between the USGA and Pinehurst, well we’re hearing that North Carolina is a state that’s known for thinking long term, thinking big picture, their intent on really growing the golf industry within their state, not just in Pinehurst but also beyond. And so we started to engage them in conversation and really started to talk about the potential incentives that would be available should we think about this longer-term, bigger picture relationship,” Annis said. “That’s where we learned from a research, science, and innovation perspective, North Carolina is very focused on attracting organizations and corporations in that space so that there would be this potential for incentive.” 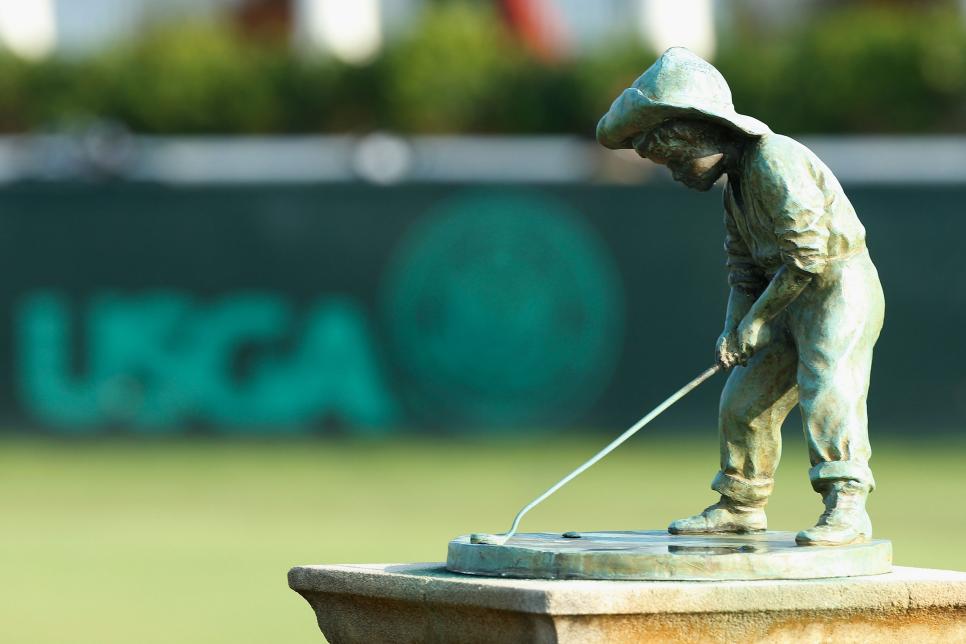 Scott Halleran
The Putter Boy statue is seen near the clubhouse at Pinehurst Resort during a practice round prior to the start of the 2014 U.S. Women’s Open.

While the USGA’s headquarters and museum in New Jersey recently completed an expansive $60 million renovation project, the equipment test center was not included in that construction. An update to the nearly 40-year-old test center was always part of a master plan. Pinehurst and the state of North Carolina presented an option on that plan.

“This deal with the state not only allows us to achieve that second phase of the master plan but to have that piece essentially paid for through the generosity of the state,” Annis said.

The financing is laid out in the new law, which allocates up to $42 million in grants, but specifies grants over the next five years that total $18 million. The law requires a $5 million investment on the USGA’s part, although it also will receive additional local and county incentives in the form of a 90-percent tax break on property taxes.

The move of the test center comes at a particularly vital time in the ruling body’s history of equipment regulation. Earlier this year the USGA released its research on the current state of distance in the game, with Davis stating that “this continuing cycle of ever-increasing hitting distances and golf course lengths [be] brought to an end.” The USGA announced in February the results of its study of driving distance and indicated the Distance Insights Project report “provides notice to equipment manufacturers of this overall area of interest under the Equipment Rulemaking Procedures. This means that we are identifying research topics that have the potential to lead to an Equipment Rule change.” The USGA is expected to announce those specific areas of research by next spring. 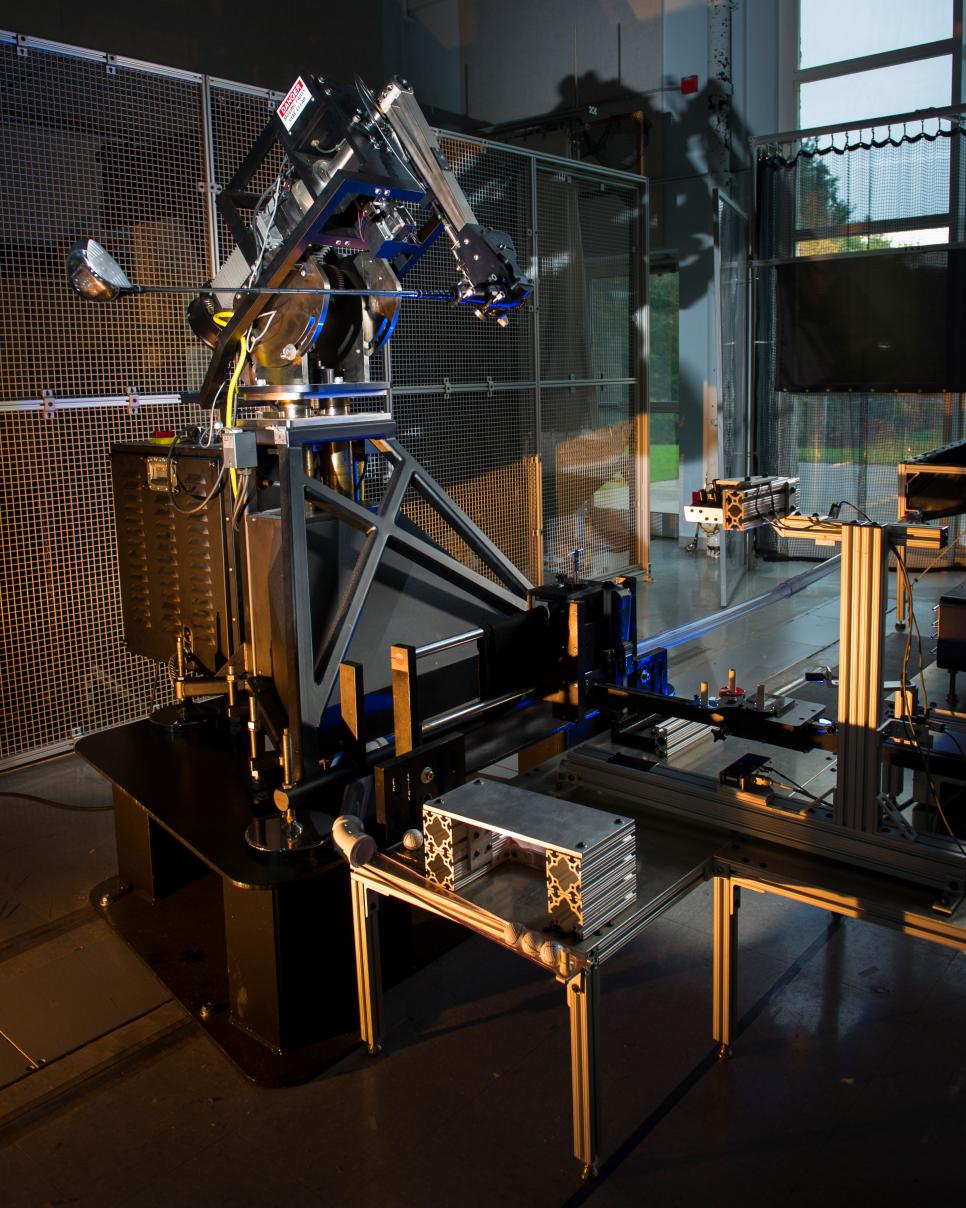 Matt Rainey
The Mechanical Golfer used inside the USGA Research and Test Center in New Jersey.

The current test centre, which opened in 1984 and was ISO certified for excellence in quality management in 2011, was due for an upgrade regardless, said Thomas Pagel, the USGA’s senior managing director of governance.

“It is an exceptional facility but the ISO Certification is also about the process and the people, which are tremendously exceptional,” Pagel said. “A new facility isn’t going to change any of that.”

Pagel reiterated that the constructing of the new test centre in Pinehurst is “completely unrelated to Distance Insights. They are two distinct issues. The Distance Insights work will very much continue. We recognise that there is an issue with the game and distance. It’s something that’s existed for decades, and it’s something that we need to put a stop to. So that very important work will continue here in New Jersey while we plan for the future in North Carolina.”

The USGA remains committed to New Jersey because of its proximity to New York and media outlets and other sports organizations there, as well as to NBC Sports broadcast headquarters in Connecticut. NBC recently agreed to take over the USGA television contract from Fox Sports through 2026.

The USGA move to Pinehurst reflects a deeper commitment from the region to attract golf companies and organizations. The Moore County economic development group Partners in Progress listed attracting golf companies in its strategic plan, and already Golf Pride, the No. 1 grip company in the game, and U.S. Kids Golf have moved parts of their operations there. So, too, has the Carolinas Golf Association. Pat Corso, the organization’s executive director, told the Pinehurst village council on Wednesday night that the presence of the USGA test centre could attract more golf business to the region, including hundreds of jobs. He estimated the economic impact of the additional U.S. Opens and the overall USGA presence to be in the neighbourhood of $2 billion.

“To have the USGA in Moore County puts our community in an enviable position as we look toward the future,” Corso said, indicating the USGA has provided a written commitment to work with his group “to facilitate the recruitment of additional golf-related companies to Moore County and the surrounding region.”