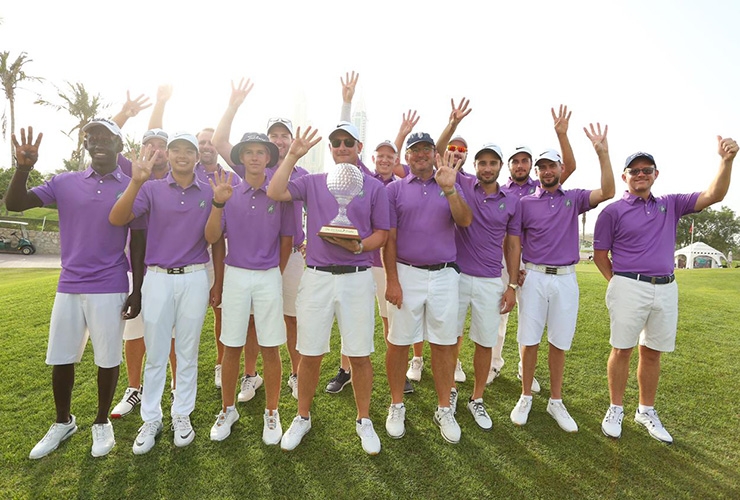 By Kent Gray
Not even an inspirational rev-up from golf royalty could save the UAE PGA professionals from a humiliating fourth successive Dubai Golf Trophy loss.

Heading into Sunday’s singles with a message of support from six-time major champion Sir Nick Faldo to go with their two-point overnight lead following Saturday’s foursomes and fourballs at Dubai Creek Golf & Yacht Club, the Tom Buchanan-lead pros were in pole position.

But a disastrous start which saw the pros lose 7½ of the first eight available points, including the first five matches sent out, saw the Emirates Golf Federation (EGF) amateurs waltz the singles 11-5 for an 18-14 victory overall. It followed 19½-12½, 17-15 and 19-13 victories for the amateurs in 2016, 2017 and 2019 respectively and closed the overall Dubai Golf Trophy tally to 14-6 in favour of the UAE PGA Pros.

“Outfought and outplayed,” was captain Buchanan’s succinct summary afterwards as the UAE PGA Pros contemplate losing the last four editions by a combined 73½-54½.  “We’re bitterly disappointed as we were in a good position after the first day and failed to finish it off. The amateurs boys are just sharper than us.”

Buchanan was the only UAE PGA player to produce three wins but even his 6&4 thumping of Drew Foxcroft in the singles was scant consolation.

“Yeah, three points but sadly means nothing as we lost,” said Buchanan who was a sizzling seven under par when he shook hands with Foxcroft on the Majlis’ 14th green.

“Every year we say that it will be next year but it’s getting harder and harder to beat them as they have so much strength in depth. I set the team out to win and sadly from early in the day it was a struggle. Losing the first five matches was a huge blow for us. But for sure, we will be back in 2020 and see what happens.”

But Sunday belonged to captain Craig Vance and his EGF amateurs who are, ironically, benefitting from the coaching of their vanquished opponents.

History, some long since parked and a result still fresh, hints against Maha Haddioui breaking her LET duck this week but the Arab trailblazer insists she can’t lose either way.