U.S. Open 2019: With Steve Williams on the bag, Jason Day exhibits a new intensity as well 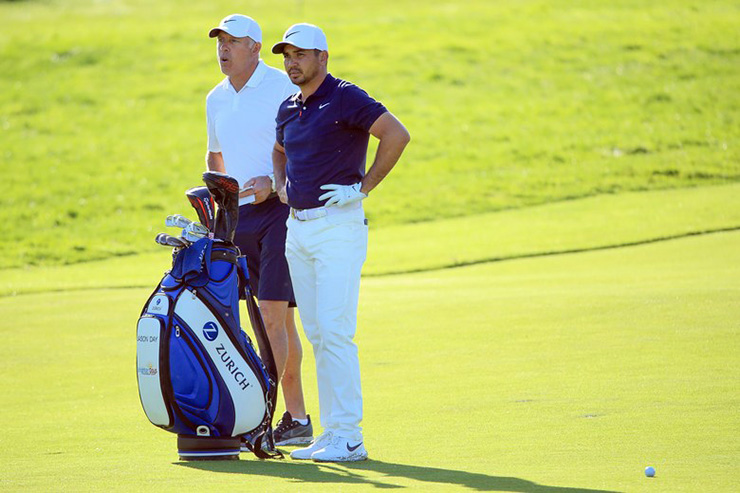 PEBBLE BEACH, CALIFORNIA – JUNE 11: Jason Day of Australia (R) talks with a caddie Steve Williams on the 15th hole during a practice round prior to the 2019 U.S. Open at Pebble Beach Golf Links on June 11, 2019, in Pebble Beach, California. (Photo by Andrew Redington/Getty Images)

By Brian Wacker
Jason Day was all business Tuesday morning, teeing off for a practice round by himself at 6:45 a.m. at Pebble Beach. It’s a habit not dissimilar to that of his boyhood idol, Tiger Woods, who in his heyday was notorious for regularly deploying dawn-patrol rounds.

The other similarity: The guy carrying the bag.

Steve Williams caddied for Woods for 13 of his 15 career major championships, including when Woods won the 2000 U.S. Open at Pebble Beach by a record 15 strokes. At this week’s U.S. Open, Williams is on Day’s bag.

“I am very disappointed with how this year’s progressed,” Day said. “I didn’t play well, and I need to improve that. I think Steve will take me to that next level, and I’m hoping that’s the case.”

The last time Williams caddied regularly was from 2011 through 2017 when he was on the bag for Adam Scott, whom he helped reach No. 1 in the world and win the 2013 Masters before eventually going into retirement.

Before that, he spent a dozen years alongside Woods, and before that Greg Norman, Ray Floyd, and others. How long the partnership with Day will last is still to be determined but it will be for at least this year.

Perhaps more notable is what it signals for the 31-year-old Aussie.

Five seasons ago, Day won five times, including his first major at the PGA Championship at Whistling Straits, and reached No. 1 in the world. He followed by winning three more times in 2016, including the Players Championship.

But after a frustrating 2017 in which Day failed to win and his relationship with his caddie/coach Colin Swatton had become strained inside the ropes, Day parted ways with Swatton as his caddie, retaining him in only a coaching capacity. He then employed Luke Reardon and Rika Batibasaga, two friends he grew up with in Australia who both live not far from Day in Ohio.

Day won his first start of 2018, at the Farmers Insurance Open and again at the Wells Fargo Championship a few months later. But he ended the year ranked 14th in the world, his lowest year-end ranking since 2012.

Through his first 11 starts of 2019, he has four top-10s but no victories and has rarely been in contention.

Then came a missed cut two weeks ago at his hometown event, the Memorial. Feeling that he was continuing to underachieve in his career, Day placed a call and asked Williams to come aboard.

“It’s nice to have someone with experience, that has unbelievable experience in major championships, and also, on top of it, have the experience of that winning pedigree with regards to the players that he’s been with,” said Day, who added he’d been contemplating a change for the last couple of months. “It was a little bit intimidating to have him on the bag, to be honest. He’s had a lot of great ball-strikers that he’s worked for. I was excited and intimidated in the same breath.”

To Day’s point, the two spent a sun-splashed morning along the Monterey Peninsula with Day playing 18 holes and working through clubs and yardages; scenarios and the effects of various weather conditions; and playing each shot as if it counted for real.

Day’s usually chatty demeanour carried a more focused tone throughout, with Williams the most visible extension of that on the driving range as well as the course.

It was clear they were there to work.

On the par-3 17th, for example, Day’s first tee shot flew the green and nestled in thick rough. He re-teed and stuck the next one to a few feet. Nonetheless, Williams told him to play the first ball, and he chopped it across the green before eventually getting up an down for what would have been a bogey.

The same routine carried out on other holes, too, no matter where each shot landed.

“I know that his drive and his will to be successful is very, very high,” Day said of Williams. “He’s kind of a no-BS kind of guy. He’ll tell you straight. He told me, ‘If you’re not working hard enough, I’m gone.’”

Usually, it’s the player who does the firing, not the caddie. Given Williams’ resume, though, Day is more than willing to listen and often let the New Zealand-born Williams lead the way.

“I told Steve, ‘Look, my goal is to get back to No. 1 in the world,’” Day said. “I want to do everything I possibly can to get there. If I need to do whatever you need to tell me, I’ll do it. He said that being No. 1, there’s a lot of sacrifices that come along with that. And we both understand what that means.”

For Day, that means rededicating himself. Hiring Williams was the first step.

“I saw an enthused, reinvigorated and motivated Jason,” Swatton said of the two-day practice session with Williams on Day’s bag over the weekend at Pebble Beach. “Everything I’m hearing is that he’s walking around with more swagger and a different demeanour.”

And perhaps, be it this week or another one soon, with another trophy, too.