U.S. Open 2019: We used real data to showcase the stark difference between how average and pro golfers play Pebble Beach 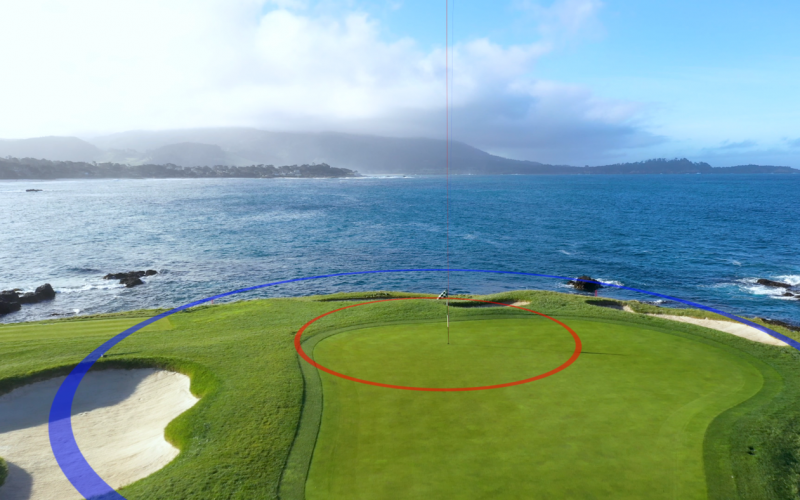 By Mike Stachura
With the U.S. Open’s return to Pebble Beach Golf Links, the national Open’s reputation as golf’s most brutal test tends to soften a bit amidst the poetic ramblings extolling “the world’s greatest meeting of land and sea.” But while Pebble Beach might stand as the picture postcard for American golf, the fact is for mere mortals it is much more beast than beauty.

And thanks to data from Arccos Caddie, the GPS stat-tracking app, we know just how hard Pebble Beach can play. In short, harder than those manufactured rocks that line the seawall on its legendary 18th hole. Real numbers show that Pebble Beach has been almost six shots harder than the average of all other rounds on all other courses tracked by Arccos this year as the course prepares to host the U.S. Open.

Of course, with its small greens, angling fairways and exposed conditions, Pebble Beach can be difficult for the elite players of the PGA Tour, too. Even as one of the shortest tracks during the year at barely 6,800 yards, Pebble Beach held the bombers at bay with a scoring average that was just a blip over par at 72.05 for the final round of this year’s AT&T Pebble Beach Pro-Am. Only four other courses had higher actual scoring averages this year, and those courses (Sheshan Golf Club, Bay Hill, Bethpage Black and Muirfield Village) played an average of 550 yards longer than Pebble Beach played on the PGA Tour.

Remember: Those scores for average golfers—and for PGA Tour pros—is from at best the resort’s blue tees, not the U.S. Open tees that will play next week at more than 7,000 yards. (More likely, the Gold at 6,400 yards or the White at 6,100 yards because the average Arccos user is a 14-handicap. And that means his average score at Pebble Beach is at least a solid 11 shots worse than his handicap.) It obviously would get much worse for average golfers if they played the 7,075-yard U.S. Open tees. Not only would there be the challenge of added length, but also the rough would be anything but resort-friendly. Historically, the USGA has sought to have the rough cost players at least half a stroke on average. But for average golfers, the thick stuff could yield twice or three times that much damage.

And still, when we think of Pebble Beach, we don’t think of brutality as much as we think of beauty. Even among Golf Digest’s 100 Greatest Courses, while Pebble Beach is firmly ensconced in the top 10 at No. 7 overall, it does not rank in the top 20 among our panellists when it comes to Resistance to Scoring. It ranks third in Aesthetics, trailing only Augusta National and next-door neighbour Cypress Point.

Maybe these numbers will change your mind.

The Arccos scoring shows no letup from Pebble Beach, regardless of the length of the hole, either.

The triple-bogey percentage for Arccos users at Pebble Beach this year (14.6) is nearly twice what it is for non-Pebble Beach rounds.

Even though Pebble Beach’s greens are some of the smallest in golf (and the smallest on the PGA Tour) at an average of 3,500 square feet, Arccos users were an average of 25 percent farther away from the hole on their approach shots compared to rounds on other courses.

Like we saw with Arccos data comparing how average golfers likely would have played PGA Championship venue Bethpage Black versus what Brooks Koepka did there, the way average golfers experience Pebble Beach is equally removed from elite golfers. The average drive for all Arccos users (that’s men, women, seniors, low handicappers, high handicappers and everything in between) at Pebble Beach was 201 yards. For PGA Tour players at Pebble Beach, it was 71 yards farther. (Driving distances tend to be short at Pebble Beach because driver isn’t always the club off the tee and weather conditions in early February are not the fastest and the firmest. For the year, PGA Tour average driving distance is more than 90 yards longer than our Average Joe’s.)

On a selected hole where PGA Tour players really let out the shaft, that gap is even more overwhelming. Take the second hole, which normally plays as a par 5, but will play as a par 4 during the U.S. Open at 516 yards. During the AT&T Pebble Beach Pro-Am, the average drive was 296 yards. Only 11 percent failed to reach the vicinity of the green with their second shots. By comparison, given typical club distances from Arccos data, the average golfer was still a full swing from the green for their third shots on the shortest par five on the course. The average score on the second hole for an Arccos user at Pebble Beach is approximately 6.2 (this number is an estimate based on Arccos Caddie projections of how the second hole plays as the easiest of Pebble Beach’s four par 4s). By contrast, for PGA Tour players it played to a 4.37 at the AT&T Pebble Beach Pro-Am this year when it played as a par 5. (You might remember that the second hole also played as a par 4 during the 2010 U.S. Open and went a long way toward costing Dustin Johnson his first major after he made a final-round 7, completely erasing his overnight three-stroke lead less than half an hour into his final round.) 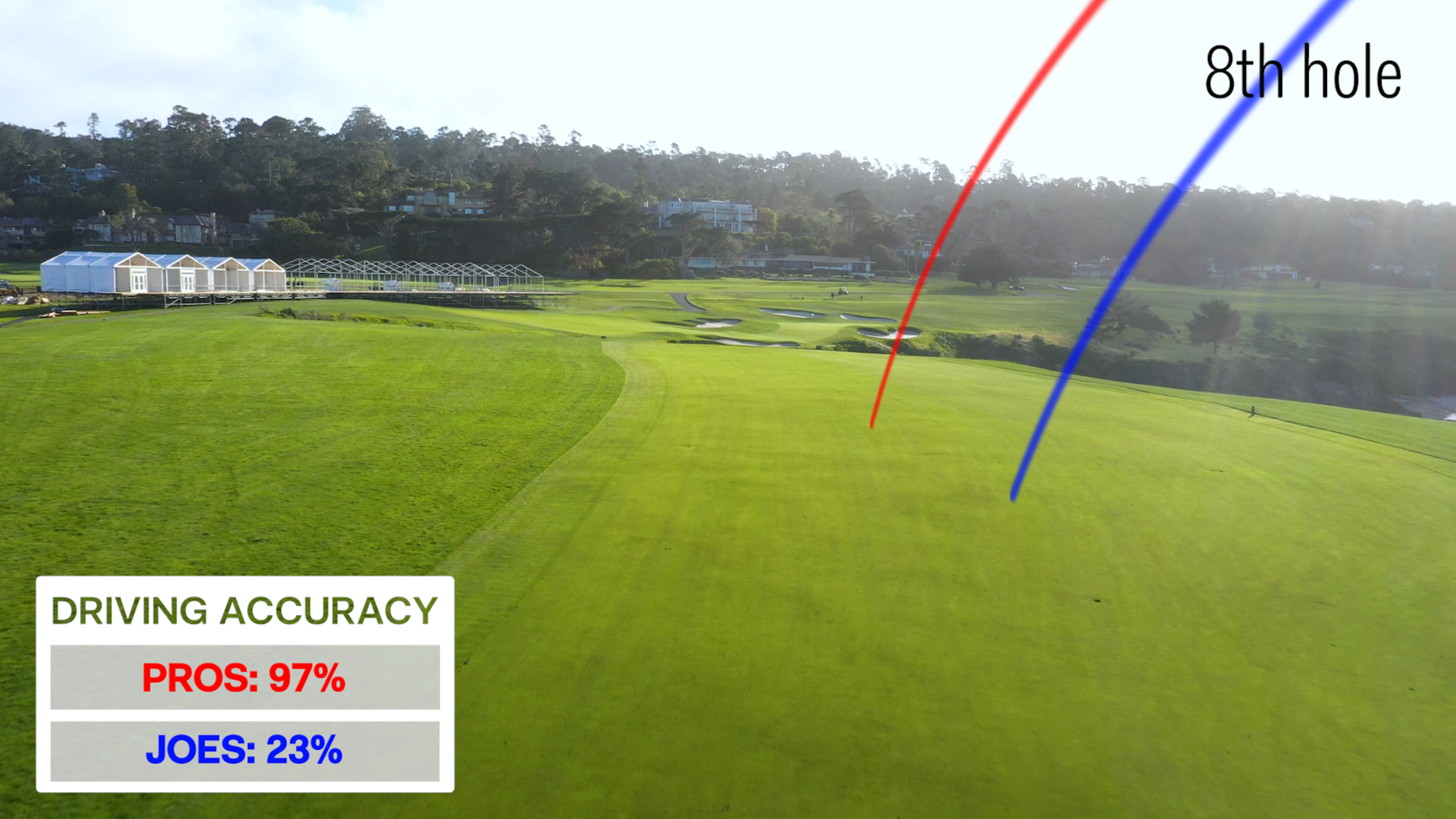 On the picturesque eighth hole, whose approach shot from the cliffs is one of Jack Nicklaus’ all-time favourites, the predictions for how average golfers would do are nearly as dire. The Arccos Caddie feature, which uses artificial intelligence and machine learning to recommend the smartest way for a given player to navigate a hole, suggests the typical golfer’s best strategy is to hit a driver to the edge of the cliff and then flight an iron 150 yards as a layup to the strip of fairway short of the perilously perched green. Even with a clean lie and a straightforward pitch to the green, the average golfer’s inconsistency leads Arccos Caddie to project the prototypical average golfer to make a double bogey with what it calls this “optimal strategy.” Using Cobra Connect data powered by Arccos, the Average Joe’s greens in regulation success rate were he to attack the eighth hole with a 5-wood is 13.6 percent. Meanwhile, during the AT&T Pebble Beach Pro-Am, the stroke average for the eighth hole was almost two shots better at 4.24. 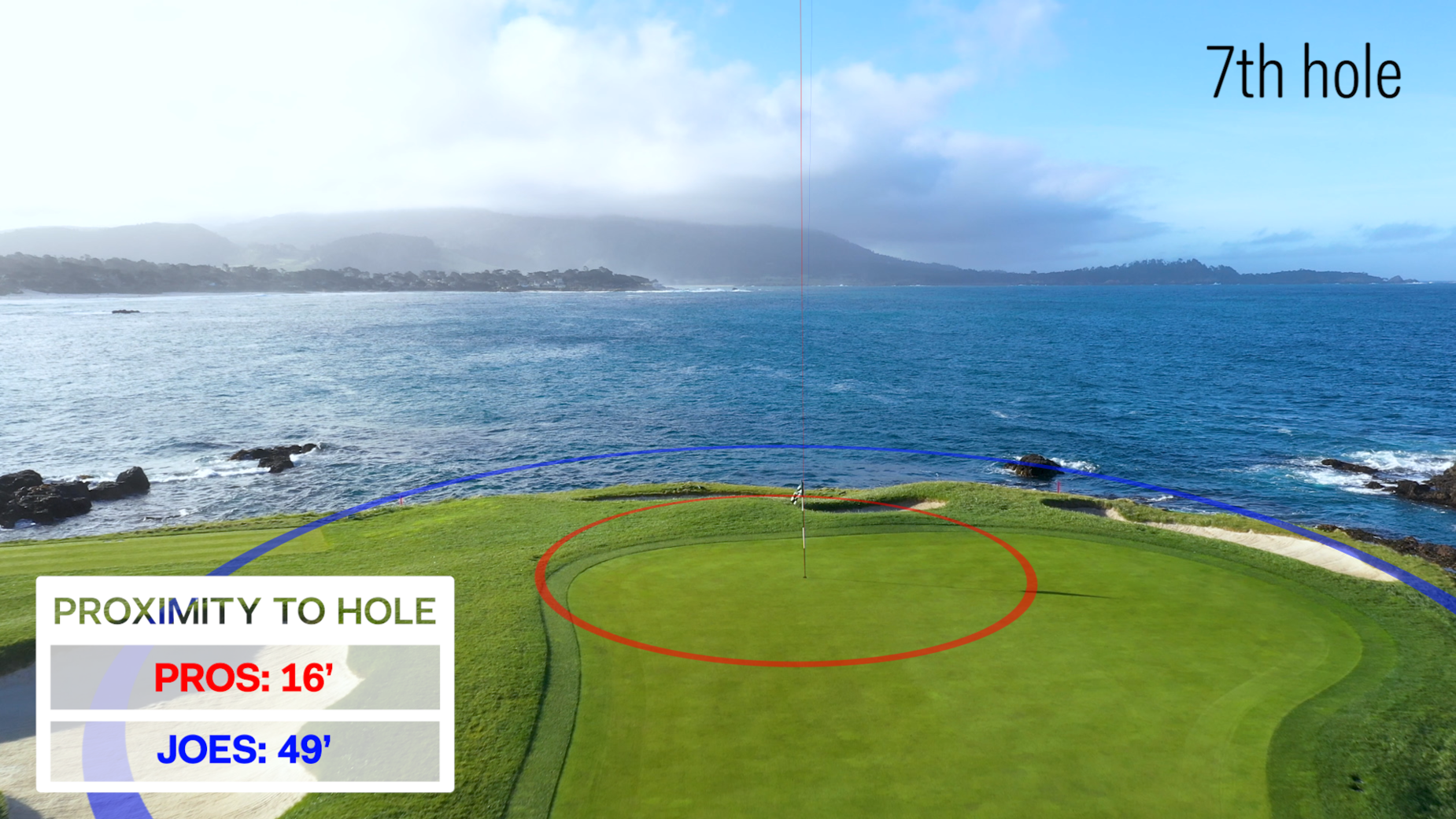 On the seemingly easy par-3 seventh hole, the Average Joe is only hitting the green less than half the time according to Cobra Connect numbers, while a PGA Tour player hit that green 73 percent of the time with an average proximity to the hole of 16 feet. (The water and bunkers and relative inaccuracy make the seventh play harder than any of Pebble Beach’s par 3s.) For Arccos users playing Pebble Beach this year, that proximity to the hole on the short 7th hole is about three times that. However, on a tough par-3 hole like the 17th, PGA Tour players still managed to hit the green 69 percent of the time. According to Cobra Connect’s Arccos-powered data, the average golfer’s greens in regulation percentage from the 208-yard tee is barely 7 percent—that’s assuming he could get a 3-wood there. In other words, PGA Tour players would hit the green 10 times more often. Extrapolating further, a typical Arccos user would only get up and down 20 percent of the time. That means average golfers are missing the 17th green more than 90 percent of the time and then are missing the green again with their next shot another 80 percent of the time. That pushes a reasonable estimate for what an average golfer might make on the 17th hole to be many more double bogeys or worse than there would be pars for an average of approximately 4.55. That’s about 50 percent worse than the average PGA Tour player’s score on the 17th hole earlier this year (3.04).

Again, the best players were and will be again challenged at Pebble Beach, but compared to the rest of us, they’re still playing a different game. It’s a game that’s at least three or four times better than ours, or so the numbers appear to say: 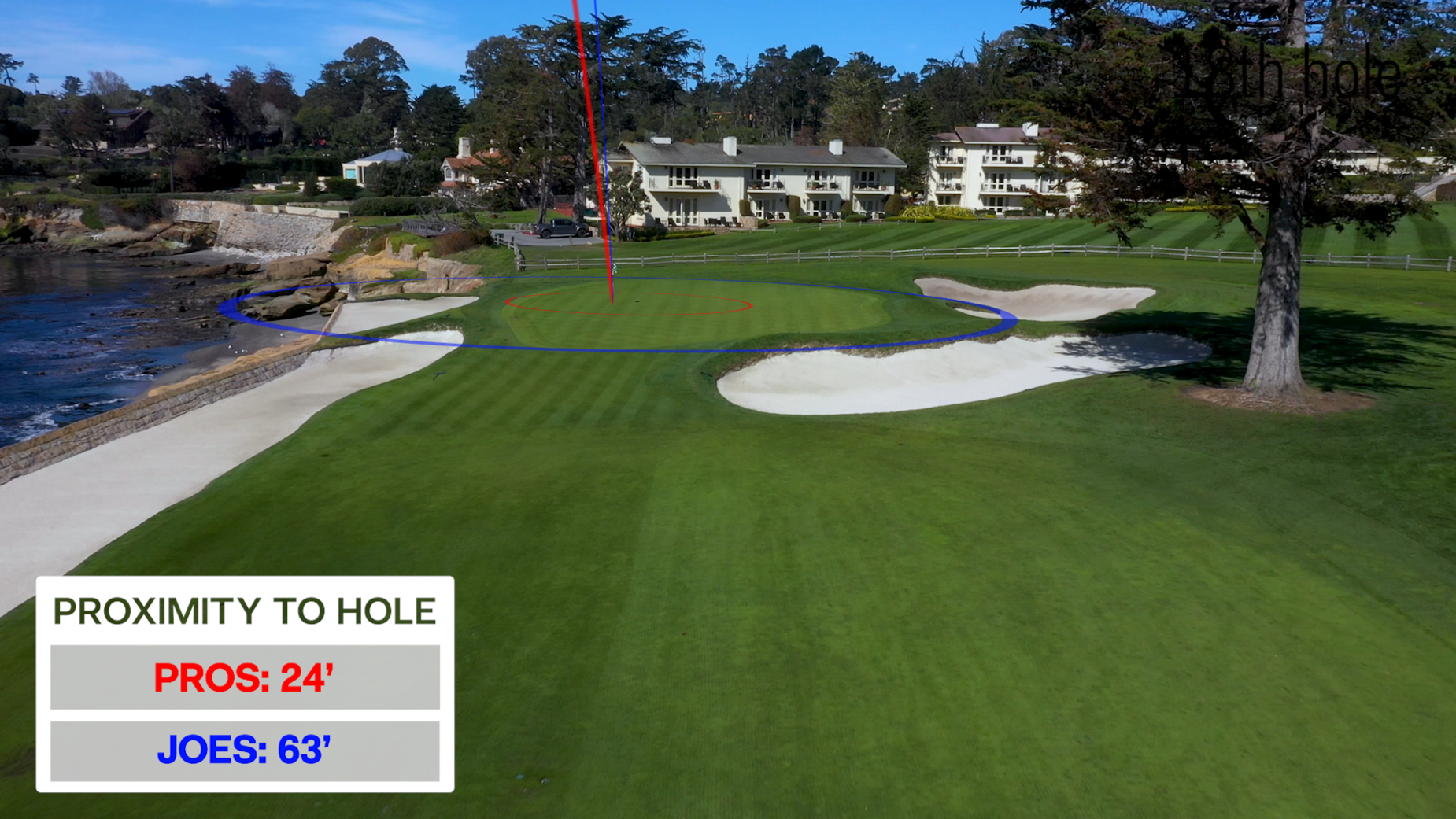 And yet, despite all that average golfer carnage, they still flock to play Pebble Beach. The course averages more than 60,000 rounds a year, and at $550 per man, plus another $150 for the caddie (with tip), that works out to almost $7.25 a swing, or nearly $1,400 for every birdie. That’s right, the average among all golfers visiting Pebble Beach might have to go through at least two full rounds to record just one birdie.

All things considered, though, that seems a small price to pay for the view.