U.S. Open 2019: Rory McIlroy is still in it, but Pebble Beach’s par 5s have diminished his chances 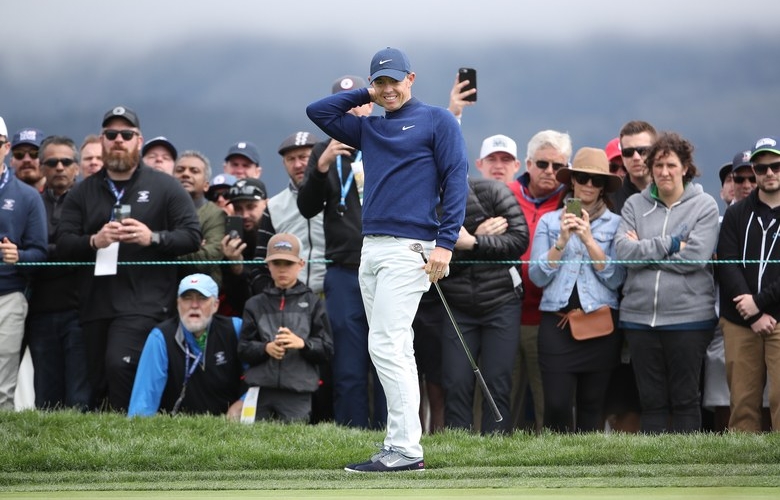 Rory McIlroy of Northern Ireland reacts to a shot on the sixth hole during the third round of the 2019 U.S. Open at Pebble Beach Golf Links on June 15, 2019 in Pebble Beach, California. (Photo by Christian Petersen/Getty Images)

By Brian Wacker
PEBBLE BEACH — After a one-under 70 on Saturday, Rory McIlroy enters the final round of the U.S. Open five strokes off the lead of Gary Woodland.

Not out of it but not exactly breathing down his neck.

“I’ve been very pleased with how I’ve played all week,” McIlroy said matter-of-factly. “I felt for the most part today I did the right things. And I need to do 18 more holes of that, but just get a little bit more out of the round [Sunday] than I did today.”

What he could have gotten a lot more out of this week, however, was his play on Pebble Beach’s three par 5s. McIlroy birdied two of them—the sixth and the 18th—on Saturday, but for the week the 30-year-old four-time major champion is a cumulative ho-hum even par on the them through the first three rounds.

Comparatively, Woodland is a combined three under on the par 5s. Second-place Justin Rose, who is a stroke back of Woodland, is six under. Brooks Koepka, tied for third four back, is three under. Even Chez Reavie, also tied for third, is four under.

You get the idea.

McIlroy, though, drove into the rough on each of them in the opening round and when forced to lay up hit indifferent approaches.

Things weren’t much better in the second round. His second shot on the sixth landed just short but his chip to a back pin ran through the green and onto the fringe and he had to settle for a two-putt par. Then there was the disaster at 14, where he again found rough off the tee, laid up, spun his wedge off the front of the green, dumped his fourth shot into the greenside bunker short and two-putted for an inexplicable seven. On the 18th, after driving into the rough (see a theme?) he was forced to lay up before he again spun his wedge off the front.

By comparison, when McIlroy won the Players earlier this year, he played TPC Sawgrass’ four par-5s in a combined nine under.

Not all is lost for McIlroy, though. The biggest final-round comeback in a U.S. Open was seven strokes, famously by Arnold Palmer in 1960 at Cherry Hills. He’s only five back. But had McIlroy played those nine holes in just three under, he’d be alone in third place and just two strokes back. Four under, he’s one back.

Easier said than done sometimes, even for a player of his prodigious length.

Asked how he’d respond to those who say the U.S. Open is playing easy, he cracked, “Come play it yourself.”