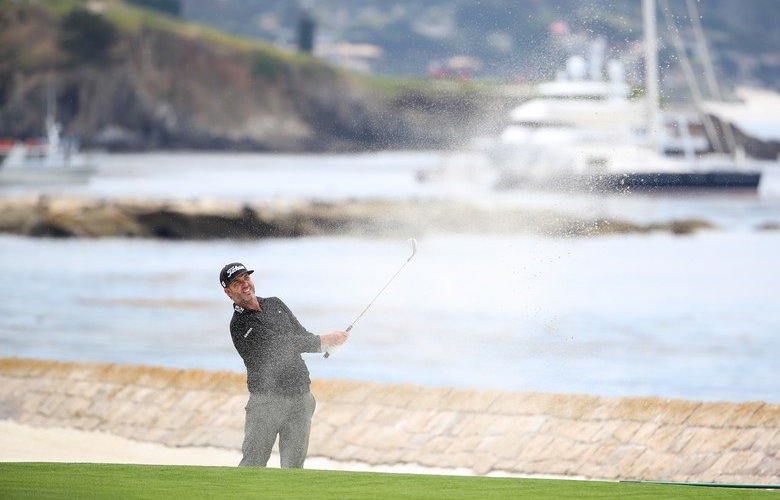 By Joel Beall
PEBBLE BEACH—He missed the cut last week at the RBC Canadian Open yet jumped in the Official World Golf Ranking, a beneficiary of that fickle minimum divisor. It wasn’t a substantial vault, in a system that many consider more arbitrary than arithmetic. But it was substantial in the larger sense, as the move earned him a spot into the U.S. Open on Monday.

And on Thursday morning at Pebble Beach, Scott Piercy made the most of his 11th-hour invite.

Piercy turned in a four-under 67, good enough to see his name on the leader board.

“Anytime you can be under par at the U.S. Open is a good thing,” Piercy said. “I got off to kind of a fiery start, which is great, and then tried to hold on there in the middle and tried to make a couple coming in.”

For a short window, it appeared Piercy had something special cooking. The 40-year-old birdied three of his first five holes, then sent a warning shot heard throughout Monterey when he nearly had an albatross on the par-5 sixth, his approach from 216 yards settling a foot from the pin.

“Just hit a flat cut with a hybrid, just let it do what it did, just roll up,” Piercy said. “You don’t want to hit it past that flag. If you miss it pin-high and off the green, it’s a hard chip. Worst case I was trying to land it short and be short, and it just came off perfect.”

He parred the famous seventh, but any aspirations of an Open record were doused at the eighth. His drive found Pebble’s gnarly rough, and his layup failed to find safety, barreling into a bunker some 30 yards short of the green. His sand shot only got halfway home, and he couldn’t get up-and-down for bogey.

Piercy was able to right the ship with pars on the difficult ninth and 10th, and returned to five under thanks to birdies at the 12th and 14th.

Scott Piercy is on ? today at Pebble Beach.

He’s made an eagle and five birdies to lead by two.pic.twitter.com/lgVjLeGT6W

He even had a look at 65 on the 18th with a 23-footer for bird. Alas, he curiously left that seven feet short, and could not nibble the remaining meat off the bone.

After that lights-out start, a 67 likely fells a tad underwhelming. However, this is the U.S. Open; mistakes are expected, even the self-inflicted ones. The idea is to get in as many jabs as received, and on that front, Piercy has to be happy returning to his corner after Round 1.

Especially given his interesting tour of the course. This week was supposed to put a premium on accuracy; Piercy’s round took that notion and dropped it on its head, hitting just six of 14 fairways.

“The full swing is just a little bit off,” Piercy said, “and I drove it in the rough. And then you’re kind of scrambling from there.”

Scrambled he did. Piercy managed to find 12 greens, boasting a 4.90 strokes gained/approach figure, best of the morning wave.

“One thing I did really good today is leave it on the correct side of the hole,” Piercy said. “So I didn’t really have a lot of downhill sliders, had a couple for par coming down the last stretch. Some of the birdie putts were more up the hill, like right edge putts, something like that. So when I had birdie putts early on I was — I probably had the easier of the birdie putts on the hard ones.”

Despite the missed cut up north—or his 150/1 odds beginning the day—this performance isn’t totally out of left for Piercy. He has six top 10s on the season, highlighted by a T-3 at RBC Heritage and a T-2 at the Byron Nelson. He’s also had success at this venue, finishing T-10 at the AT&T Pro-Am in February.

As well as this tournament. Piercy finished runner-up at the 2016 U.S. Open at Oakmont, albeit a distant three strokes. And he entered the weekend at last year’s event in second place, but, playing in one of the final groups, came out on the business end of the USGA’s set-up mistakes, shooting a nine-over 79 on that infamous Saturday afternoon at Shinnecock. Call Thursday’s performance the first step in righting that wrong.

Piercy’s lead didn’t last, Rickie Fowler, Louis Oosthuizen and Xander Schauffele topping him by a shot. And with conditions remaining tame at Pebble Beach, there’s a chance a host of others join the four under or better group. But for a guy who was on the outside looking in just five days ago, it’s an auspicious start.

“The ball-striking needs to be cleaned up a little bit, so I’ll be on the range for a little while,” Piercy said. “But 4-under par the first round of the U.S. Open is—I’ll take that every time.”