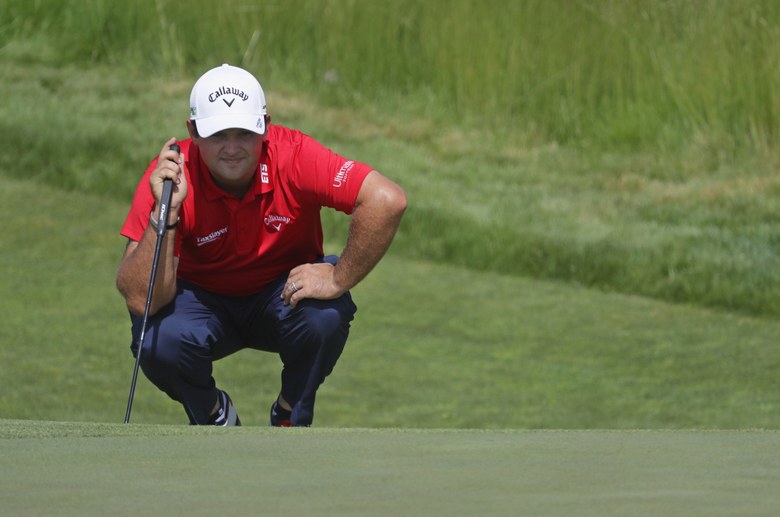 Patrick Reed dressed up Thursday as if he were playing in the Ryder Cup. Blue slacks, red shirt, white hat and belt, and white and red saddle shoes.

Must have made a difference.

With a solid ball-striking performance that included a near ace on the 13th hole, Reed opened the 117th U.S. Open with a four-under 68 at eccentric Erin Hills, only the third time he has started a major with a sub-70 score.

The player who seemingly can’t miss a shot when playing for the Stars and Stripes tends to get black and blue in the major championships. Though a five-time winner on the PGA Tour, Reed has yet to record a top-10 finish in his 13 major appearances. In his most recent try, the Masters, Reed submitted dyspeptic digits of 76-77 to miss his fourth major cut and second in his last four.

If there were a championship that could get his patriotic blood pumping, you’d think it would be the U.S. Open. He didn’t disagree with the premise. “It would,” said the native Texan, 26. “A lot of times being an American, it means a lot. Really, right now it’s just go out and play as well as I can, and hopefully late Sunday I’m up there playing good golf.”

Two years ago Reed opened 66-69 for a share of the 36-hole lead at Chambers Bay only to backpedal on the weekend and end up T-14. Last year he missed the cut at Oakmont. His hit-or-miss performances in the majors are a head-scratcher for a player who doesn’t lack for confidence. And he certainly doesn’t lack for motivation when he competes for America in the Ryder Cup or Presidents Cup.

What he did last year at Hazeltine National, scoring 3½ points and taking down World No. 2 Rory McIlroy in an electric singles match, hasn’t carried over to individual stroke play events, including this season, in which he has just one top-10 finish. Majors should get the juices flowing, though.

Except he needs juice earlier. “I haven’t had an opportunity to be late in a major on Sunday in a major yet, so it’s kind of hard to say,” Reed replied when asked about bringing his cup performances to the majors. “It definitely helps other golf tournaments I’ve played coming down the stretch or other golf tournaments coming down where I need a birdie to make a cut or something like that. It’s definitely something it doesn’t really rattle you as much. It doesn’t give you butterflies. You still have to go out and play golf. I feel like I’m right there.”

He made Thursday’s round, in which he hit 13 fairways and 13 greens, appear stress free. “I stuck to my game plan today. The two bogeys I had today I really didn’t feel like I hit bad golf shots,” he said. “Every time I stepped on the tee, I tried to play really aggressive. For me it’s more of a challenge not playing aggressive, because there’s a lot of times I want to go down the most aggressive line I can. Go for every flag.”

That can get you in trouble. But then there was the near ace at 13, when his 6-iron on the 227-yard hole playing downwind hit the flagstick.

“It would have went in if the stick were skinnier,” he joked. “It was perfect. I was just watching it, kind of went up the slope and thought it was going to be really good, because it wasn’t really moving that fast. When I got up there, it was not even a foot short of the hole.”

Weird, but wanting to play well so intensely hasn’t hurt Reed in team events. But in his early major appearances he simply tried too hard, put too much pressure on himself. He thought he “had to play well.” His approach of late is to loosen up, which seems counterintuitive.

“The past couple of years, just kind of go out and play golf, [think] it’s just another golf tournament,” he said, trying to talk himself into it.

So, then, how come the red, white and blue?

Perhaps not just another tournament.