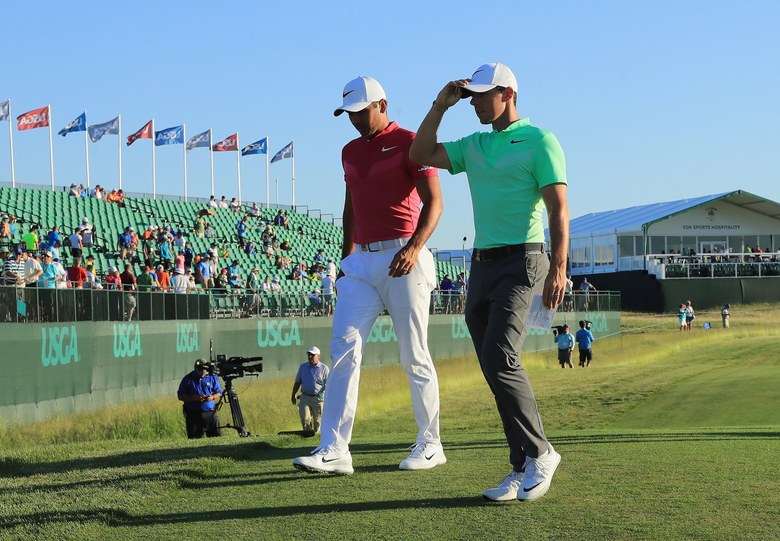 Overlooking the 18th hole at Erin Hills from high above is Holy Hill, a towering Catholic basilica that sits atop the tallest point in southeastern Wisconsin, soaring 1,335 feet and three miles from the course.

For Rory McIlroy and Jason Day just to make it to the weekend at the 117th U.S. Open it will take a climb of similar proportions. Not even divine intervention would be enough if they play anything like they did on Thursday.

In a disastrous afternoon for both, McIlroy shot 78 and Day 79. The lead is seven-under 65 (Rickie Fowler) but forget about that for now. Just making the cut — currently at a very-early even par — might be a miracle.

“Well, it all started so well,” McIlroy said.

Indeed it did. Day pitched to six feet on the par-5 first and made the putt for birdie. One hole later, McIlroy one-upped him, reaching the green on the short par-4 with a 320-yard bomb before rolling in a 28-footer for eagle.

On No. 3, McIlory missed a five-footer for par. Bogey.

At the fourth, Day hit his chip from short of the green heavy and watched as it rolled back down the shaved bank and into the rough. Then the same thing happened again. One more chip and a two-putt from 20 feet later and he was in for triple.

It didn’t get much better from there for either player.

McIlroy played his final 11 holes in seven over, which included a 42 on the back. Day sprinkled in a few more birdies, including one on the par-5 last, but was six over for his last 11 holes, which included another triple-bogey 7, this time on 10 after finding the fescue, chopping out sideways to a bunker, another hack out and eventually onto the green with his fifth before missing a 20-footer.

It was the first time Day carded two triples in the same round in his career on the PGA Tour.

“It’s weird, it’s not like I gave up. It’s tough because out of every major championship I’ve played this is probably the best preparation I’ve had going into the event.”

McIlroy couldn’t quite say the same. Slowed by a rib injury, he hasn’t played since the Players Championship a month ago. Though he wasn’t bothered by the injury, the rust showed.

“Timing was a little off,” said No. 2-ranked McIlroy. “I started missing some left on the course and tried to sort of correct it on the way in and missed a couple right.

“You cannot play this golf course if you’re not in position off the tee, and I wasn’t in position. Obviously, I paid the price for it today.”

McIlroy hit just five fairways, which tied for fewest in the field, and just nine greens in regulation.

Day, meanwhile, hit nine fairways and a dozen greens, and he birdied three of the four par 5s. But when he did mistakes, he compounded the errors.

“I found some pretty awkward spots out there,” he said. “I’ve got to do a little bit of practice tonight and try to get into it [Friday] and see how it goes. If not, get back to the drawing board and try my best to prepare for the next one.”

Added McIlroy: “I know if I hit fairways around here, the course is still soft enough you can get it close and give yourself a lot of looks for birdies.”

They’ll need them on Friday.