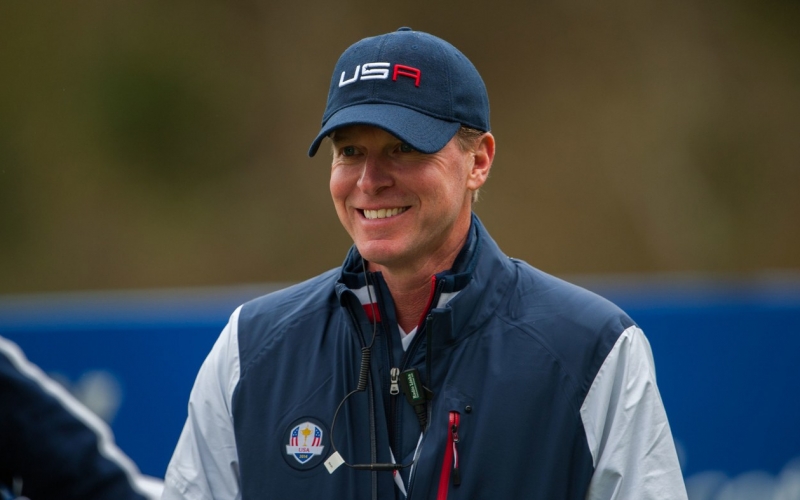 By Shane Ryan
HAVEN, Wis. — “You’re sure bringing up a lot of negatives here, Julius.”

That light jab, directed at the PGA of America’s Julius Mason from United States Ryder Cup captain Steve Stricker, elicited laughs from around the Irish Barn at Whistling Straits on Tuesday morning. There, inside the beautiful, dimly lit stone-and-wood building on a grey Wisconsin morning, Stricker and his European counterpart, Padraig Harrington, shared a stage as they held their first joint press conference, 360 days ahead of the opening session of the biennial match.

Stricker wasn’t actually upset, and Mason—who hosted the event with his usual sangfroid for the live Golf Channel broadcast—was more than fair in his questions. But there’s truth behind every jest, and for a moment it was possible to see the stress underlying Stricker’s challenge. Yes, he has to be concerned about the team’s performance in France. Yes, he has to be concerned that the U.S. has won only three of the last 10 Ryder Cups. Yes, he has to be concerned that Whistling Straits might be slightly harder to modify to his team’s advantage, compared to a course like Hazeltine National was in 2016, because it’s a lakeside links course that’s naturally more difficult to alter (less room to change/expand fairway widths, more waste areas that can’t be altered, etc.). And yes, to the point that provoked his joke, he even has to worry that Americans are 0 for 3 at the PGA Championships played at Whistling Straits.

To be fair, those tournaments were won by Martin Kaymer, Vijay Singh and Jason Day, only one of whom has a remote shot of playing for Team Europe. But it doesn’t disguise the truth that Stricker has a challenge ahead of him, and the heartening part of Tuesday’s press conference for American fans is that he seems to clearly grasp that challenge.

It’s hard to unearth any huge revelations this far ahead of the Ryder Cup—both captains have been mostly involved with administrative details to this point, and both sounded politely excited to moving past the “choosing clothes” portion of their duties. But to the extent that we can get sense of leadership styles, Stricker came across with his usual self-effacing humility. He’s been an assistant captain for three Ryder Cups, along with captain of the victorious 2017 U.S. Presidents Cup team, and he gave every indication that he’ll be a system captain, insofar as the U.S. has a model to follow after the post-2014 Task Force.

A telling moment: When asked about his first or most compelling Ryder Cup memory, Stricker reverted not to his childhood, but to 1993, when he was 26 and Davis Love III made the winning putt at The Belfry.

“I’m sure I watched them before then, but that one sticks out in my memory, being an away match and a tight match,” Stricker said. “Just an iconic kind of picture when he made that winning putt and raised his arms. Knowing Davis now, you know what that meant and what that feels like.” 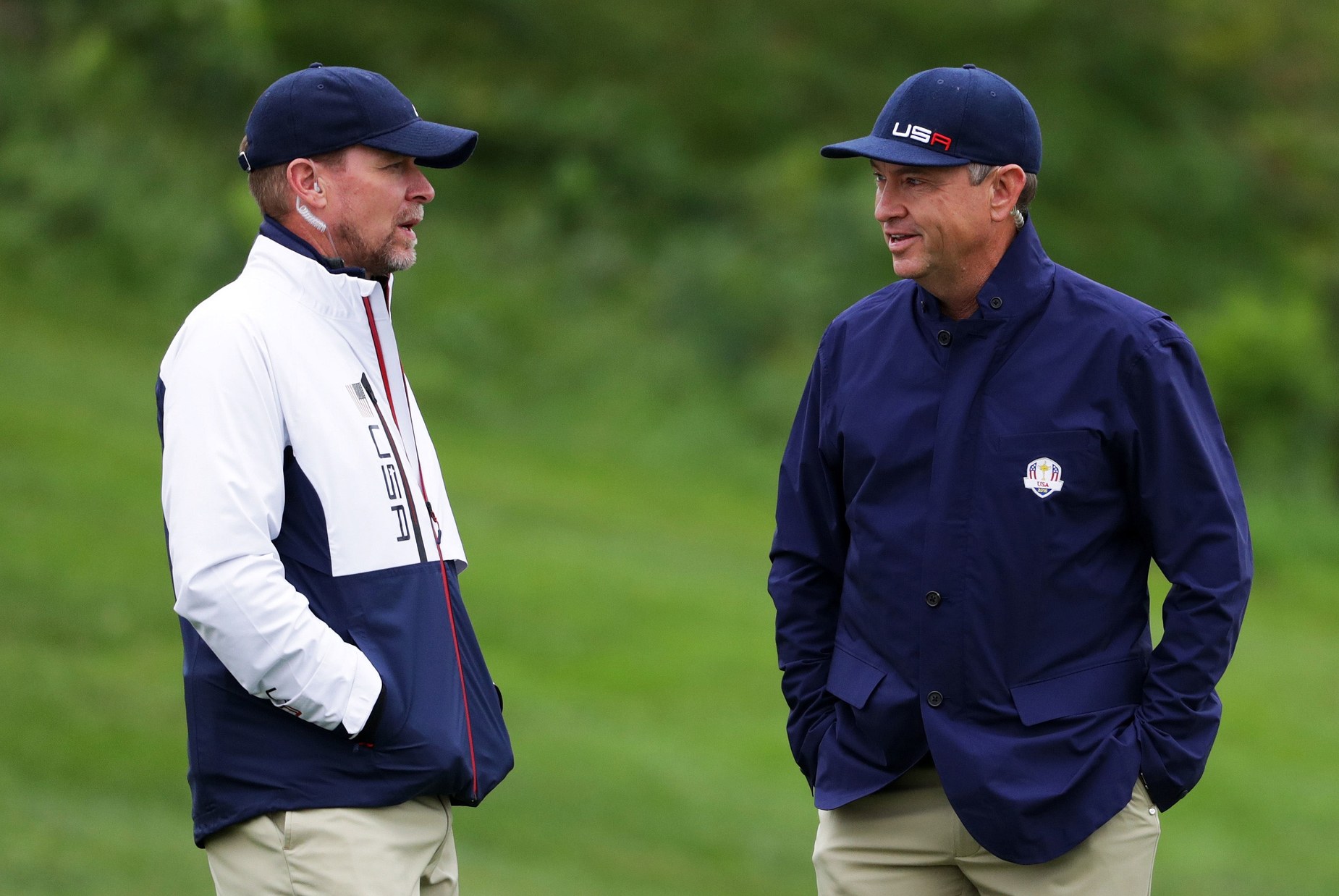 Streeter Lecka/Getty Images
Stricker worked as an assistant captain for Davis Love III during the U.S. Ryder Cup win in 2016 at Hazeltine National.

It’s interesting, too, that this was the last time the Americans won in Europe, which is the most common shorthand used by journalists to depict U.S. futility in the past 25 years and counting. And it’s hard not to notice how Stricker invoked Love, the captain of the last two home Ryder Cups, and the man who received high marks even in the bad-luck loss at Medinah. Love holds the only blueprint for recent U.S. success, especially in the crucial opening two-man team sessions, and though Jim Furyk is Stricker’s only assistant captain to this point, there’s little doubt that Love will play his own critical role at Whistling Straits.

Like Love, it was always a given that Stricker would be a “player’s captain,” considering his reputation as one of the PGA Tour’s nicest men and his general popularity. Yet so was Furyk outside Paris, and a critical question hovering over next year’s iteration will be the obvious one: What have you learned from that loss?

“We have been looking into stats,” Stricker said, late in the presser. “We gave a lot of holes away in France by making something other than par. We made almost as many birdies, if I remember right, during that week in France, but we just gave so many holes away in making different numbers.”

He went on to explain the need for conservatism in key moments, but acknowledged the difficulty in achieving that mentality. American players tend to play aggressively, pursuing birdies on every hole in stroke play, and it wouldn’t necessarily be wise to urge caution and take them out of their games, but Stricker pointed out how that tendency has worked against them in Cups played in Europe. Which is why he’ll have faster greens—”It’s not going to be 8 on the Stimpmeter like it was in Paris,” he said to laughter, with a pointed look at Harrington—and why the rough won’t be anywhere near as high. Still, he acknowledged that tweaking the course is a harder prospect at Whistling Straits.

Of course, Stricker wasn’t about to spill any real secrets to a room full of journalists, much less to Harrington sitting beside him. Following his answer on the course setup, Harrington smiled: “Didn’t give much, did he?”

It’s too soon to think much about pairings, though Stricker said in a Sky Sports interview after that he’ll be using December’s Presidents Cup as a test, of sorts, which has borne varying results over the years. (The U.S. rout at Liberty National in the 2017, for instance, said exactly nothing about what would happen in France.) And it goes without saying that he’ll hope certain players—Jordan Spieth, Justin Thomas, and Patrick Reed, among them—will find their form and earn a place on the team without needing a captain’s pick. 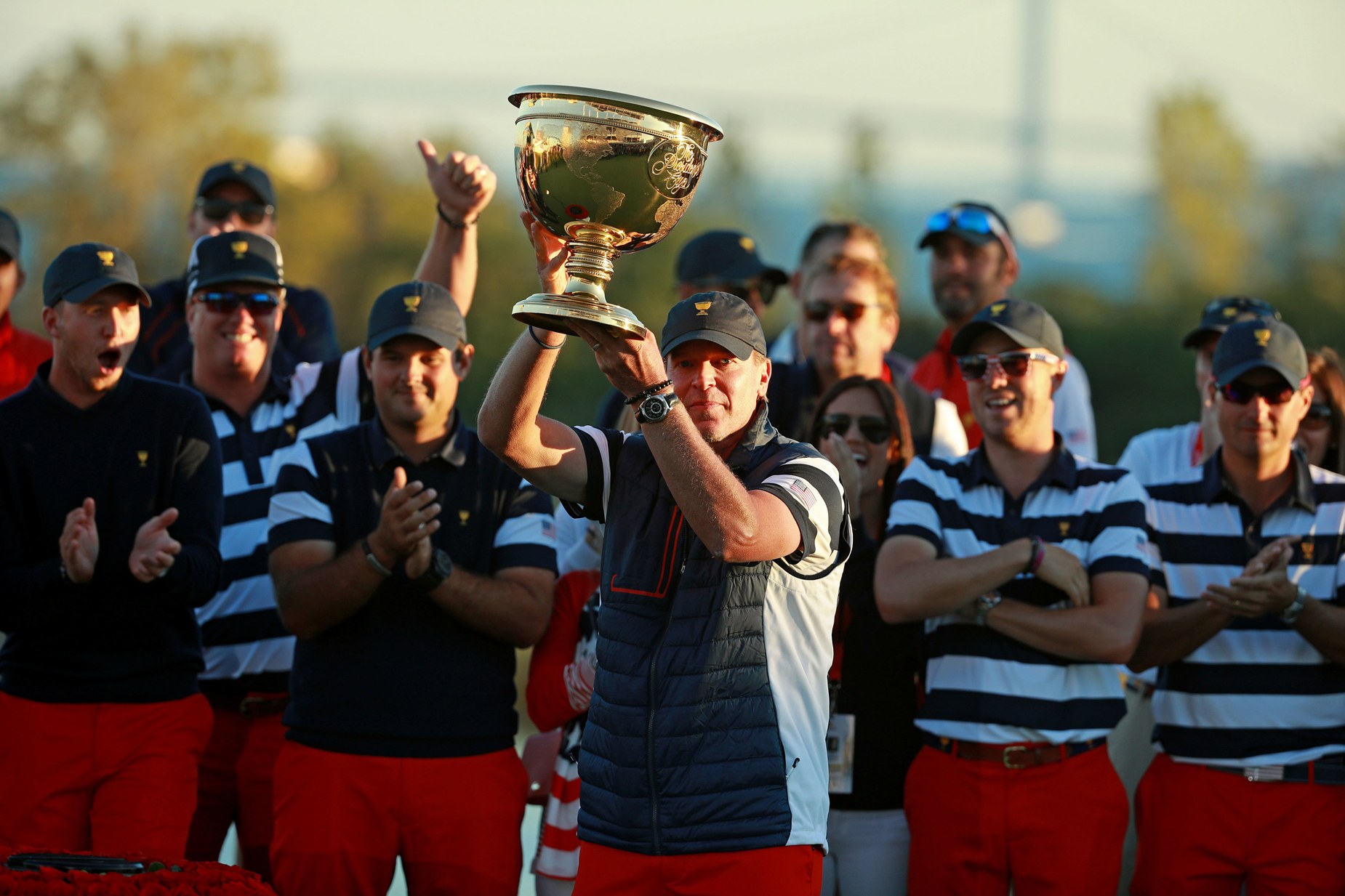 Scott Halleran/Getty Images Stricker holds up the trophy after his U.S. team won the 2017 Presidents Cup in a runaway.

The greatest riddle Stricker will have to solve, though, is not the future—it’s all that came before.

“For me, it’s about moving forward, learning from the past a little bit,” Stricker said. “Taking some of the things that we haven’t done so well in, and then trying to apply that to this next time and next year.”

That’s vague, and purposefully so, but it tells the story of his captaincy just as well as his quip to Mason did earlier. Before the U.S. can establish the kind of prolonged success that Europe has enjoyed in recent decades, it needs to correctly diagnose the problem. The Task Force yielded success at home in 2016, but Paris raised more questions. Stricker’s success will be determined by the players on the course, yes, but perhaps equally so by how well he can parse what worked in 2016 and what has failed so often otherwise. In that sense, we learned on Tuesday morning that Steve Stricker will have to be just as much detective as he is captain, and that he’s ready to begin the great search.