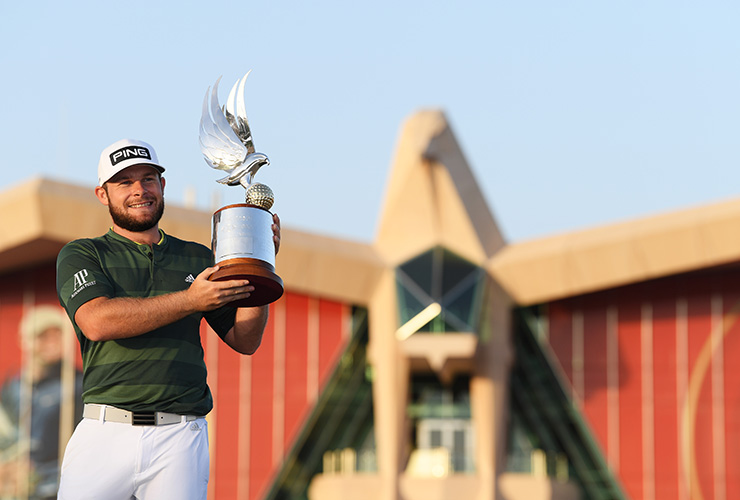 By Kent Gray
Tyrrell Hatton started the European Tour season like a man in a hurry, got angry along the way (kind of) and ended up cruising to one of the most impressive victories the Abu Dhabi HSBC Championship has witnessed.

Sunday at Abu Dhabi Golf Club was set up for an epic dogfight between three of Europe’s top four. Hatton, one back, and two-time champion Tommy Fleetwood, trailing by two, started the final round of the $8 million Rolex Series event looking up at Rory McIlroy, a man clearly keen on shedding his nearly-man tag in the UAE capital. With birdies at the second and third to double his one-stroke overnight lead, the decorated Northern Irishman seemed quite comfortable being cast in the role of formidable frontrunner.

What few counted on though was Hatton grinding all and sundry into submission. With some early pluck, a hint of luck mid round and shot and decision making of increasing quality thereafter, the 29-year-old Englishman produced a fine, bogey-free 66 to win the 16th edition of the Desert Swing opener with an 18-under, 270 aggregate.

Sparked by an eagle three on the 10th, Aussie Jason Scrivener roared around the National’s homeward nine in 29 strokes to match Hatton’s 66 for a career-best solo second finish. McIlroy eventually settled for a scrappy 72 to make it four third placings to go with as many bridesmaid finishes in Abu Dhabi, remarkably consistent and yet still so far from the Falcon trophy. Fleetwood struggled with his driver too, sliding to share of 7th after a closing 73.

After his starring role in the European Tour’s latest social media ditty, #AngryGolfers, Hatton’s icy calmness in the final round might have surprised some in the sparse, COVID-19 restricted galleries and those watching on TV. It shouldn’t have. Long before he sensationally eagled his opening hole (the 10th) on Thursday, added another on the 18th and a third inside 20 holes, Hatton had established himself as a one of Europe’s most dominate forces.

Sunday’s $1.3 million win was the world No.9’s fourth victory worldwide in his last 20 starts, his sixth European Tour title in all and saw him draw level with world No.2 Job Rahm as the owner of four Rolex Series gold stars.

“It’s a bit surreal to be honest,” Hatton said in the immediate aftermath of a victory that will snuggle somewhere around last season’s BMW PGA Championship and Arnold Palmer Invitational triumphs as the most significant wins of a career now on the cusp of the world’s top 5.

“Even knocking the putt in on 18 doesn’t seem like I’ve won the tournament. Obviously, it’s amazing. I’ve always loved starting my season here in Abu Dhabi, and to now add my name on that trophy with so many great champions before me is a huge honour.

“Definitely pinching myself. It’s just very surreal to be that high in the world rankings. I don’t look at myself or — I don’t know how to sort of word it. I guess I’m very — yeah, I’m struggling to find the words how to put it across but I’ll just say it is very cool to be where I am at the moment.”

Brilliant ball-striking and deft lag putting marked Hatton’s work Thursday through Saturday. On Sunday, it was a delightful flop shot from thick rough left of the 3rd green that showed he wasn’t going to wilt in the final two-ball. McIlroy rolled in a beautiful, centre-cuppa for birdie but Hatton’s gritty par save became even more significant when McIlroy inexplicably three-putted the next.

There was a slice, almost literally, of good fortune on the 7th when Hatton blocked his tee shot to a pin cut tight right on the par 3. Hatton rode his luck by duly rolling in the birdie putt.

“These aren’t the coloured trousers [white] to look up in and see your ball sailing towards the water,” Hatton quipped to on-course reporter Tim Barter as he sriding towards victory from the very next tee.

When McIlroy bogeyed the 8th via two lots of tree trouble and a slightly fat bunker shot, Hatton found himself in the lead. A birdie on the 9th, courtesy of a sweet left to right putt from 27 feet that meant he’d birdied the two toughest holes on the course, saw the lead doubled. McIlroy was left completely deflated a hole later when a 34-footer up the slope caught just enough of the cup to disappear beneath the earth instead of perhaps off the green. McIlroy had a slightly shorter eagle putt on the much the same line but conceded Hatton’s binned putt had sucked the wind out of his sails.

The world No.6 did birdie but found a terrible lie off the tee on 11th in another pivotal yin and yang moment. While McIlroy found a deep lie and took a divot TV commentator Ken Brown joked could easily have been turned into a “decent wig”, Hatton saw his ball skip out of the same nearby bunker and wedged on for a settling par. Thereafter, it was just a case of keeping a lid on his emotions which don’t boil over as much as some would have you believe. At least not as much as they once used too when things aren’t going right.

“I think the big moment for me today was the putt on 10. Maybe that was going eight feet past and just hit the hole. That’s huge,” Hatton said.

“Then my tee shot on 11, that’s pitched on the side of the bunker and it’s come out. It could have — we’ve seen plugged lies in the lip this week, so that was another bit of good fortune. So I think that was a big turning point of the day for me.”

Hatton now seems a lock for Whistling Straits and a second Ryder Cup appearance in September, COVID-willing. European captain Padraig Harrington, who made the cut this week, will certainly have been impressed with what turned out to be a runaway victory by four strokes over Scrivener and five over McIlroy.

“It’s massive. I mean, Ryder Cup points started again [this week]. That’s a huge goal for me this year to make that team. I’m absolutely delighted that I’ve managed to pick up a load of points this week, and now I’ll enjoy tonight and then my attention will turn to next week.”

Given his giddy run of form over the last 14 months, and penchant for front-running so calmly in big events, the field headed to Emirates Golf Club for the 32nd OMEGA Dubai Desert Classic shouldn’t count on any form of Hatton hangover. Europe, it seems, has another major champion in waiting. And a double thumbs up to that.