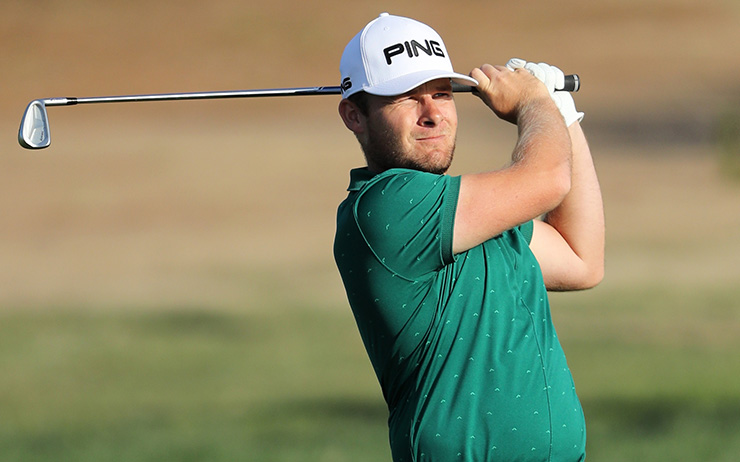 Tyrrell Hatton is once more knocking on victory’s door in the desert after the most impressive of moving days at the 28th Omega Dubai Desert Classic.

The 25-year-old Englishman fired a best-of-the-day and could-have/should-have been better 65 on the Majlis to move from 10 strokes back starting the third round to just seven behind leader Sergio Garcia overnight.

Hatton is in a four-way share of seventh with Frenchman Raphaël Jacquelin, Englishman Chris Paisley and Spaniard Nacho Elvira and will need something special Sunday to mount a serious title challenge.

But the world No.23s charge Saturday and near-misses in his two previous Middle East events – T2 at November’s DP World Tour Championship and T13 at Abu Dhabi a fortnight ago after leading through 54 holes – point to that capability.

Starting on the 10th at -2, Hatton gave little indication of what was to come when he traded a birdie on 13 for a bogey at 15. But the High Wycombe wonder then played the next five holes in a scintillating six-under-par, sparked by a eagle two on the drivable par 4 17th. Four successive birdies followed before further gains on the 5th and 8th.

Hatton had a putt for a 63 on the 9th only for it to burn the left edge of the hole and roll five feet by. Sadly his par save was returned with a tad too much venom, rimmed out of the hole and was admonished with a bath as he flung the disobedient sphere into the lake fronting the testy par 4 in disgust.

The frustrating late blip aside, Hatton was happy with his day’s work having completed his weather delayed second round with two birdies in his last three holes for a 70 alongside Henrik Stenson and Garcia.

“Yeah, definitely. If you said I was going to shoot 7-under (65) after my first seven holes [in the third round}, I probably would have been slightly surprised,” said Hatton whose European Tour breakthrough came at last October’s Alfred Dunhill Links Championship. “It was a great last 11 holes. I’ll try and forget about the 9th green.”

So did you feel a good score coming on?

“No, not at all. I didn’t strike the ball particularly well, especially this morning. And playing next to Stenson and Garcia, probably exaggerated that for me because they hit the ball so good. It was frustrating this morning. Although I scored actually okay, my game just didn’t feel good at all. So I’m very happy with this afternoon’s score.

“The first few holes started off as they had very similar to the previous two rounds. [But then] I hit a really good shot into 17, went for the green, hit it to about six or eight feet and made that and I’m two-under. So set me off and got on a good run there.

“I love being out here. The golf courses [in the UAE] are fantastic and always in good condition. Quick greens is what players like, so I always look forward to coming back.”