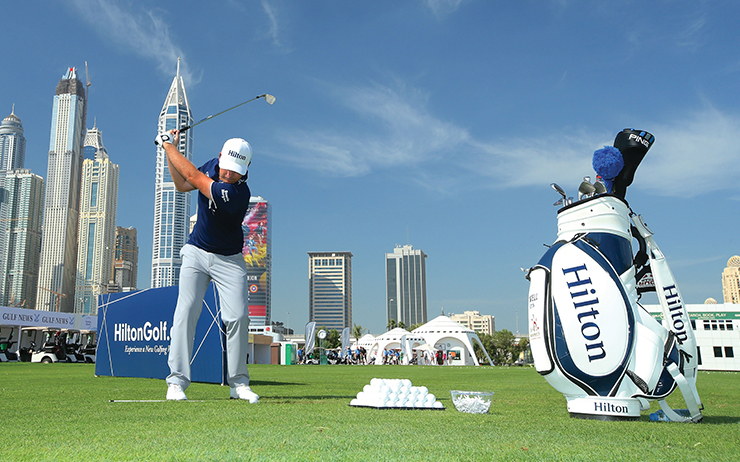 Rising English star and Hilton Golf Ambassador Tyrrell Hatton hosted the inaugural Hilton Invitational at Emirates Golf Club the day after finishing his European Tour season with an impressive top 15 finish at the DP World Tour Championship. With a shotgun start on the famous Majlis course (which was presented in perfect condition), the event welcomed a range of lucky competition winners, corporate invitees and Diamond Hilton Honors members to the European Tour in attendance.

Hatton hosted a pre-tournament clinic on the driving range that offered guests an insight into the practice rituals of one of the tour’s brightest young stars, before the Englishman assumed his place on the picturesque par 3 seventh for a Beat-the-Pro Challenge. At the dinner and prize presentation, Hatton gave a Q&A session where he discussed everything from his favourite aspects of life on tour to his favourite Hilton hotel.

In the competition itself, the team of Phill Robson, Auz Austin, Zhang Luxin and Jin Chunjing compiled an impressive score of eight-under par (80 points) to win by two. The quartet of Hannah Lubke, Ayumi Kitawaki, Toby Adams and Khalifa Al Masaood claimed the runner-up spot on six-under, while one stroke further back in third was the team of UK PGA professionals Rick Shiels and Peter Finch, with Neil Tappin and James Leeman.

Hilton is the Official Supplier to the European Tour and Official Partner to the Asian Tour. Hilton has eight properties in the UAE, with Hilton Invitational guests all hosted at the Hilton Jumeirah Beach