Two tips for playing well in the Middle East 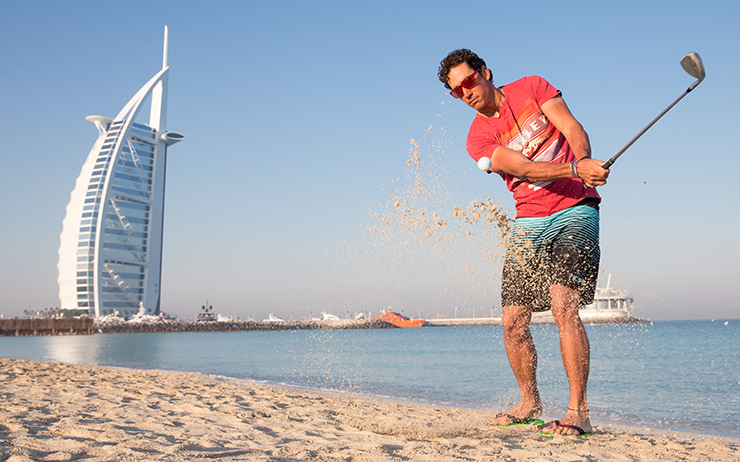 It’s fair to say golf in the Middle East has been pretty good to me over the last few years. I won the Omega Dubai Desert Classic in 2012, contended down the stretch at the Qatar Masters in 2014 and then had my chances in the final group against Henrik Stenson during last year’s DP World Tour Championship. Apart from good putting – which is important wherever you play in the world, for me the keys to playing well in the Middle East are a good driving game, and solid sand play. The courses out here are on the longer side, but the fairways are also fairly generous, which means players who know how to drive it big have a great advantage. And of course, there’s a ton of sand on these courses – and you’ll encounter plenty of different lies. Here, I have some tips for you on how you can improve in both these departments.

My best driving tips? I find that wanting to hit the ball hard causes people to increase their grip pressure, which means they lose power instead. Most amateurs don’t stand wide enough at set-up with a driver. Your weight shift is like a power engine in the swing, and the wider you stand, the more effective this will be. A nice, relaxed grip and wide stance helps engage the bigger muscles of your back, legs and abdomen. It’s those muscles that you can use to generate arm speed, rather than being very tight with the arms and trying to thrash at the ball.

Light and Wide
For me, the takeaway is driven by my back and chest. This gets me moving everything in-sync. Try gripping way down on the shaft of your driver with the butt of the grip resting against your stomach, and feel like you’re turning everything together.

Launch monitors have told us that the way to maximise our carry distance with a driver is to hit up on the ball. How do you do this? I think the best way is to first ensure that the ball position at address is well forward, to allow your driver room to begin its ascending path. Also, it’s very important you shift your weight onto your right side (for a right-hander) on the backswing.

If you want to go at it really hard, don’t rush it from the top or swing faster straight away. Save that extra energy for the last millisecond before you hit the ball. When you feel like the club is just coming into impact, that’s the time to step on it just that little bit harder.

Downswing Transition
My first move on the downswing is to get my left hip moving away and shift my weight onto the front part of my left foot.

When I picture the type of swing I want to make, the two words that come to mind are wide and elegant.

Adapt your shot to your lie

When you’re playing off hard sand that we see a lot of in the waste areas in the Middle East, or even in some standard bunkers, for full shots the most important adjustment to make is that you grip down on the club in order to strike the ball first.

I swing normal in a bunker, but I alter my stance and weaken the clubface.

If you’re playing a greenside shot from the hard pan, you have to change your technique a little bit. Yes, you still have to use the bounce, but I wouldn’t recommend you open the clubface too much, because you need the club to penetrate the hard sand to avoid thinning the shot. The other difference to a normal bunker shot is that you should be aiming to take a lot less sand. If your standard splash shot enters the sand around two inches behind the ball, here you’re looking to hit maybe as little as half an inch behind it. As a result you need a much shorter swing to control distance, because you have less loft on the club and there’s less sand to cushion the impact.