Turning girls on to golf If you’re around golf, you’re probably familiar with these cliché old troupes: Golf is dying. Golf is pompous. Golf is boring. Golf is only for rich white guys. At the U.S. Women’s Open a very different image of golf is on display: Golf is young, golf is growing, golf is healthy and golf is female.

It’s evident in the field. Of the 156 players competing at Trump National Bedminster, 103 players are between the ages of 20 and 29. More than 1,700 players applied to compete in this year’s championship compared with only 785 back in 1990. Walk over to the range at any point during the day and you’ll see an impressive lineup of young, athletic women dressed in bright colors, hitting balls and hitting them far.

Turn around, and the story is told even better by the fans: Young girls are fixated by the competitors. I want to see Lexi! is a common cry from little girls walking around in Puma gear. When Michelle Wie leaves the putting green, she’s followed by a stampede of junior golfers pushing flags and golf balls in front of her to be autographed. Wie takes the time to stop and sign.

Golf feels younger at this U.S. Women’s Open because it is younger. Girls under the age of 18 is the fastest-growing segment of the golf population.

One of the programs responsible for that is the LPGAUSGA Girls Golf. Through this nonprofit organization started in 1989, PGA of America and LPGA teaching pros and The First Tee certified coaches teach girls from 6 to 17 golf basics. There are more than 400 LPGAUSGA sites in the U.S.

“It’s showing some incredible results,” said Beth Major, the Director of Community Outreach at the USGA. “The environment it provides, it’s girl friendly. When girls are that young, teaching them skills in important, but they want to be with other girls their age and having fun.”

Major says they spend as much time on non-golf activities as they do with golf. “That kind of variety appeals to this group,” Major contends. “Keeping them engaged is key. There have been studies that show that [girls do best when learning in all-girl environments] and we’ve seen that as well.”

Instead of showing up to a course with a parent and being among adults (and mostly men), these girls are being introduced to golf surrounded by their female peers. The intimidation factor is eliminated, and suddenly golf becomes a lot more fun. 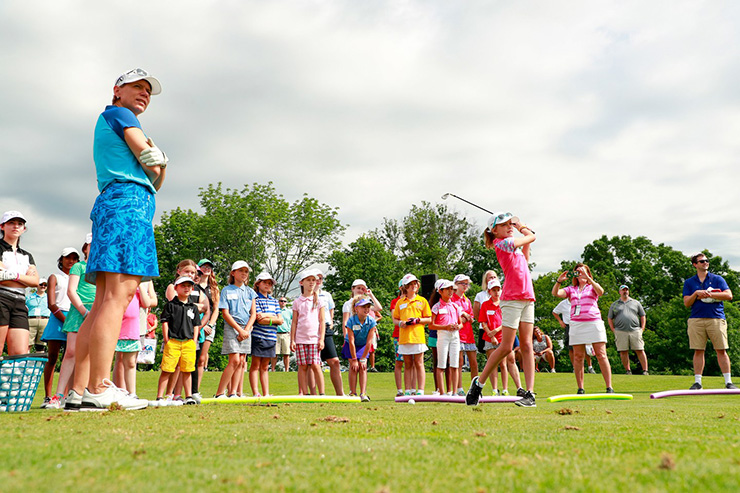 Under the watch of Annika Sorenstam, a young participant from the LPGA*USGA Girls Golf program hits balls during an outing ahead of the 2017 U.S. Women’s Open at Trump National Bedminster. (Photo by Chris Keane/USGA)

This matters for a few reasons. First, participation in the program has helped increase the total number of female junior golfers. Second, it’s produced not just new golfers, but committed ones. Several dozen players on the LPGA and Symetra Tour got their start in golf through LPGA*USGA Girls Golf. Just this week, Symetra Tour player Hyemin Kim donated the $15,000 first-place paycheck from her first career win in April to the program. According to the National Golf Foundation, in 1995, 17 percent of all junior golfers were female. Now, that number is 33 percent.

The lesson is simple: If golf is fun for girls, more girls will play golf and golf will grow.

Grabbing them at an early age is also important. According to the National Golf Foundation research on Millennial golfers, the likelihood of a player to become a golfer who plays more than eight rounds a year doubles if that person started playing golf before they turned 14. Girls who start playing golf become women who stick with golf. In turn, having more women in the game is important from a growth perspective. According a report entitled “The Global Economic Value of Increased Female Participation in Golf,” women are 38 percent more likely to introduce children to golf than men. So, by the game supporting female junior golfers now, it’s likely to see more junior male and female golfers in the next generation.

Golf isn’t old, and tired and closed off. Those types of conversations are. Golf is vibrant, young and has promise. Girls aren’t just the future of women’s golf, they’re the future of golf. Need more proof? Just follow Lexi at the U.S. Women’s Open.