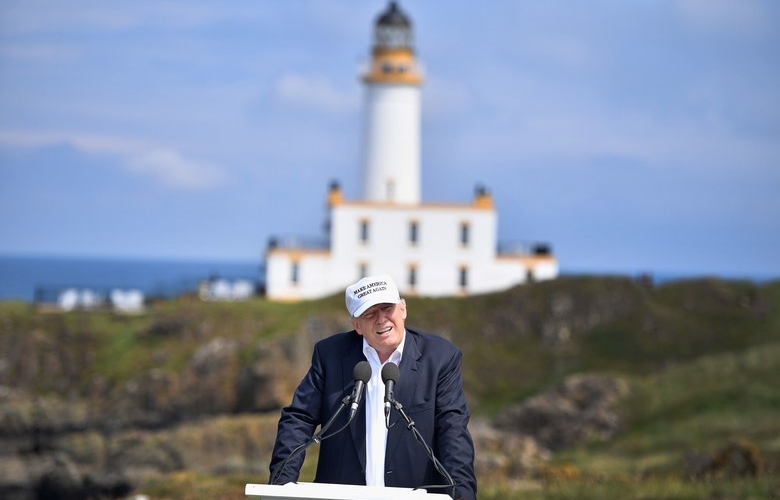 While the USGA and LPGA continue to get questions about taking this year’s U.S. Women’s Open to a Donald Trump-owned golf course, it appears the European Tour will avoid that headache. At least, for now.

Just last month, the Guardian reported that Trump Turnberry was the favourite and “in pole position” to land the 2019 Scottish Open. But on Friday at this year’s event, Martin Gilbert, chief executive of Aberdeen Asset Management, the tournament’s sponsor, essentially squashed the notion of Trump International Golf Links hosting in two years time.

“Trump, I don’t need to tell you, is a great golf course, but there are issues if we went there,” Gilbert said. “The worst thing would be if he came!”

President Trump is expected to attend the U.S. Women’s Open this weekend.

“No decision has been made,” Gilbert said, “but, look, there are clear issues, shall we say.”

Whereas the USGA and LPGA have tried to depoliticise their tournament behind held this week at Trump’s course in Bedminster, N.J., Gilbert feels it’s impossible to leave politics out of the decision to go to Turnberry.

“Politics aside, Trump would be an ideal venue, but you can’t put politics aside,” Gilbert said. “That is the issue so we will wait and see.”

The 2018 Scottish Open will be held at Gullane, and Gilbert mentioned Cruden Bay as a likely candidate for 2019.

Turnberry, which has hosted five British Opens, most recently in 2009, reopened to rave reviews in 2016 after an extensive renovation. In February, R&A chief executive Martin Slumbers said the course is still part of the Open rota, but didn’t give any indication of when the championship will return there.