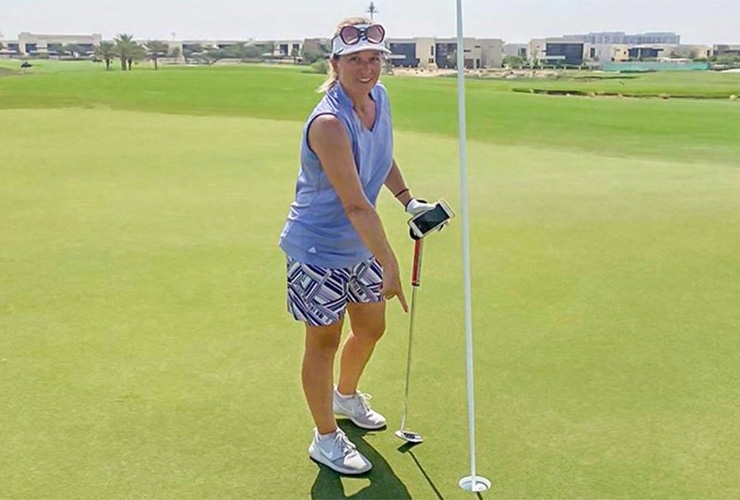 By Kent Gray
Claudine Phillips was in the midst of a fine post-lockdown round until she reached the testy – and for her all too often traumatic – 10th tee at Trump International Golf Club, Dubai earlier this week.

“Oh heck, I’d played really well up until the par-4 10th,” Phillips recalls before adding the almost inevitable the kicker. “That’s my nemesis hole. I shot a seven.”

To coin Phillip’s own reaction to the scorecard meltdown, “ouch!”

If the British expat were like the rest of us, the abrupt momentum killer would have seen her round go completely off the rails. But Phillips, lucky enough to play up to five times a week post lockdown, clearly wasn’t about to let the loss of nearly a third of her 13.9 handicap in one ‘foul swoop’ ruin her day.

Even so, what happened next is surely a contender for post COVID-19 comeback in a casual round award, if there was such a thing. After regaining her composure on the 11th, Phillips rolled onto the short par-4 12th hole with her usual playing partners Gillian and Kim offering some not so subliminal encouragement.

“As I stood on the tee, Kim said it was time for a hole in one.”

Yup, you guessed what happened next. But this was no ordinary ace.

“I hit a lovely shot with a slight draw. We saw it hit the green and roll towards the flag but we couldn’t see it go in, we just knew that it was going to be close,” Phillips said of her perfect shot on Monday.

“Kim got to the hole before I did and started shouting that the ball was in the hole!”

While holes in one aren’t that uncommon – Phillips incredibly recorded one on the 15th at Trump in March – an albatross/ace is exceptionally rare. Phillips was so dazed in the glorious moment she event took her putter to the green out of habit.

Congratulations to our member, Claudine Kingston from the team at Trump International Golf Club, Dubai, for an extremely rare achievement!
A fantastic hole in one! Albatross on the PAR 4, 12th hole.#trumpgolfdubai #holeinone #achievement #proudmoment pic.twitter.com/BDSVCSy7FN

“We all screamed. I don’t think it really sank in at that stage just what an achievement it was. I immediately messaged my director of golf [Trump Dubai’s Phil Waine] to tell him. I think his words were ‘a very rare big bird’.”

For the record, Phillips used a 4-hybrid on the 174-yard par-4 which can play tougher than its length suggests courtesy of a skinny, sharply elevated green.  She went on to shoot 84 – not too shabby considering that pesky seven.

“It’s not my best round, I’ve shot 75 before, but I was really happy, it was such a lovely day,” Phillips said.

“I’m so lucky to be a member at Trump, seriously, the course is in superb condition, it always is. And the staff are just lovely. They have all made sure to individually congratulate me on my albatross. I feel like a celeb!”

Enjoy the status, Claudine. And good luck on the 10th next time. That hole clearly owes you.