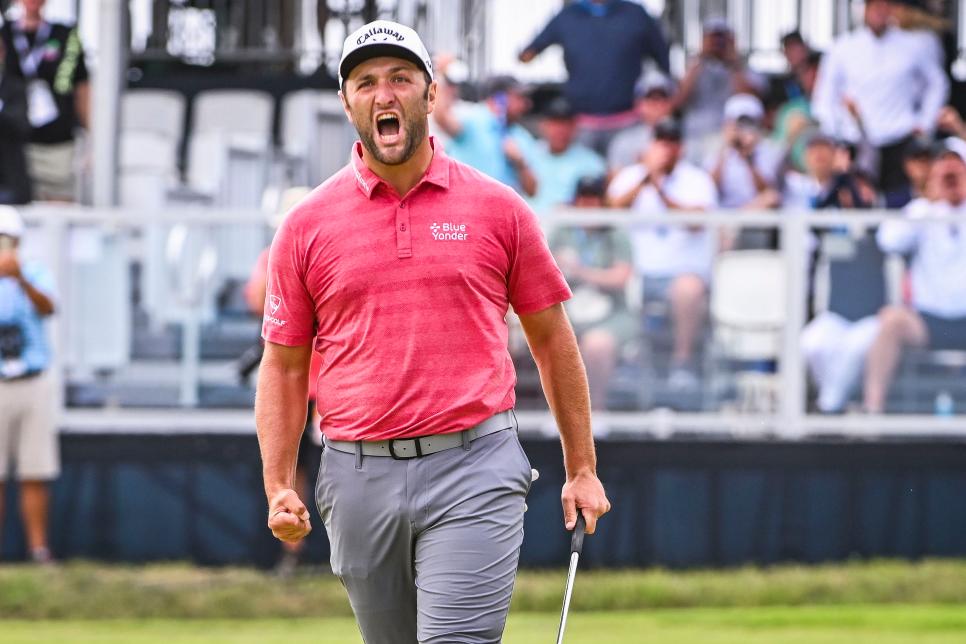 Keyur Khamar
Jon Rahm celebrates after making a birdie putt on the 18th hole green during the final round of the 121st U.S. Open.

By Tod Leonard
SAN DIEGO—The ceremony to present Tiger Woods with the 2008 U.S. Open trophy was barely over when San Diego city officials put the press on the USGA’s honchos. Torrey Pines and the game’s biggest superstar delivered one of the greatest shows in the history of all majors, and the folks who hosted the party already had the next invitations engraved.

The people from Far Hills, N.J., in the blue coats politely nodded and smiled—and then very much went silent for a couple of years. Feeling a bit put off, a San Diego golf championship committee filled with local businesspeople sent a letter to the PGA of America inquiring about hosting a future PGA Championship or Ryder Cup.

That did the trick. The USGA came quickly courting and awarded the ’21 U.S. Open to San Diego.

Now what does the USGA do after a second week of tremendous theatre? This wasn’t Woods, on a broken leg, making birdie on the 72nd hole to force a playoff he’d win over everyman Rocco Mediate, but it comes about as close as any Side B could. In an embarrassment of storylines, World No. 3 Jon Rahm emerges on the back nine from a pack of show ponies with birdies on the last two holes to shoot four-under 67 and beats Louis Oosthuizen by one shot … two weeks after Rahm tested positive for COVID-19 while dominating the Memorial … on Father’s Day with his wife and 2-month-old son looking on … at one of his favorite courses and places in the world.

We had a back-nine battle and bloodbath that make any major memorable. Rory McIlroy made a double-bogey at the 12th, as did Paul Casey. Collin Morikawa doubled 13. Oosthuizen bogeyed 17 by watching his ball roll over hardpan into the canyon. And then there was the monumental collapse of Bryson DeChambeau and his inward 44.

Hello? What more do you want?

“Another home run,” Rees Jones, the Torrey Pines South architect, said on the phone on Sunday night while having dinner with his wife at The Lodge at Torrey Pines. Jones, 79, walked the course all day and saw a number of the key shots in person.

“The [soon-to-be] No. 1 player in the world won,” he said. “That’s really what you’re trying to do, have the cream rise to the top, and it certainly did. You still had good scores like 67, but by the same token you really had to keep your concentration.”

The Torrey Pines South Course doesn’t get much love from some aficionados. It ranks in the second 100 of Golf Digest’s America 100 Greatest Courses—barely making that tier at No. 198. Despite being the anchor course for a PGA Tour event every year, it gets raked for being too straight, too predictable, and maybe too public in its birthright as a municipal layout. Maybe parasailers cruising by don’t make it “legit” enough. Who knows?

And yet, piggybacking on Jones’ analogy, it’s like the .180 hitter delivering the ninth-inning homer in the seventh game of the World Series.

Torrey proved once again that between the USGA’s setup and just the plain old nature of the course, that great things can happen here. First, just look at the pedigree of who has won the Farmers Insurance Open in February: Rahm, Patrick Reed, Justin Rose, Jason Day, Bubba Watson, and Woods on seven occasions.

All major champs, and there’s a reason for that. The South plays tough in the winter, but the USGA can basically do anything it wants to it come June. This time around, the fairways weren’t overly narrow and the rough was up, but either by design or growing circumstances this spring, the deep stuff was spotty and not overly brutal. The yardage was manageable and the greens were, by all appearances, still alive on Sunday night—a positive step compared to some U.S. Opens.

“The rough was substantial,” Jones said. “This was the old U.S. Open setup that I think they’re going to be using moving forward.”

Probably most telling, there was almost no complaining, at least in public, of how the course played.

“Yeah, I love this golf course,” two-time U.S. Open and four-time major champ Brooks Koepka said after finishing four strokes out of first. “It’s fun to play. I think it’s perfect for a major championship. The way it sets up, you’ve got to be able to put the ball in the fairway, control your irons, and you’ve really got to putt well out here. That’s kind of the basis of a major championship. You need to be able to do everything really well. I think this course is perfect for that.” 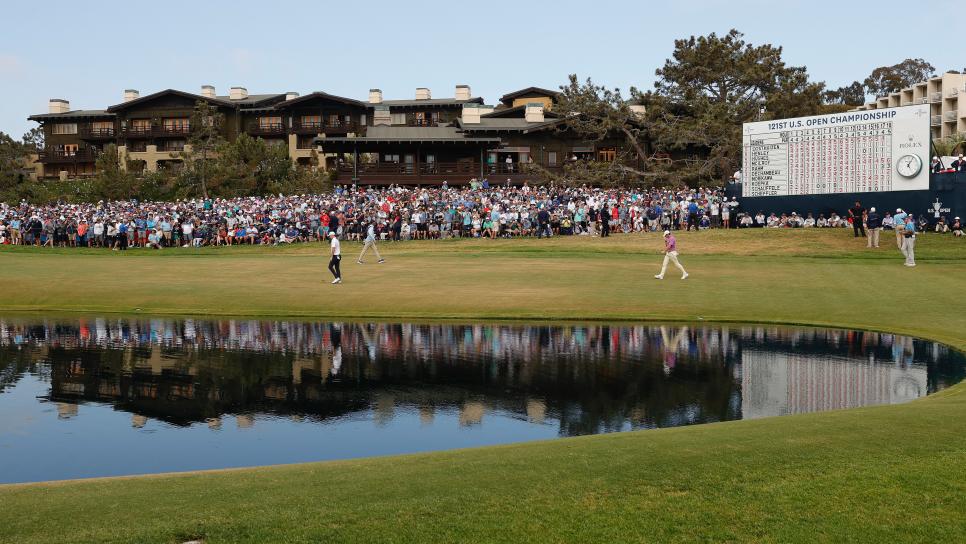 Ezra Shaw
Russell Henley and Rory McIlroy walk up the 18th hole during the final round of the 2021 U.S. Open at Torrey Pines.

The U.S. Open is supposed to be the most democratic of tests, and if it’s not always that, it certainly is at Torrey. Remember that a 45-year-old Mediate, with a history of back problems, took Woods to the brink. Going into Sunday, two short hitters, Mackenzie Hughes and Russell Henley, were tied for the lead with a 38-year-old mid-range guy, Oosthuizen.

In the end, it was a big hitter in Rahm who won, and two shots behind Oosthuizen in solo third was Harris English, a well-regarded ball-striker who ranks 80th on the PGA Tour in driving distance.

“You have guys who are long hitters, guys who are short hitters, a lot of different strategies, and it comes down to execution,” Phil Mickelson said. “It hasn’t limited everybody—like everybody’s had a chance if they play well. I just think they did a great job. I’m really impressed.”

Somebody get some smelling salts for Mike Davis. The outgoing USGA CEO and Mickelson have not always seen eye-to-eye. (Remember Lefty chewing him out late on Sunday at Merion in 2013?) But Mickelson, who was possibly doing a bit of local promotion, said the setup was the best he’d seen in 30 years. After shooting 75 on Sunday to finish at 11 over, Mickelson praised the fourth-round setup by the USGA’s John Bodenhamer because it kept some of the easier holes scoreable while accentuating the challenges on the toughest holes.

Lefty knew what he was talking about.

English had an interesting shoutout after he closed with a 68: “I think what Jason Gore has done to this tournament has been awesome. It’s a tough test, but it’s very fair out there.”

Gore is the former tour player who has become a USGA liaison to the players. Apparently, whatever message he’s passing on is being heard.

Will the golfers’ love of Torrey Pines and the drama produced here be heeded? It’s hard to tell. There’s been speculation of late that the USGA will emphasize a tight core of its traditional venues—”cathedrals of the game,” Bodenhamer said this week—with maybe only a few “others” sprinkled in. Bodenhamer says he “loves” Torrey Pines and all that it represents.

The next open date for this championship is in 2028—far too soon to even consider a return to Torrey, but maybe something in the ‘30s? Or if the USGA takes a pass, maybe the PGA of America gets interested again.

“After what we saw this week I would thnk Torrey Pines would be part of the rotation,” Jones said, “because it’s so well-accepted by the players. The players really love it. What you get is what you deserve.”

Maybe that should be Torrey Pines’ new slogan.