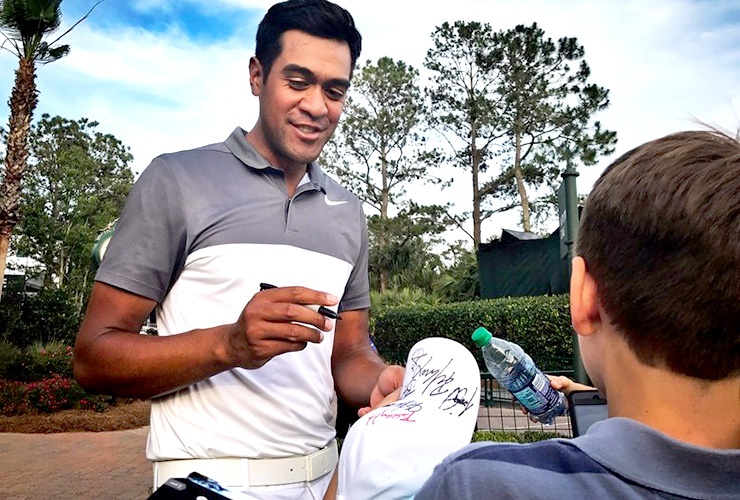 PONTE VEDRA BEACH, FL – MAY 12: (EDITORS NOTE: Image was created with an iPhone and processed using digital filters) Tony Finau signs autographs during the second round of THE PLAYERS Championship on THE PLAYERS Stadium Course at TPC Sawgrass on May 12, 2017 in Ponte Vedra Beach, Florida. (Photo by Brad Mangin/PGA TOUR)

On Wednesday the R&A announced that 2003 Champion Golfer of the Year Ben Curtis has withdrawn from the 2017 Open Championship, and will be replaced by Tony Finau.

Finau, 26, is one of the more exciting players on tour thanks to his power off the tee (eighth in distance at 308.3 yards) and aggressive play (first in total birdies). He’s enjoying his best season in his fledgling career with five top 10s, almost $2 million in earnings and ranking 26th in the FedEx Cup standings. He posted a commendable showing in his Open debut last season, finishing T-18 at Royal Troon.

I don't know the circumstances behind Bens Withdrawal but I'm grateful to be playing in another @TheOpen 😁 https://t.co/aPson0JOYy

Curtis, who won as a 300-1 underdog at Royal St. George’s in 2003, has made the Open cut just once in his last eight tries. The 40-year-old has played only twice on tour this season. He pulled out of the Texas Open, citing a shoulder issue at the time.

The Open begins at Royal Birkdale next Thursday, July 20.