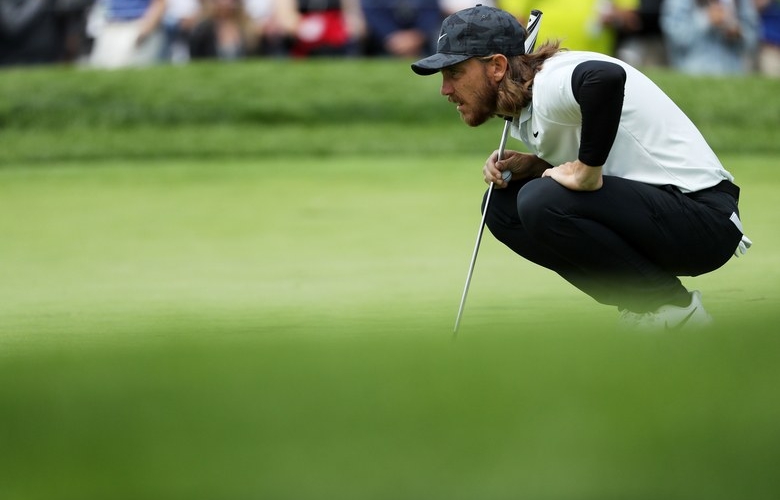 Patrick Smith
Tommy Fleetwood lines up a putt on the ninth green during the first round of the 2019 PGA Championship.

By John Huggan
FARMINGDALE, N.Y. — There are a dozen Englishmen competing in this PGA Championship at Bethpage Black—the most of any nation other than the United States. All but one of the 12 is ranked among the world’s top 100 players. But, as the crowds at last year’s Ryder Cup matches were quick to announce on multiple occasions, “There’s only one Tommy Fleetwood.”

Back on Long Island 11 months on from his runner-up finish and closing 63 at Shinnecock Hills in the U.S. Open, the hirsute 28-year-old underlined his major-championship credentials with a morning 67 that was bettered only by the relentless figure of Brooks Koepka. Six birdies dotted Fleetwood’s card, one that was marred by three dropped shots on a day when he found nine of 14 fairways from the tee and 13 greens in regulation. In other words, the 16th-ranked player in the world followed the prescribed formula for success on the fearsome 7,406-yard A.W. Tillinghast layout: find short grass off the tee on a consistent basis and you have a chance to make a decent number.

As ever though, it was a score that could have been better. While it would be an exaggeration to say Fleetwood, a mild-mannered soul, was raging after signing his card, there were little signs of irritation in his amiable demeanor. Behind his invariably smiling countenance—and all that facial hair—lurks a dogged competitor, for all that his initial verdict on the day was generally positive.

“The course was a little more forgiving than the practice days have been,” he said. “It felt like there were a few chances today. But overall it is still a brutal golf course. As soon as you’re out of position, you’re going to struggle. Luckily enough, I hit plenty of good golf shots. And I felt like I holed out really well. I holed all the putts that you want to hole—the ‘momentum’ putts.”

Fleetwood was right to look on the bright side of life. Anyone making birdie on one-third of the holes on a course that has provoked all kinds of adjectives this week—all of them found in a thesaurus under “brutal”—had to be happy enough with his ability to put red digits on the scoreboard.

“I made a great birdie on 15 [he started on the back nine], which was my first one of the day,” he said. “But at no point did it feel like the course was going to lend me anything. So yeah, six birdies is a lot. It’s probably more than I thought I would get.”

To the surprise of no one who has been paying attention to the rise and rise of English golf over the last few years, Fleetwood was not the only one among his countrymen to finish under par. Clearly recovered from letting victory slip from his grasp at last week’s British Masters—and being the victim of the European Tour’s latest practice joke on social media—the highly promising Matt Wallace got himself round in 69. A four-time winner on his home circuit, the 29-year-old was four under par through seven holes but could only make one more birdie while also carding four bogeys.

“It would have been nice to get a couple at the end, after giving myself chances at 16 and 18, but overall very happy,” Wallace said. “I had that little stretch in the middle there where I missed fairways, missed greens and was going to make bogeys.”

Expect others to follow, too. In 2018, as many as 27 Englishman finished inside the all-exempt top-110 on the European Tour’s money-list, the Race to Dubai.

“There is definitely strength in numbers,” says Denis Pugh, who coached Francesco Molinari to victory in last year’s Open Championship. “These are guys who maybe haven’t grown up together but have driven each other on.

“It started with the likes of Lee Westwood and Paul Casey. Justin Rose and Ian Poulter carried it on. And now, when they are the senior members of the group, we have the next generation coming through. Eddie Pepperell, Matt Fitzpatrick, Tommy, Matt and Jordan Smith are all impressive ball-strikers. And they all play with the belief that, if their peers can do something, so can they.”

This week all have the opportunity to not only do something, but something special. It is exactly 100 years since the first and so far only Englishman, “Long” Jim Barnes won his second PGA title.