Tom Rourke is the new man with a familiar face behind GM’s desk at The Els Club, Dubai 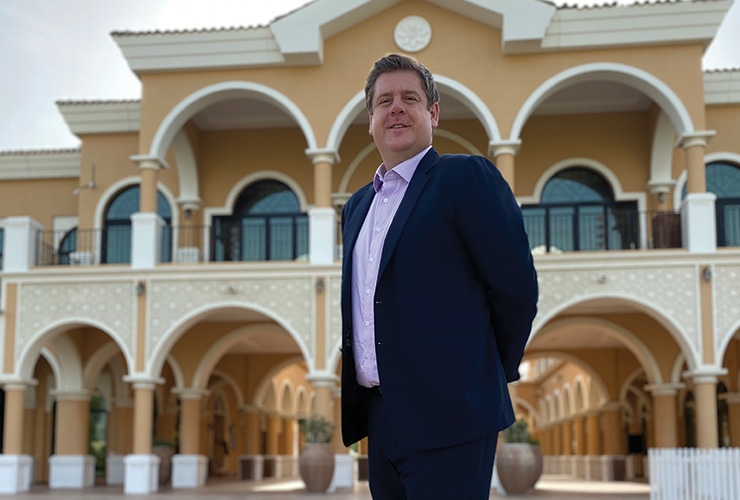 Get to know the new man behind the General Manager’s desk at The Els Club, Dubai

By Kent Gray
Succeeding Karl Whitehead at the helm of The Els Club, Dubai is equal parts exciting and daunting. Now in charge of a Faldo-designed 36-holer in Cambodia as part of Troon Golf’s global management merry-go-round, The Els has not only lost one of Middle East golf’s nice guys in Whitehead, it has also bade farewell to a highly capable leader. Indeed, Whitehead helped charter the club through some of UAE’s golf’s most challenging fiscal periods, all the while ensuring it retained a reputation as one of the best conditioned courses in the region.

Big shoes to fill then. Step forward Thomas Rourke. After the best part of eight years at The Track, Meydan Golf, the 39-year-old Englishman has well and truly earned his spurs as a profitable businessman and leader of good golfing men and women. During his reign, The Track was voted the globe’s best 9-hole course for three successive years in the World Golf Awards and once scaled the heights as Dubai’s second highest ranked course on Tripadvisor. That led to Rourke being named the Middle East’s leading Director of Golf in 2017 and made his promotion to a facility the pedigree of The Els merely a matter of time.

“I’m delighted to succeed Karl who has done a fantastic job at The Els Club,” said Rourke. “I am very excited to be taking this step to continue my career with Troon Golf and to join a very talented team and prestigious facility.
“The club is already in an incredibly strong position with its unique and first-class offerings. The opening of the new leisure club, on track for September, is the priority and we have plans to refresh and update other parts of the facility moving forward.”
After starting his career as an assistant pro at The Abbey Hotel and Belfry Resort, Rourke has made the Middle East his home. Before The Track, he served as Director of Golf at Yas Links Abu Dhabi between 2010-2012 and before that worked as Golf Operations Manager at both Saffa Golf Club in Saudi Arabia and the Nad Al Sheba Golf Club. We caught up with the avid Newcastle United fan in his first week in the new role at Ernie Els’ renowned Dubai creation.

● ● ●
No one in my family plays or has any interest in golf. My parents moved onto an estate which was on a golf course and I decided to give it a try at the age of 13. I became totally obsessed after having some junior lessons and my teenage years were spent playing golf from sunrise until sunset nearly every day.
● ● ●
I had a mixed set of clubs with every club a different brand bought from markets including a wooden-headed driver. I just fell in love with the sport. My first handicap was 14 at the age of 14.
● ● ●
I think as a junior golfer we all have an ambition to be on TV and to play in a major. I would always enter The Open qualifying event each year but quickly found out how incredibly high the standard was and that level par was nowhere near good enough. The standard is on another level and it really came down to the fact that the best always holed more putts.
● ● ● 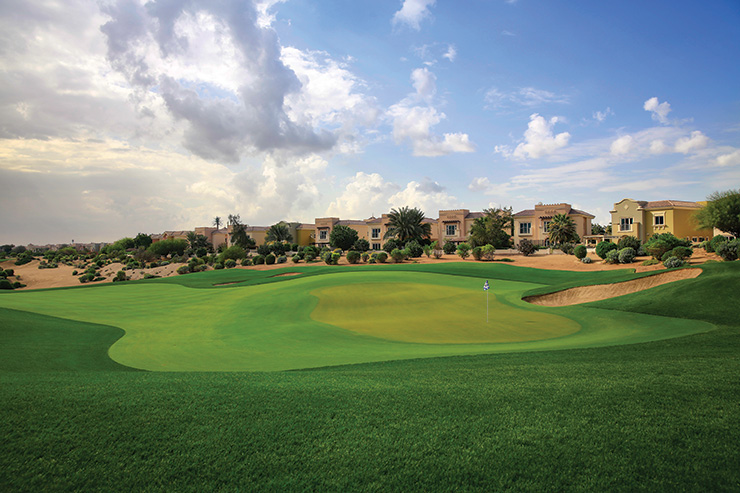 The Els Club consistently presents as one of the best conditioned courses in the Middle East. (Kevin Murray)

The new leisure club will be a great addition to the already world-class offering at the Els Club. With Troon Golf heavily involved with all of the planning and design under the “Troon Fit” brand the facility will be something very special. This is like no other leisure facility at any other golf course in this region with a real focus on classes, personal training and fitness with a state of the art facility and many unique offerings.
● ● ●
Do the basics well. Turn up, be on time, be humble, be organised and be positive. That’s the best advice I’ve received in a professional capacity. I am incredibly fortunate to be working in the golf industry doing a job I love, working for the best golf management company in the world – Troon Golf – and in a part of the world where the sun is shining.
● ● ●
Having come from a background of high-end membership based facilities, managing the Track, Meydan golf was a very different challenge and one which I enjoyed every day. Wow, it taught me a lot. If we did not deliver the best course conditions and experience that we could then golfers had no loyalty or investment to return. This was set out as our foundation, to make daily fee golfers feel like a member for the day and value choosing to play the facility. My financial acumen improved dramatically knowing that the facility was there to make profit and be self-sufficient. The facility achieved this every year I was in charge and allowed us to further invest into the property to improve course conditions and the offering.
● ● ● 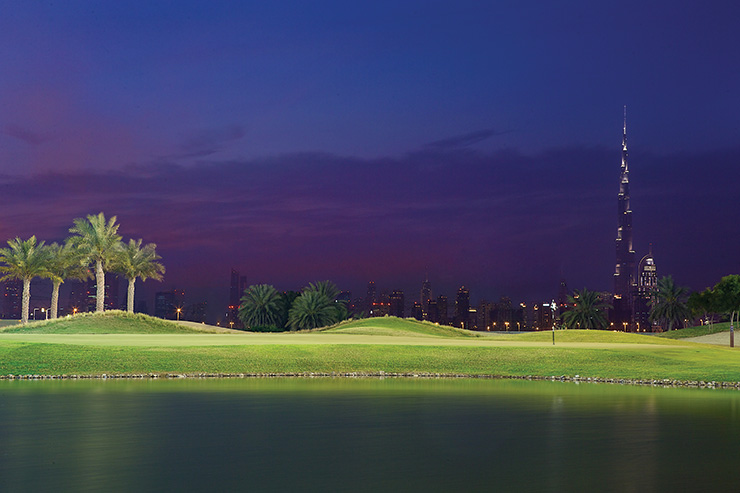 Having a pay-to-play facility like The Track is exactly what Dubai needs to introduce golfers to the game and to have an offering for golfers who do not want to invest or commit into joining a golf club.
● ● ●
We all feel very privileged to be working in the golf industry during the COVID era as business is booming and we are seeing one of the busiest and most successful periods, something not seen in golf for a very long time. People are returning to the sport or are taking it up for the first time given its natural safety measures complying with social distancing.
● ● ●
Membership of a golf club is still something very special. The relationships built on a golf course are unique and something that other sports and memberships cannot offer. We offer a wide range of membership options to appeal to all and with the leisure club opening soon the facility will become even more accessible.
● ● ●
The highest standards, working around serious talent, career opportunities and progression. That what makes working within the Troon network so rewarding. This really is as good as it gets, you always have someone within the Troon family that you can turn to who has already overcome the same challenge who can offer you a solution.
● ● ●

I remember having a Tiger Woods swing sequence torn out of a Golf Digest magazine in my golf bag and trying to replicate the swing movements from the age of about 14-15.

Tiger Woods, Bobby Jones and Spencer Edwards would make up my dream fourball. Tiger is my biggest inspiration and got me into golf. Jones was an incredible talent and the greatest golfer to have ever lived. Spencer was the club professional at my first full-time job in golf and my coach who was able to drastically improve my ability and handicap. Spencer himself was a great golfer who had played on the European Tour so as a thank you to him, we’d play with Tiger and Bobby Jones who we both admire greatly.
● ● ●
From his first Masters win I was obsessed with how far Tiger could hit the ball and how he was making golf into an athletic sport. I remember having a Tiger Woods swing sequence torn out of a Golf Digest magazine in my golf bag and trying to replicate the swing movements from the age of about 14-15.
● ● ●
The green jacket or claret jug? the green jacket for me. I have great memories of trying to stay awake to watch the Masters as a kid, admiring the course condition, history and the drama.
● ● ●
Loch Lomond was probably the best course I’ve played but I played terrible that day and want to forget that round. So I would say the Blue Monster Doral as it was an incredible experience. My bucket list courses are Augusta National and Pebble Beach.
● ● ●
I’m from Birmingham but a Newcastle United fan. My father is from Newcastle and my biggest passion is Premier League football and watching Newcastle United.
● ● ●
Time is the biggest challenge facing club golf today. Everyone seems to have so much going on and so little time. Many of the things we are spending time on have no value and no actual direct social engagement with anyone of any importance to us. With golf taking four hours-ish for 18 holes and with the time it takes to learn how to play, it puts us at a disadvantage to many other sports which are far less time consuming and far easier to learn. The other point would be that there are just too many golf courses and operating costs are not reducing.