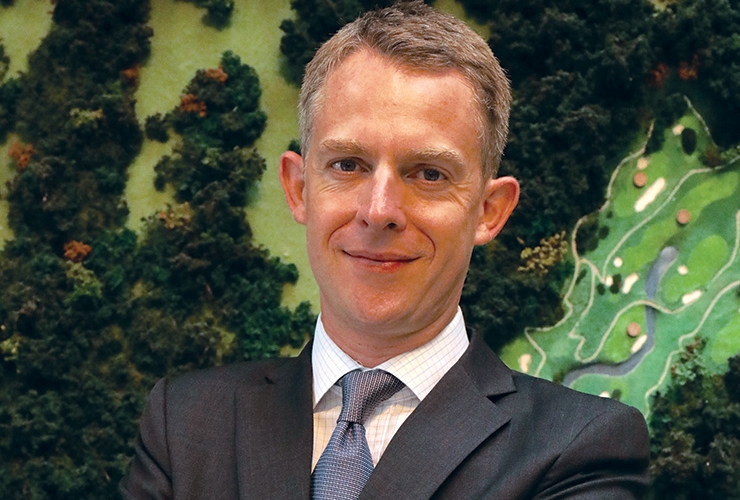 By Kent Gray
He’s worked for Sir Nick Faldo, helmed the Hong Kong Golf Association and has consulted to Mission Hills in China – the world’s largest golf facility with 22 courses – for the past three years. It’s no surprise then that Tom Phillips owns some pretty amazing golf memories.

A bit like F1, Phillips career progression has been rapid too. The 45-year-old Englishman started as the chief of the European Tour’s Middle East division on July 1, succeeding long-serving Nick Tarratt. He brings wife Tania as well as 25 years’ experience in the golf and leisure industries, the last 14 years in Asia, to Dubai and his new role.

With a BA Honours degree in media and communications and 15 years working for England’s first golfing knight as the CEO of the Faldo Series, Phillips can’t wait to get started in his dream role.

“What is my proudest single career achievement to date? Being appointed Head of Middle East for the European Tour,” Phillips says. “I’ve worked closely with the tour for more than 20 years through my different roles in golf, so to join the team and take on this position in such an important region for the sport is a privilege.”

What did you learn from your time as CEO of the Faldo Series that will be useful in your new role?
That you need to commit time and effort to any project for it to succeed. It’s a testament to Sir Nick that the time and effort he commits to the programme has launched so many successful careers over the years. Some people were sceptical when the series was first launched but all these years later he’s still devoted to the cause, taking so many players under his wing and helping them make it to a high level.

What’s the best piece of advice Sir Nick Faldo gave you?
Always keep pushing the barriers. Nick is the same in business as he was as a player: never sit back and think the job is done. What can we do next? Where is the next opportunity?  What can we do to get even better? Then keep working harder than anyone else to get there.

European Tour boss Keith Pelley says the tour is a content creator first and foremost. you have an honours degree in media and communications. we see a pattern here. will we see a significant change in the promotion/delivery of the European Tour’s Middle East product?
Key pillars for the European Tour are inclusivity and innovation and that’s something for all of us to be very proud of and excited about. We had the Jordan Mixed Open in Aqaba earlier this year which, from my point of view as a golf fan from the outside looking in, seemed to be a huge success. We’ve also had the Belgian Knockout and the GolfSixes and so it’s a really exciting time for golf in that perspective, exploring different avenues and formats and breaking down some barriers. 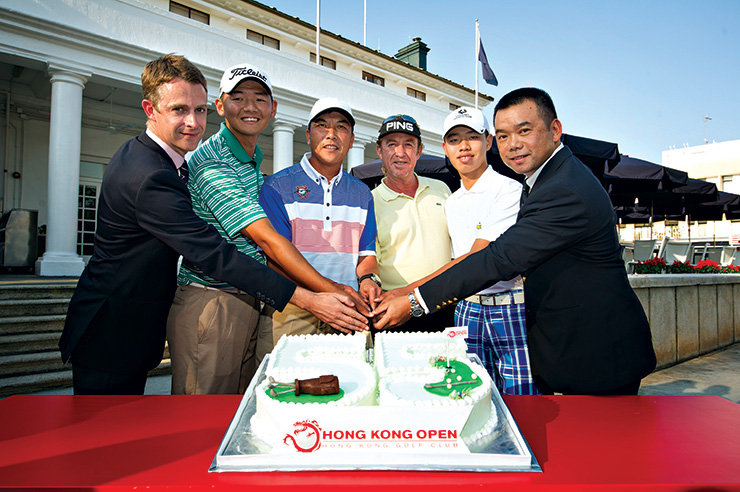 Phillips, left, at the 55th Anniversary edition of the Hong Kong Open in 2013

You’ve spent 14 years in Asia, a market similar to the Middle East. What has your time there, including at the Hong Kong Golf Association, taught you?
I think, even from my time in the 1990s working with a PR agency in the UK and on through my time in Asia, I have learned to adapt to the changes in the way the industry works and go with it. Take social media for instance and its incredible growth over the past 10 years or so. Social media has created so many opportunities and it’s really exciting to see how it has added to the whole PR scope. It moves at quite a pace. In China the growth of WeChat, for instance, is astronomical. It’s a huge part of life in the business community, way ahead of anything in Europe and other parts of the world. The Hong Kong Golf Association was another hugely valuable experience, working with golfers at all levels – from the world’s top players in the Hong Kong Open to local children experiencing the game for the first time through our new HSBC Golf For Schools programme.  We also had to take the governing body in a more commercial direction and we managed to achieve that with some key partners, HSBC is one of them.

Unless you’ve played there, it’s hard to get a grasp on how big/impressive mission hills is. this must have been a fascinating chapter in your career?
It really was. I have enjoyed a friendship with the Mission Hills owners for 15 years and for the last three years I consulted for them as Director of Business Development. As the world’s largest golf facility with 22 courses, they have been pioneers for golf in the country.

We see you’ve been working on Mission Hills International ‘golf and more’ strategy including recently-announced partnerships with FC Barcelona, the NBA and the PGA of America. what can golf learn from these sports/potential collaborations?
For me, that has been a really interesting experience to work with these huge organisations outside of golf. These are brands which are among the biggest in their class, which are also hugely committed to China. If you look at the European Tour and their investment into the Middle East over the last 30 or so years you can probably draw some comparisons.

What are your expectations of moving to Dubai?
I’ve been coming to the UAE and the Middle East since 2006. We teamed up with the EGA to set up a Faldo Series event in Dubai in 2006 which we combined with the opening ceremony for Nick’s re-design of the floodlit Wadi [now Faldo] Course at Emirates Golf Club. We also established the Faldo Series at Al Ain Golf and Shooting Club in the UAE – now the venue for the European Grand Final – and a few years of events in Bahrain. So, I’m quite familiar with the region. My family and I are excited to move to Dubai and get to know it even more; we have a son, [16-year-old] Sandy, who is at boarding school in the UK and looking forward to his holidays in Dubai! Aside from the job opportunity, I realise that it’s a great place to live, with its infrastructure, climate, safety, entertainment and, of course, golf.

What do you hope to achieve in your first 100 days in the role?
My first objective is to listen and learn from the existing Dubai office team and also spend time with key stakeholders, including venues, sponsors and governing bodies. I would like to think that my own international experience can help continue the excellent progress that has been made over the 30 years that the European Tour has been in the region. 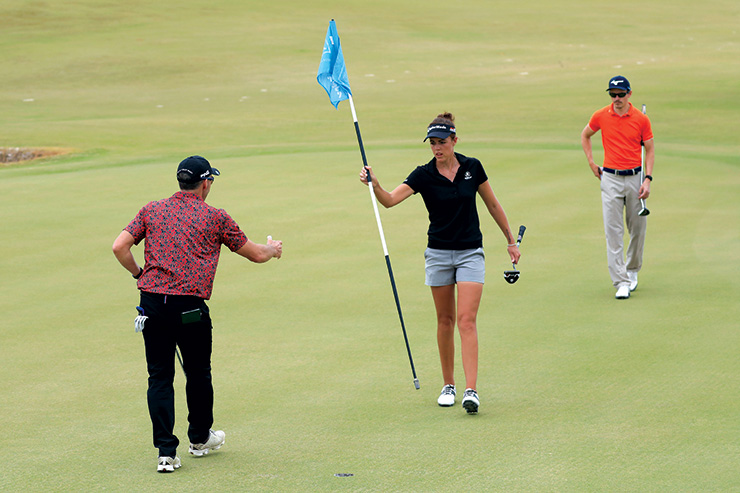 Phillips: “As a golf fan from the outside looking in, the Jordan Mixed Open seemed to be a huge success.”

With six main tour events, the new Jordan Mixed Open and potentially the challenge tour season-decider again, the Middle East is a vital part of the European Tour’s global offering. How will you take it forward?
By listening to our key stakeholders in the region and understanding what they want. Knowing how invested the Tour is in the region, with initiatives like the biggest first prize [US$3 million] in golf for the winner of the DP World Tour Championship, Dubai, it’s a key area for global golf and for me that’s part of the attraction, the opportunity to expand and move forward. 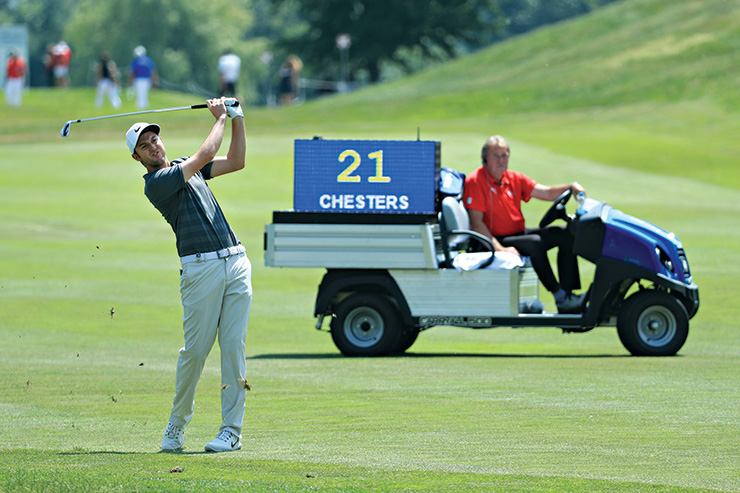 Is growth, in terms of more events in the region, part of your remit?
I believe that there is definitely room for further expansion for the European Tour in the Middle East, both in terms of new events but also, perhaps more importantly as we’ve seen recently, new formats of the game.

Who is Tom Phillips when the tie comes off at the end of the day?
Pretty normal really…I think! I really enjoy travelling – meeting new people, visiting new places and experiencing new cultures – and I also love following sport.  But I get to do both of these hobbies in my day job so there is no real reason to be different outside of work.

What’s one thing that people may not know about you?
I’m a lifelong fan of AFC Wimbledon, formerly Wimbledon Football Club. I don’t normally admit that but, there, I’ve said it.