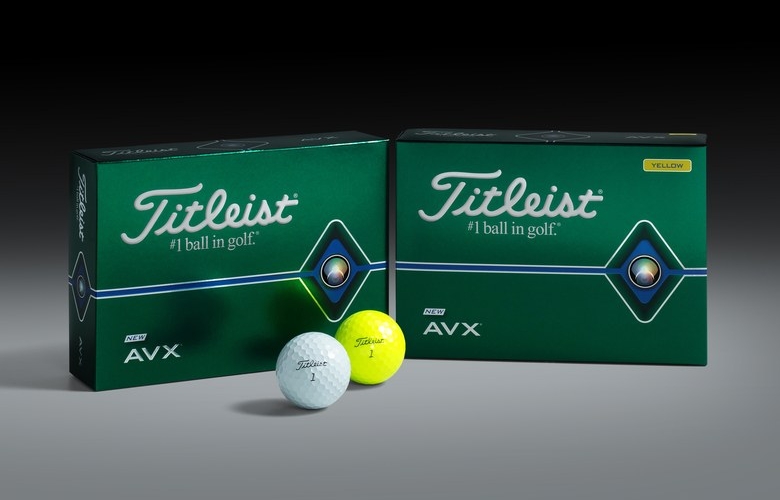 By Mike Stachura
While the new Titleist AVX maintains its presence as the softer-feeling, lower-spinning multilayer urethane cover ball in the company’s lineup, it also provides an education that making a softer-feeling ball that still flies far and yet also spins like the best tour balls around the greens requires more than a magical collection of rubber compounds in the core.

“It’s definitely the case that there’s more soft elements in the ball because we’ve made the core larger,” said Titleist’s Michael Mahoney. “But you want to bring speed to that softer feel, and that comes from the relationship between the casing layer and the core.”

That combination in AVX works to continue the ball’s performance metrics as Titleist’s softest feeling, lowest spinning and lowest launching premium ball in the family led by the perennial top-selling Pro V1 and Pro V1x. Introduced as a limited regional release in late 2017, the ball became fully available in the spring of 2018 after that early successful start. Now comes its second iteration as a fully-fledged globally launched product. It’s an audience that’s been clear from the very beginning, Mahoney said.

“AVX players tend to have as high a loyalty as any player in the Titleist golf ball family,” he said. “It told us that the performance hole we were representing with AVX represented a real opportunity. The goal was to improve those areas of iron and driver distance and increase short game spin maybe even get a little bit softer feel while maintaining its identity with respect to Pro V1 and Pro V1x as the alternative that spins less, flies lower and feels softer.”

Those characteristics most notably included a sense among AVX players that the ball produced longer distance with their irons. But those players also were asking for more short game spin to go with that distance.

Those requests brought subtle but comprehensive alterations for the new AVX that are designed to keep it the same while improving it at the same time. That includes a larger low-compression core that will produce a softer feel. But the distance quotient for AVX gets a boost with a new casing layer or mantle around that core designed for faster ball speed and low spin on longer shots for more potential distance. Finally, the increased short game spin starts with a thinner thermoset cast urethane cover, working in concert with those other ingredients. The new aerodynamics on the dimple pattern is aimed at optimizing a more piercing trajectory.

“We took a similar tack we took with Pro V1 and Pro V1x in 2019 and made a thinner cover,” Mahoney said. “That uses less of the soft material in the ball which allows you to add speed. Different than Pro V1 and Pro V1x, we allowed the casing layer to get thinner, as well, which allowed us to increase the size of the core, which also added speed.”

The reformulated core on the AVX has grown from 1.51 inches in diameter to 1.55 inches.

“Having more of that soft compression core material generates a softer-feeling golf ball. Even though the compression hasn’t changed, it’s just that ratio of what materials are included in the ball that are delivering that performance. And that improved short game spin is because of that relationship between the cover and the casing layer.”

The new Titleist AVX will be available at retail Jan. 22 in both white and optic yellow.