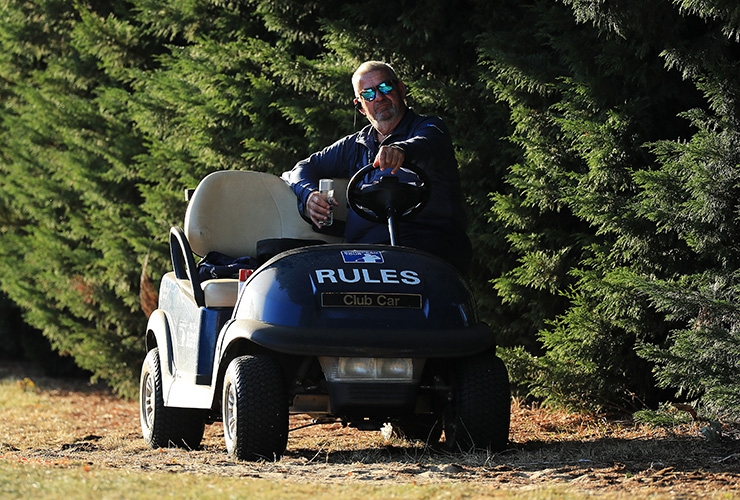 By John Tully-Jackson
The European Tour has doubled down on its blueprint to combat slow play with a revision set to put the worst slowpokes under the microscope as early as this week’s HSBC Abu Dhabi Championship.

Changes to the four-point plan initially published in August to increase the powers of referees to crack down on players who have multiple ‘bad times’ over the course of a tournament were unveiled at the Rolex Series event on Tuesday.

Players will now be docked a penalty stroke for two slow-play violations over the duration of a tournament whereas the initial guideline was for two violations in any one round.

The Rolex series event is the first time this new power will be given to assist referees in their ongoing effort to battle slow play.

While referees do have a discretionary leeway of an extra 10 percent of time if they feel a player takes longer to get into position to hit a shot, a ‘bad time’ will be assessed should that player err into the extra 10 percent a third time.

Players will have the ability to ask for a time extension once per round, adding 40 seconds to the allotted time for that shot. This can only be requested once and must be made clear to the referee before the exceed their time limit.

Also being trialled this week is the ‘Pace of Play’ timing system. It uses the latest technology to track groups and ensure everyone is where they should be on the course.

Along with reducing the minimum number of field sizes across events and increasing the gaps at the weekend so that groups flow better, the European Tour is moving in the right direction, spearheaded by European Tour Chief Referee John Paramor.

“The tougher measures which come into effect in Abu Dhabi empower our referees to more effectively target slower players. Changing the regulation for an immediate one-shot penalty to now be triggered by two bad times in a tournament instead of a round will force slower players to consistently ensure they play within timing regulations,” he said.

“This is part of our wider, robust policy to tackle slow play but our fundamental advice to all players remains consistent – they should be ready to play when it is their turn.”

Under his guidance, the referees at Abu Dhabi Golf Club have been given a brief to focus on players who are seen to be regularly taking too much time, regardless of them being ‘in position’ on the course. If there is a breach of the prescribed time limits in this situation, they will incur a ‘monitoring penalty’, which doesn’t count toward the one-stroke penalty in that tournament.

However, should the player commit multiple transgressions of either ‘monitoring penalties’ or ‘bad times’ they will face ever-increasing fines starting from €3500. The fines for the number of times repeat offenders have been put on the clock have also been increased.