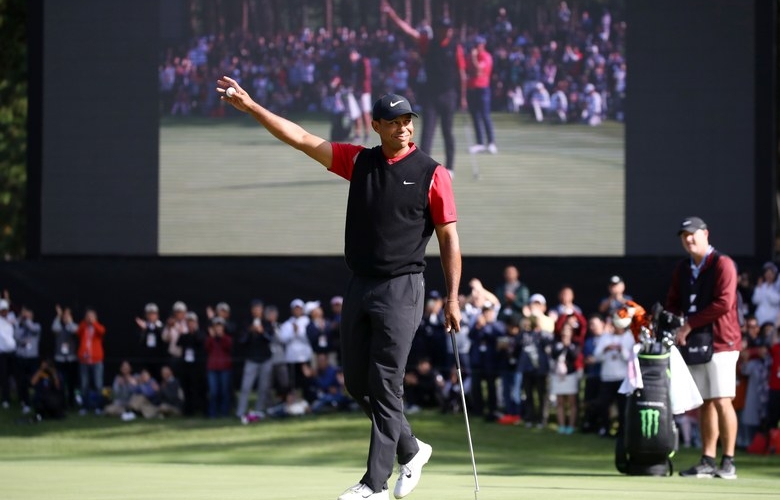 Chung Sung-Jun
INZAI, JAPAN – OCTOBER 28: Tiger Woods of the United States celebrates winning the tournament on the 18th green during the final round of the Zozo Championship at Accordia Golf Narashino Country Club on October 28, 2019, in Inzai, Chiba, Japan. (Photo by Chung Sung-Jun/Getty Images)

By John Strege
Two years after Tiger Woods’ legend seemed to have run its course, he again is building on it, his victory in the Zozo Championship on Monday once more linking him to history.

The win at Narashino Country Club in Chiba, Japan, was the 82nd of his PGA Tour career, equaling the record held by Sam Snead. It also was his third since sitting all of 2016 and playing once in 2017, when he underwent spinal fusion surgery and his future in the game was in doubt.

“It’s just crazy,” Woods said of 82 PGA Tour victories. “It’s a lot. I’ve been able to be consistent most of my career. I put myself up there with a chance to win on a number of occasions. There were plenty of times where I didn’t. But today was one of the days I was able to pull it out.”

His record-tying wire-to-wire victory in his 2019-’20 season debut came after a nine-week hiatus during which he underwent arthroscopic knee surgery. It, too, was his second win of 2019, the first coming in the Masters, his 15th major championship victory.

Woods, who took a three-stroke lead over Hideki Matsuyama of Japan into the final round of the Zozo, maintained that lead through 11 holes before darkness intervened on Sunday night. When play resumed on Monday morning, Woods completed a round of three-under-par 67 to win by three.

He finished 72 holes at 19-under-par 261. Matsuyama, who had a closing three-under-par 67, was second and Rory McIlroy tied for third with Sungjae Im, six shots back.

Woods stumbled on his first hole, the 12th, on Monday morning, hitting his second shot fat and into a front bunker, leading to a bogey to trim his lead to two. His lead went back to three when he holed a 15-foot birdie putt at the par-5 14th hole.

Matsuyama, however, was not going away quietly. He holed a long birdie putt at the par-3 16th hole, with Woods watching from the tee, and the lead again was two. It stayed that way until the par-5 18th, when Woods reached a green-side bunker in two, blasted out and holed the birdie putt to win.