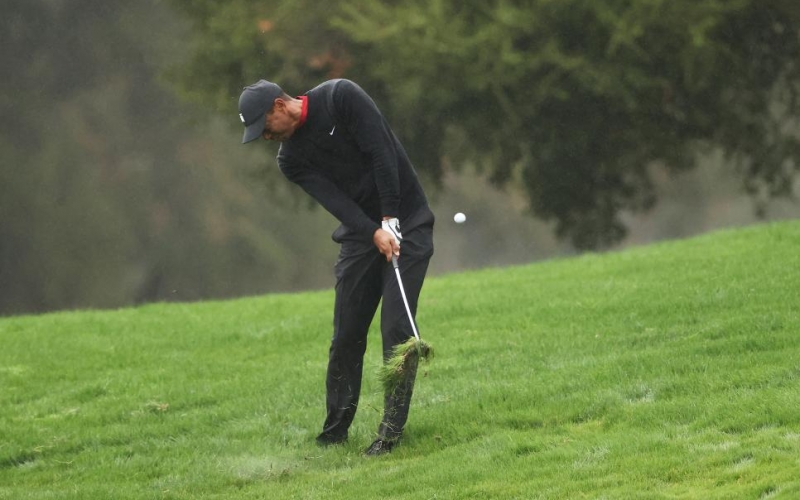 By Daniel Rapaport
THOUSAND OAKS, Calif. — He’s on to Augusta.

Okay, maybe Houston. And yet, there is still a big possibility that Sunday’s final round of the Zozo Championship was the last competitive round Woods will play before the Masters, where he’ll be keen to launch a more formidable title defense than he could muster this week.

Woods trudged his way to a two-over 74 on Sunday at Sherwood Country Club to finish the week at two under, beating just three players in this no-cut event.

“I played the par 5s awful,” Woods said. “This is, the golf course, one of the golf courses you have to take advantage of all the par 5s. They’re all reachable and I did not do that well this week. I played them probably around even par if not over par for the week. I did not drive the ball and didn’t hit my irons close enough consistently.”

At least he beat Phil. Wood and Mickelson played together on Sunday, but their walk around Sherwood was largely joyless as they combined to shoot seven over par on a cool, misty day. Due to a scheduling quirk—players were sent out in threesomes off both sides all weekend—they finished his round just 30-ish minutes before the final group, but that was all he had in common with the leaders this week.

Woods finished some 21 shots behind Patrick Cantlay’s winning total, at a golf course he’s won on five times. It should be noted, however, that all five of those victories came in his foundation’s event against fields of 18 players or less. This year’s Zozo saw 78 tee it up, including eight of the top 10 and 15 of the top 20.

With a field that stacked and a course this gettable—Sherwood has five reachable par 5s and plays under 7,100 yards, remarkably short for a par-72 layout by today’s standards—birdies were going to be the currency all week. Thus, Woods’ opening round of four-over 76 killed any chance Woods had of defending the title he won last year in Japan and notching a record-tying 83rd PGA Tour victory. After that round, the rest of the week was about progress, about getting comfortable in tournament conditions and working on the shots he’ll need at Augusta.

There were some bright spots-—namely, Friday’s 66 that included eight birdies. And Woods’ short game looked sharp at times, as did his short putting. But Woods fought a two-way miss all week and finished outside the top 60 in both strokes gained off the tee and strokes gained approach. His iron play was particularly concerning; even during Woods’ sustained struggles this year, he gained strokes on the field with his approach play in each start he made in 2020 prior to this week.

“The only thing I can take out of this week that I did positively is I putted well,” Woods said. “I feel like I rolled it great. Unfortunately, they were all—most of them were for pars and a couple for bogeys here and there, but not enough for birdies.”

The easy prescription is that Woods needs more tournament reps—it is incredibly difficult to compete with the young stars when every tournament you play is your first start in a month. Woods would certainly tell you that he’d love to play more. But his body simply won’t let him, and for Woods and his team, there is a constant push-and-pull between reps and health, and health is going to win that battle each and every time.

But Woods seems to be feeling as well as he has at any point in 2020—he said he was going to hit the gym on Monday morning and that he doesn’t plan to wait around on deciding whether to play the Vivint Houston Open.

“I’ll make the decision soon. I’m not going to wait around on that decision and commit either way, one way or the other….I’ll make a decision quickly on whether or not I’m going to play Houston or not.”

It’s certainly possible, but it’d be a first. Woods has played in 20 Masters as a professional and has never played a tournament the week before. That rhythm has yielded five green jackets. If he’s going to add a sixth, something’s going to have to click before he makes the drive up Magnolia Lane. In Houston, at home, or somewhere in between.