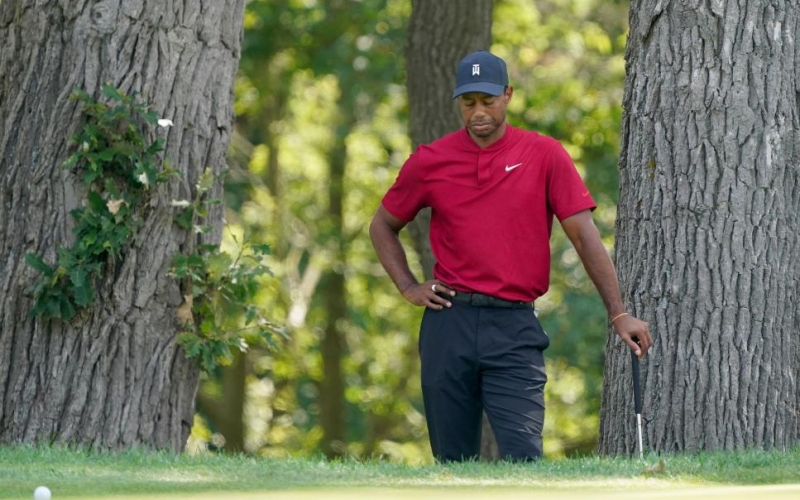 Stacy Revere
For a fourth-straight day, Tiger Woods failed to break par on an Olympia Fields course that resembled a U.S. Open set-up.

By Daniel Rapaport
OLYMPIA FIELDS, Ill. — With an unremarkable 23-inch putt for par, this strange 2019-’20 PGA Tour season came to an unspectacular end for Tiger Woods.

Woods shot his fourth straight over-par round at fiery Olympia Fields, a one-over 71 that will see him wind up well back of the top-five finish he needed at the BMW Championship to qualify for next week’s Tour Championship.

“This year was certainly one that I don’t think any of us will ever forget.”

Woods knew that Sunday’s round offered little more than a momentum-building opportunity and a chance to play another round on a U.S. Open-ready golf course. Because while the season may have come to an end, the year has not, with the U.S. Open looming less than three weeks away and the Masters less than two months after that. There was, then, incentive for Woods to find something with his game ahead of those marquee tournaments.

He seemed to be doing exactly that through 16 holes, sitting at one-under for the day and playing a relatively stress-free round.

Until he stepped to the 17th hole. (That darn 17th hole!) It foiled a solid round yet again—Woods splashed his tee shot in the water hazard down the right for the second straight day, and, for the second straight day, his attempt to advance his ball toward the green resulted in a foul ball to the left. Woods needed three more from there for a round-killing double-bogey 6, which was actually an improvement from his triple on Thursday.

“Missing the ball in the wrong spots,” Woods said. “When I missed in the correct spots, I was able to advance it and make some putts. But if I missed them in bad spots, this golf course will certainly punish you.”

Punish, indeed. Woods finished at 11 over par this week, and it’s just the fifth time in Woods’ career that he shot over par in all four rounds of a tournament.

“I didn’t play as well as I wanted to the first couple days,” Woods said. “Today was nice. I hit the ball really well and made only a couple putts, but today was more indicative of how I want to play in a couple weeks.”

Woods’ do-or-die scenario this week to get into the top 30 on the FedEx Cup points list and get to the Tour Championship was the product of two things: Not playing much during the 2019-’20 tour season, and not playing well of late. The season started on the most positive of notes, a record-tying 82nd PGA Tour victory at the Zozo Championship in Japan. Woods then finished tied for fourth at the Hero World Challenge in December and was far-and-away the best player on either team at the Presidents Cup, where he went 3-0-0 and captained the U.S. to a comeback victory to close 2019. The momentum carried into the new year, when he semi-contended at the Farmers Insurance Open en route to a T-9 finish.

Then came a disastrous weekend at the Genesis Invitational, where he finished last among players who made the cut. Then he skipped a bunch of marquee tournaments to rest a sore back. Then the world turned upside down and Woods did not play an event for more than five months before returning at the Memorial.

It’s been a slog since. He finished T-40 at Muirfield Village, T-37 at the PGA Championship and T-58 at the Northern Trust before the BMW.

Woods will now get two weeks of rest. Which isn’t the worst thing in the world, because what lies ahead tends to be the most taxing golf tournament of the year. Woods got a sneak peek at Winged Foot earlier this month, so he has a sense what’s in store. The question is can he get his game prepared with practice at home in the coming days for what’s sure to be, like the BMW, another unforgiving challenge.