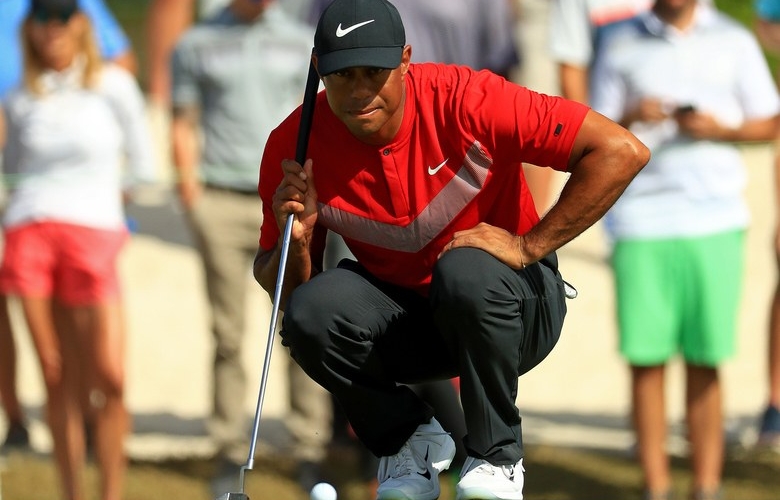 NASSAU, BAHAMAS – DECEMBER 07: Tiger Woods of the United States lines up a putt on the third hole during the final round of the Hero World Challenge at Albany on December 07, 2019, in Nassau, Bahamas. (Photo by Mike Ehrmann/Getty Images)

By Daniel Rapaport
NEW PROVIDENCE, Bahamas — Tiger Woods hit his first nine fairways on Saturday. He missed the 10th, and it cost him dearly.

Woods tugged a driver into one of Albany’s dicey waste areas left of the drivable par-4 14th green, a short-side miss that led to a costly bogey and torpedoed his chances for a sixth Hero World Challenge title. He settled for a three-under 69 and a fourth-place finish at the event he hosts, four shots behind champion Henrik Stenson’s 18-under total.

“If I would have given myself a few more looks, this might have been a different story. But I just didn’t.”

After beginning the week with an even-par 72, Woods played his way into contention with a bogey-free 66 on Thursday and a 67 on Friday. He began the final round two shots back of Gary Woodland’s lead and said he thought he needed 65 or 66 to have a realistic shot on this mostly windless day.

To shoot 65 or 66, you need to hole your makable birdie putts. Woods failed to do that on each of his first two holes of the day, burning the high edge on both and settling for tap-in pars. On the par-5 third hole, he had 263 yards to the front edge, into a slight breeze, for his second shot and blistered a 3-wood to about 12 feet. But that putt went begging as well.

That was a bit of a theme all day. Woods gave himself plenty of looks for the fourth straight round but fought his putting stroke and rehearsed releasing the putter head multiple times after misses.

“I blocked a couple today and I can’t stand that feeling. I’d much rather hook the hell out of a putt than hit some kind of block.”

He didn’t block (nor hook) his birdie efforts on six and seven, the latter of which gave him the solo lead for the first time all week.

Back-to-back birdies for Tiger and he now sits alone atop the leaderboard at -14. ?? pic.twitter.com/9r9YWVvsYw

He continued to hang around, buoyed by a birdie on `11 and his playing competitors taking a brief hiatus from the day-long birdiefest—a third of the 18-man field shot 66 or better.

Woods couldn’t muster another birdie the rest of the round, squandering scoring opportunities on 14 and the very reachable par-5 15th.

“It wasn’t a very good lie,” Woods said of his second shot on 14. “I was trying to leave it in the rough, just out of the bunker and leave it short of the flag, and it just bounced and skidded. I wasn’t trying to hit the ball anywhere near that flag, I was just trying to take my medicine, try and get up and down for par and move on. The next thing you know, I’m down the hill.”

After finishing his round with an up-and-down par, Woods stuck around the 18th green to congratulate Henrik Stenson, who only got his spot into the field this week via an exemption from Woods.

“The way that Henrik has fought his way back, the countless hours he’s hit golf balls to figure it out—there aren’t a lot of guys who lose their golf swing and come back…what he’s done, what he’s shown over his career is very impressive.”

Woods will now turn his focus toward his duties as playing-captain of the American Presidents Cup team. Next up: a 10,000 mile journey from this idyllic island to the far-off shores of Melbourne, Australia.

“We’ve got 23 hours in a tin can, so we’ve got a long way to go down there. The guys will be relaxing, doing whatever we need to do.”