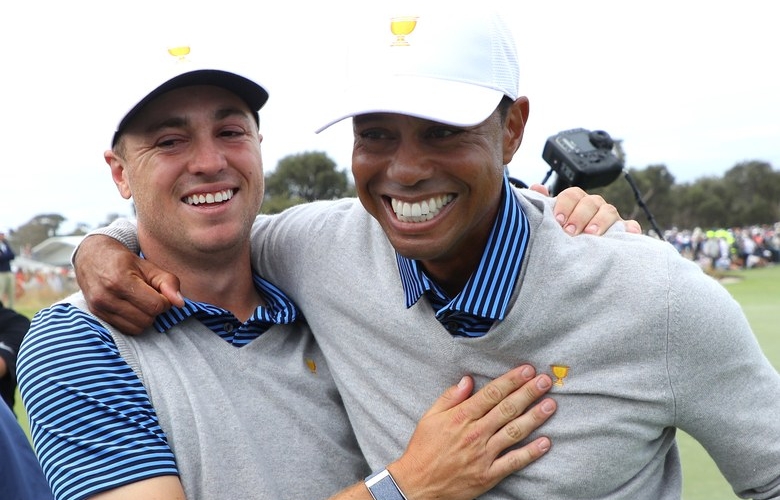 By Christopher Powers
When it comes to their head-to-head record, Justin Thomas owns Tiger Woods. Of the 14 rounds they’ve been paired together, Thomas has beaten Woods 10 times, tied him three times and lost just once in their most recent pairing, which came in the final round of the 2019 Hero World Challenge (Woods shot 69 to Thomas’ 70). Woods may have 14 majors on Thomas, but when it’s mano a mano, it’s been all JT.

Tiger will have another chance to cut into that deficit this week, as the two have been paired together for the first two rounds of the Genesis Invitational for the third straight year. In four rounds together at Riviera C.C., Thomas has shot a cumulative total of 271 to Woods’ 289. Those are big brother vs. little brother type numbers.

You’d think this would give Thomas the trash-talking edge, but that’s not been the case. In that department, Woods has been dominant. At the Hero World Challenge alone Woods outdrove Thomas and made sure he knew about it, and the following day he trolled him again with a lengthy first-tee announcement.

Apparently, Woods was just getting started. On Tuesday at Riviera, the 15-time major champion was asked about his latest pairing with Thomas, how their relationship has evolved and if he has any sense of how badly Thomas wants to beat him. Woods made sure to butter him up with compliments before dropping a fiery dagger on him regarding their Presidents Cup partnership.

“JT always wants to win. He’s highly motivated and extremely competitive and we compete in everything we do together,” Woods said. That’s one of the things that I loved about him when I exited the game for a little bit and he was kind of coming onto the scene. He’s so interested and thirsty for knowledge. We became really good friends and I got a chance to get to know him and Mike and Jenny [Thomas’ parents] really well. It’s an amazing family. “

“From there, our relationship has blossomed, and I carried his ass in Australia.”

Woods, who captained the American team to its eighth straight Presidents Cup victory in December, paired himself with Thomas in the first two sessions at Royal Melbourne. They went 2-0 together, which was particularly impressive given Thomas did not have his A game, hence “carried his ass.” Thomas did chip in quite famously on the 18th hole of their Friday match, holing a birdie putt to win 1 up and screaming “I love me some me!” in honor of Terrell Owens. But without Tiger’s all-world iron play in those matches, they could have just as easily gone 0-2.

Woods and Thomas will be paired with another familiar face in Steve Stricker this week. If Stricker wants a leg up on both of them, he might want to open with “Have either if you even won here?” on the first tee on Thursday.