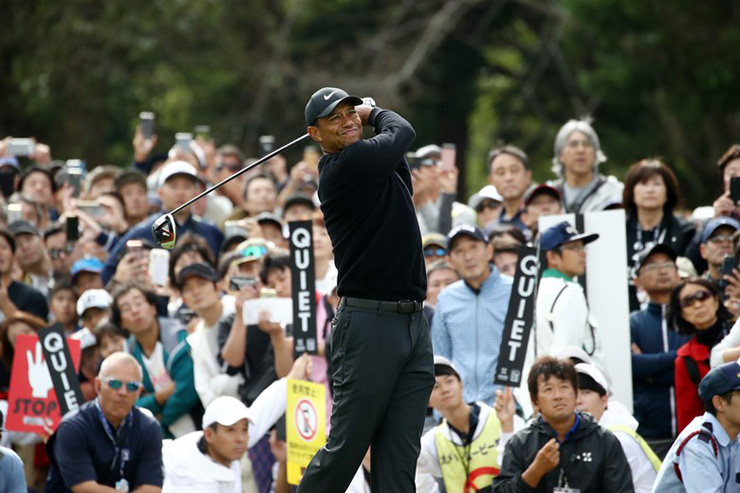 Tiger Woods hits his tee shot on the eighth hole during the first round of the 2019 Zozo Championship. Chung Sung-Jun/Getty Images

By Daniel Rapaport
Japanese fans here have been waiting 13 years to deliver a Tiger roar, so they certainly weren’t bothered by having to wait an extra hour or so.

Woods rewarded their patience with a terrific round of golf that gave them plenty to cheer about.

After bogeying his first three holes, Woods made nine birdies over his last 15 holes to shoot a six-under-par 64, a round that put him alone atop the leader board when he signed his card at Narashino Country Club. At the end of the day, he shared the lead with Gary Woodland. It was still quite the return from a two-month absence and knee surgery.

“When I haven’t played in a while, it’s always interesting when you start out, just trying to find the rhythm of the round,” Woods said. “It took me a lot longer than it should, and I made a few mistakes at the start there.

“But I flipped it. And when it flipped, it flipped big.”

Woods was treated to a hero’s welcome upon arriving at the 10th tee for his first hole of the day. The crowds have been massive all week, and Thursday’s turnout looked more like Sunday at a major than the first round at a new PGA Tour event. They are also some of most supportive and respectful sports fans you’ll find, and they wanted nothing more than for Tiger’s first official tee shot in Japan since 2006—and his first tee shot of the 2019-’20 season—to find the middle of the fairway.

He promptly hit a high, spinny 5-wood into a water hazard down the left.

“Just wasn’t committed to it,” Woods said. He would go on to miss about a seven-footer for par.

Woods missed left again with his second tee shot of the day, a pulled driver that found a fairway bunker and forced a layup. After a solid wedge, he couldn’t get that par effort to drop, either, and he looked destined for a disappointing round after three-putting the 12th.

Perhaps something clicked on the long walk through foliage between the 12th green and the 13th tee, because the player who emerged from the trees looked nothing like the guy who, in his own words, didn’t hit one good shot on the first three holes. Woods floated a short iron right over the flag on the short par-3 13th, and though he couldn’t get the 15-footer to drop, the approach was a sign of things to come. His first birdie of the day, at the par-5 14th started a run—he birdied seven of his next 10.

When he’s at his best, Woods is still the game’s supreme iron player. There is no one who varies shape and trajectory quite like an in-form Tiger, and he flashed his full arsenal Thursday in setting up the nine birdies—a high fade from the right rough to 12, a knockdown middle-iron into the par-3 third, a sky-high long iron to 10 feet on the 505-yard par-4 fourth, a high-draw 8-iron from a flyer lie on 18 that flew 200 yards.

“This is how I’ve been hitting it at home,” Woods said with a smile. “That wasn’t a real big surprise.”

And after a rough start on Narashino’s slopy putting surfaces, Woods looked more comfortable as the round went on. He poured in a 30-footer for birdie on the seventh hole and knocked his five-footer on 18 into the back of the cup.

Are you serious? ?@TigerWoods has taken the outright lead. ?

He's made EIGHT birdies in his last 12 holes. ?#LiveUnderPar pic.twitter.com/TTztLxrxyY

At the beginning of Woods’ return to this golf-enamored country—which has included a promotional tour on Sunday and MGM Resorts The Challenge: Japan Skins on Monday—he faced question after question about two topics: his health, and whether he’d use one of his Presidents Cup captain’s picks on himself. Suddenly the focus has shifted to Woods’ quest for a record-tying 82nd PGA Tour victory. Given the layoff, a subpar finish to last season and an uneven performance in The Challenge, few gave him much of a chance.

Of course, you cannot win a tournament on Thursday, but you also can’t ask for much more than a six-under round on a day where the scoring average finishes over par. This must have felt extra good given Woods’ struggles on Thursdays last season—the last time he shot an opening round in the 60s was the 2018 Tour Championship. He won that week.

“Now I’m in a position where we’re going to have a long, long weekend,” Woods said, referencing ominous forecasts for the rest of the tournament. “Hopefully I can keep it going.”

Woods will tee off his second round at 8:40 a.m. local time Friday/7:40 p.m. EST on Thursday. That’s an hour earlier than originally scheduled, as all tee times were moved up an hour in anticipation of rain.