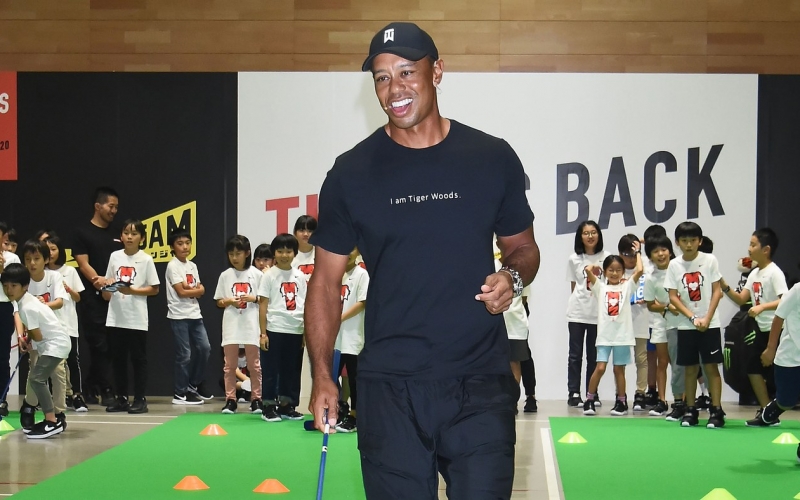 By Daniel Rapaport
“I’ve missed this,” Tiger Woods said, flashing his unmistakable smile to a horde of shrieking fans cramped inside the Nike store in Harajuku.

In the Q&A that followed, he clarified what exactly he meant by this. He’s missed Japan, where he hasn’t played an official round since the George W. Bush administration. He’s missed Asia, where he hasn’t teed it up in a tournament since 2013. And he’s missed the energy that comes with competing, which he hasn’t done since a lacklustre FedEx Cup playoff run two months ago ended one step shy of the Tour Championship.

Woods will get his first chance to wash away a disappointing end to last season this week, when he begins his 2019-’20 campaign roughly 7,000 miles from Augusta National, the sight of his latest (and greatest?) triumph. The 15-time major champion starts the competitive portion of his weeklong Japanese sojourn on Monday with MGM Resorts The Challenge: Japan Skins, where Woods will wear a mic and face off against Rory McIlroy, Jason Day and Japanese native son Hideki Matsuyama for a total purse of $350,000. The first in a series of annual exhibitions staged by GOLFTV, the one-day event is based loosely off The Skins Game, an unofficial offseason PGA Tour event last played in 2008, and will be held at Accordia Golf Narashino Country Club, which also will later in the week host the ZOZO Championship, the first official PGA Tour event played in Japan.

Monday will mark Woods’ first competitive round since he had arthroscopic surgery in August to repair minor cartilage damage to his left knee. Meanwhile, the ZOZO will likely be his last start before he must decide whether to take himself with one of his four captain’s picks for the U.S. Presidents Cup team that competes in Australia in December. Woods will want to flash better form than he showed toward the end of summer, when he missed the cut at the Open Championship, withdrew from the Northern Trust with an oblique strain and finished T-37 out of 70 at the BMW Championship. 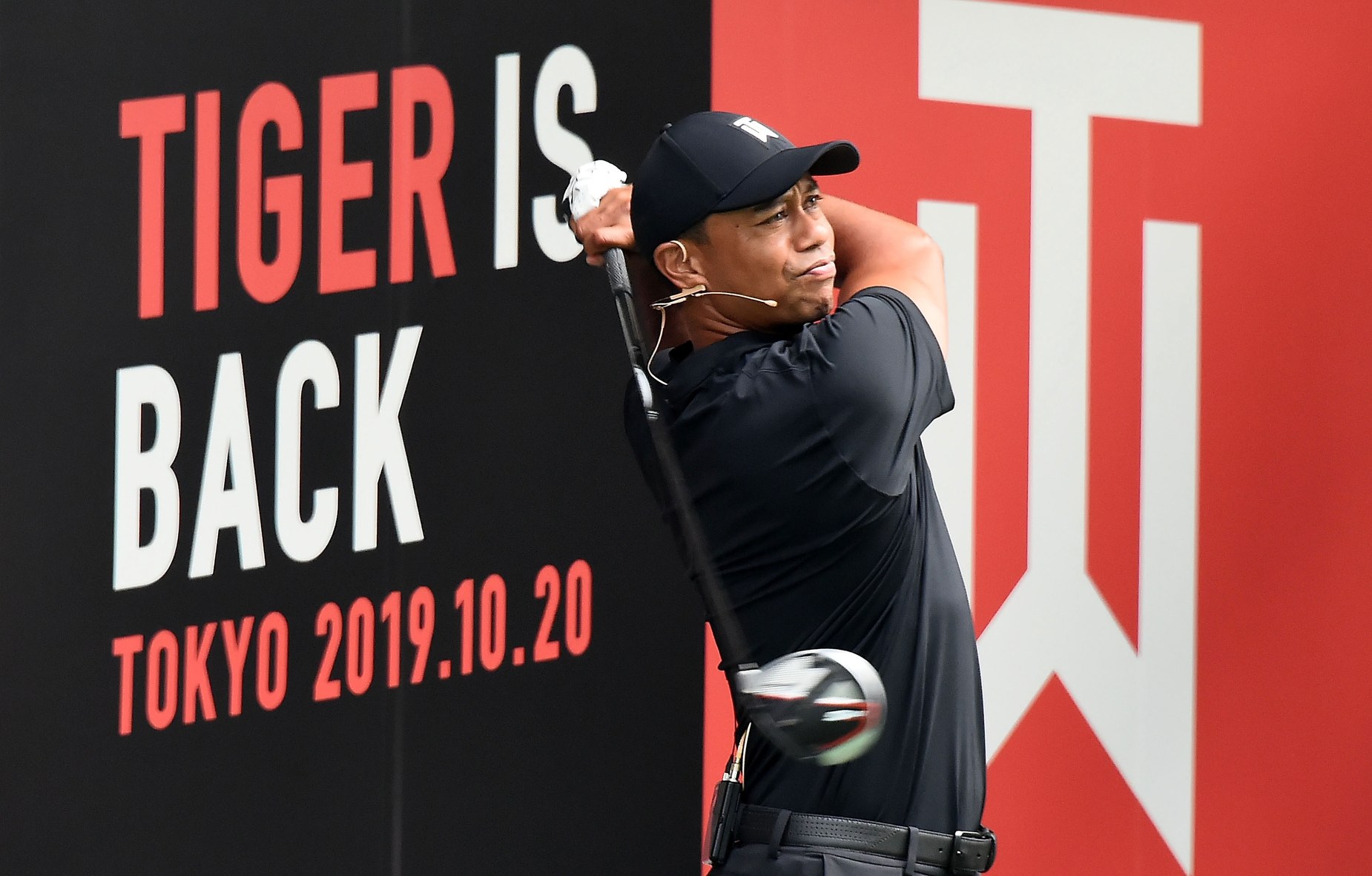 Jun Sato/Getty Images
Woods shows off his swing during a workshop at the Meiji University in Tokyo on Sunday.

That context will attract extra attention to Woods’ performance at both The Challenge and the ZOZO. Even so, this week was always going to be a spectacle. Woods’ presence in this golf-enamoured country brings with it a tangible air of anticipation—and appreciation. Woods last visited Japan in 2006, when his bid to win a third-straight Dunlop Phoenix Tournament (“the DPT” as Woods called it Sunday) ended with a playoff loss to Padraig Harrington.

Back then, a 30-year-old Woods was at the height of his powers—he had won the prior two majors by a combined seven shots, was No. 1 in the World Ranking by a comical margin and hadn’t yet undergone a major surgery. On Sunday, Woods returned to Tokyo as a 43-year-old father of two with an unfortunately extensive injury history. Still, he received what can only be described as a hero’s welcome.

Tiger playing rock, scissor, paper with a kid at a local children’s centre in Toyko ?? pic.twitter.com/3jxskEVDCf

Woods delighted fans with an appearance at the Nike store. He visited a children’s center and looked spry as he participated in a chaotic relay race involving putters, tennis balls, soccer goals and ostensibly something resembling rules. And he finished the day by giving the Meiji University women’s golf team a clinic at its on-campus practice facility.

Tiger taking on the Meiji University women’s golf team in a stinger challenge in Tokyo ?? pic.twitter.com/gdp7b9cH4L

As Woods was smiling for cameras and answering questions, two of his Challenge opponents were shooting sub-par rounds on the final day of the PGA Tour’s CJ Cup @ Nine Bridges in South Korea. Day’s one-under 71 saw him finish T-31 in his first tour start of the 2019-’20 season, and Matsuyama shot a bogey-free 65 to climb into a tie for third. The two players, both of whom will enter Monday’s competition ranked outside the top 20, are trying to recapture the magic that saw Day summit the World Rankings and Matsuyama reach World No. 2.

Then there’s McIlroy, the reigning FedEx Cup champion and PGA Tour Player of the Year. The World No. 2 was at Ajinomoto Stadium on Saturday night to watch New Zealand sadly humiliate his Ireland team, 46-14, in the quarterfinals of the Rugby World Cup. McIlroy’s last start was in September at the Alfred Dunhill Links Championship, where—much to his dismay—his 15-under total yielded only a tie for 26th, his worst finish since missing the cut at the Open at Royal Portrush in July.

If the opportunity to beat three of the game’s biggest stars in front of a global audience isn’t enough, McIlroy has a few options in the way of extra motivation: He could re-visit his loss to Woods in March’s WGC-Dell Technologies Match Play, or he could read Brooks Koepka’s comments from last week, when he said Rory isn’t a rival because he hasn’t won a major since Koepka arrived on the PGA Tour. Getty Images (3)
Matsuyama, Day and McIlroy each have their own motivations heading in

All four of Monday’s participants are familiar with high-profile events, but Woods especially should feel comfortable under the circumstances (and under the lights, as the last couple of holes will take place after sunset). This will be his 24th appearance in a made-for-TV event. The most recent came last November, when he lost a $9 million match to Phil Mickelson in Las Vegas. The first was 23 years ago in a Skins Game that included Tom Watson, who turned 70 last month.

Somewhat surprisingly, Woods has been on the winning side just 11 of the previous 23 times, meaning Monday is an opportunity to get back to .500. It’s also a chance for Tiger to show the golf world his surgically repaired knee is fine, that the late-summer struggles were but a bump in the road and that his game is Presidents Cup-ready.

Forecasting the outcome of golf tournaments is a foolish endeavour, which is why "this is Bryson DeChambeau's week" claims were met with plenty of scepticism.