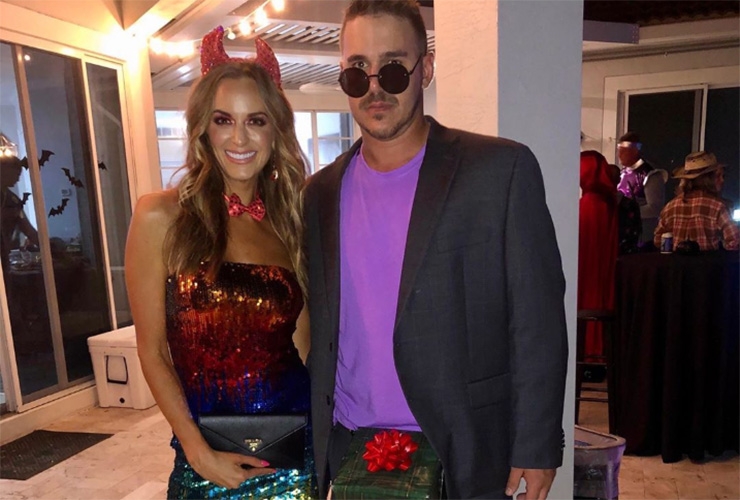 By Alex Myers
Welcome to another edition of The Grind where we wish Daylight Saving Time had come a week earlier. With Tiger Woods and LeBron James playing at the same time, I hadn’t been so excited about staying up late on a weekend night since I was in college. But come Sunday morning, I really could have used that extra hour of sleep. Fueled by adrenaline and Monster (kidding, I haven’t had one of those since college), though, I put on my Tiger (business casual) red and powered through. Let’s jump right in because we have a LOT to talk about.

Tiger Woods: Remember when people were writing Tiger’s career obituary after that ugly first round at the Open in July? Even though he had won THE MASTERS just three months before? Whoops. Don’t underestimate this guy. Ever. 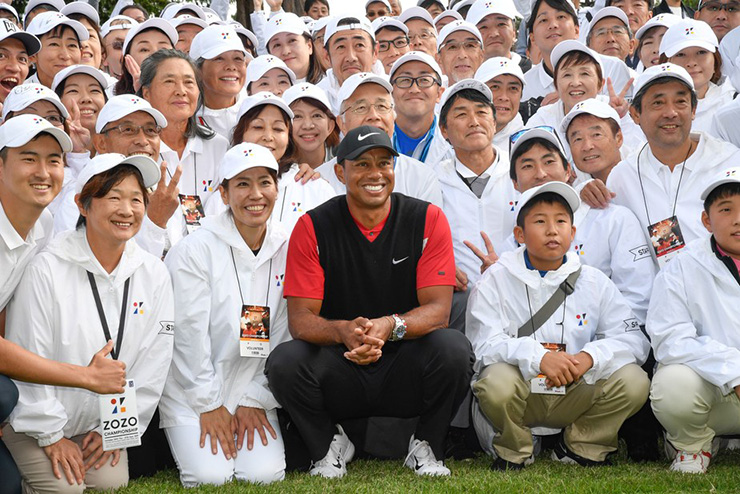 Even after bogeying his first three holes on Thursday, he shot 64. Even after eating and getting stranded at a Domino’s on Friday, he shot 64 on Saturday. And even having to play 29 holes on Sunday, he maintained his lead and closed the deal on Monday for his 82nd career PGA Tour title, tying the great man he met when he was just a young Tiger cub drinking soda and already wearing red: 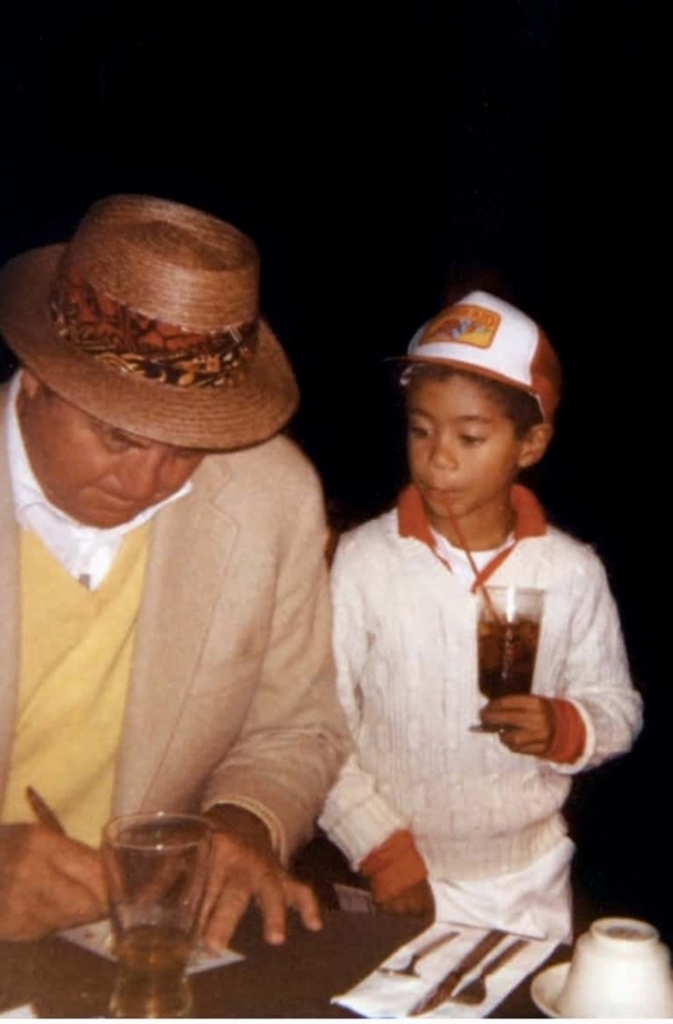 Tiger Woods with a 54-hole lead: Viewers were more saturated with these stats than Narashino Golf Course after six inches of rain, but they can’t be pointed out enough. Woods is now 46 of 48 when it comes to closing out tournaments in which he holds at least a share of the 54-hole lead. That’s 96 per cent. And his conversion rate is a perfect 25 of 25 when entering the final round at least three shots in the lead. Amazing. 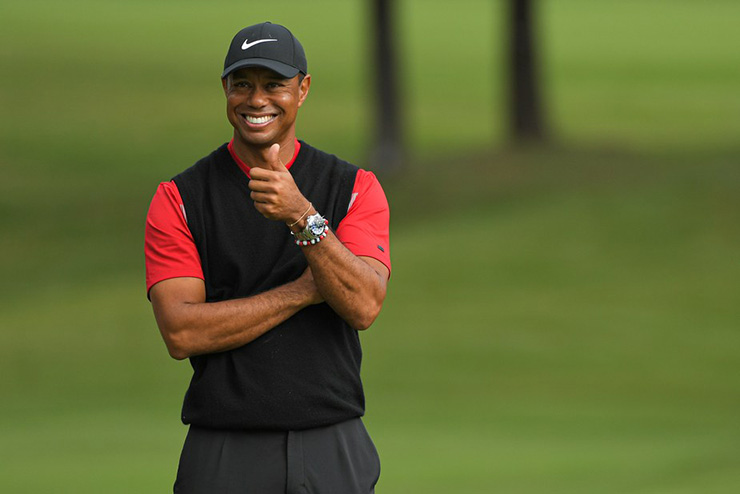 There are so many staggering stats surrounding Woods’ 82 wins (Here, I made you a handy guide), but his ability to hold a lead might be the most remarkable. Speaking of stats, Woods’ career winning percentage is an absurd 22.8. With three wins in his past 14 starts, though, his winning percentage during that span is 21.4. In other words, he’s still winning at a ridiculous rate, so be careful when writing him off next time.

Narashino Country Club’s drainage system: This was the golf course on Friday:

Golf course has received a staggering amount of rain today.. Under this water is the 10th fairway somewhere. You can see the green in the top of the picture. This course drains incredibly well and will be ready for us tomorrow, tee times are now between 9.30-11.30 Sorry to the fans that didn’t get to see any golf today and travelled to the course. However we will now be using Monday to finish. 👍🏼

And they played the next day! Sure, the par-4 10th was shortened to a par-3 distance, but even Augusta National and its fancy subair system had to be impressed. Like all winners, Woods thanked the grounds crew during the trophy ceremony, but this time, he really meant it. Those guys were miracle workers.

McCord and Kostis: In a surprising shakeup, CBS didn’t renew the contracts of either Gary McCord and Peter Kostis, letting two longtime broadcasters go (McCord had worked with the network since 1986, Kostis since 1992) rather unceremoniously. “Bottom line, they fired me,” McCord told Golf Digest’s Dave Shedloski. I’m sad to see them go, especially in this manner. Gary once signed a golf ball for me in a parking lot when I was in high school. And Peter, well, just look at him lugging all that equipment around! 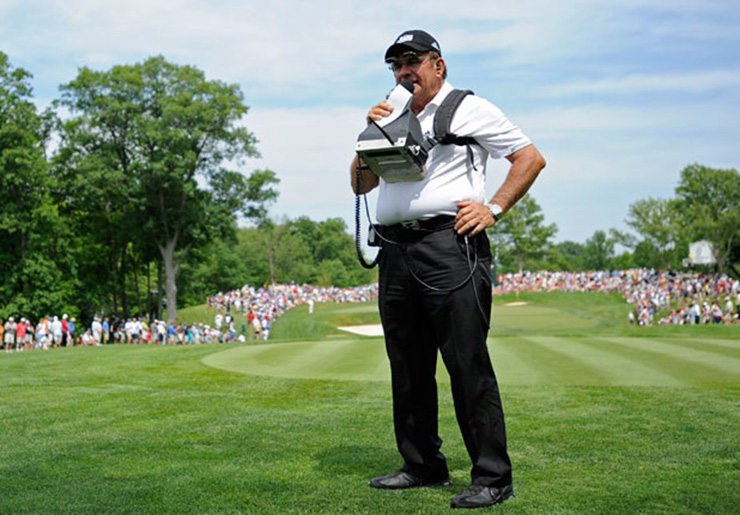 He might be the hardest-working man in the golf biz(hub). But seriously, they will be missed.

Trying this Bubba Watson tee shot: To be clear, I’m fine with Bubba going for this. In fact, it’s one of the most creative and impressive shots of the PGA Tour season. Seriously, I can’t stop watching:

This is the CRAZIEST golf shot I have ever seen in my life!! Wait till the end!!!! @bubbawatson giving a new meaning to cutting the corner on the par 5 @zozochamp 👀 🤯 pic.twitter.com/UTHf0nfGl6

But think of the copycats out there doing this at their own munis? Golf courses all over the world should probably think about adding internal out-of-bounds signs to prevent injuries.

Tiger’s win total: As cool as it was to watch Woods tie this longstanding record, in reality, he passed it long ago. As I’ve pointed out before, using the same criteria for Snead’s total (including team wins!), Tiger should now have 96 wins—meaning golf fans should be charged up about him CHASING 100 (sounds cooler, right?) than 82. 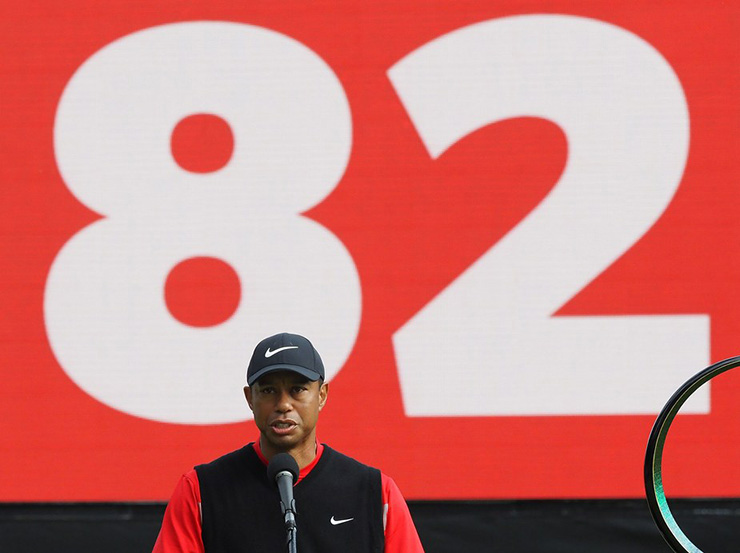 Hopefully, someday, a panel of golf historians will gather to comb through Woods’ record and make this adjustment like those assembled in the late 1980s to officially establish Snead’s mark. And if/when they do, I’ll be happy to help.

The PGA Tour heads to Shanghai for the WGC-HSBC Champions, AKA that tournament with a lot of letters in the title. Those not fortunate enough to qualify for the event will be playing in the inaugural Bermuda Championship (or taking the week off altogether like Tiger).

—Bubba would try something like that at Augusta National (Maybe on No. 18?): 1 MILLION-to-1 odds

—Tiger Woods is picking himself for the Presidents Cup team: LOCK

—No one in Shanghai or Bermuda will ever threaten Tiger’s 82 wins: Also a LOCK

The bizarre scene caused by no spectators allowed on the grounds for Round 2 Saturday in Japan was a no-brainer:

Tiger on the 1st tee with no fans in the grandstands is not something you see often… pic.twitter.com/tufJnEopTB

Although, this spectator shot is pretty good too …

We’ve seen plenty of Tiger golf clinic videos before, but probably never quite the reactions he drew from these Japanese fans:

And how about this video of Tiger nearly being taken out by a microphone?!

To think, he might still be “Chasing 82” if that had hit him a bit harder. Scary stuff. Let’s all promise to handle this guy with a little more care, OK?

QUOTE(S) OF THE WEEK

“I think the player definitely got the captain’s attention.” —Tiger Woods on the prospects of making himself a playing captain. Good answer, but Gary Woodland might have topped it when asked if Tiger should pick himself for Team USA. “If he doesn’t, that’s … dumb.” Good call, Gary.

Tiger’s dominate game,spirit, competitive juices,work ethic,and desire,I marvel at !Those of us that have played competitive sports,understand how special he is, and how lucky we are to witness his talents. 22 yrs ago,we knew he was different,but this? We all learned, didn’t we👍

A classy, sharp, and self-deprecating tweet from the guy who has been ridiculed through the years for saying “You’ll learn” to a young Tiger Woods during an infamous interview. Well played, Curtis. Of course, I’d expect nothing less from a fellow Wake Forest alum.

Bringing my love for golf to the football field! 🔥 made by: @MACHE275 #gamedaycleats #cleatheat #custom pic.twitter.com/VwIlhnHZDk

As if I needed another reason to like this New York Giants wide receiver.

While Woods was winning in Japan, golf’s injured superstars were hanging out at quite the Halloween bash in Jupiter, Fla. Here’s Brooks Koepka invoking a classic Justin Timberlake “SNL” sketch and Jena Sims going with the classic “devil” look (What percentage of women dress as devils or cats? 80? 90? Tiger with a 54-hole lead?):

And how about Dustin Johnson and Paulina Gretzky with a nod to “Semi-Pro”?

Freeze… You have the right to have a Happy Halloween 🎃

And not to be outdone, Tori Slater, went as Julia Roberts from “Pretty Woman” while boyfriend Daniel Berger played in Japan:

Too bad, because Daniel could have pulled off a good Richard Gere:

Congrats to my sister @alyberger and my new brother in law @m.gutierrez09 ! So happy for you

I hope that didn’t cost the couple the party’s best costume prize! Oh, and in case you’re wondering, I’m not wearing a Halloween costume for about the 20th consecutive year, but my 19-month-old daughter is dressing up as a dog because she’s obsessed with dogs. So check back next week for photos.

Wait … this can’t be right … Phil hasn’t posted anything on social media in more than a week? Has anyone checked on him lately?

THIS WEEK IN EDDIE BEING EDDIE

Eddie Pepperell is doing everything he can to find Martin Kaymer a girlfriend, including signing him up to appear on a British reality TV show called “First Dates.”

It’s now my life goal to find our Dear Martin the love of his life 😍 https://t.co/FhdCkgxrjw

What a great friend.

The United States Postal Service will honour Arnold Palmer with a commemorative stamp in 2020. Considering how much money on postage he is said to have spent responding to fans, no one has ever been more deserving of such an honour. … Congrats to Ha Na Jang, who made a rare LPGA cameo in her home country and won the BMW Ladies Championship. She’s still got it after leaving the LPGA Tour two years ago. Then again, she’s only 27 so her still having “it” isn’t too surprising. … Congrats to Steven Brown, who was on his way to Q School for the seventh time in eight years before stunning the field at the Portugal Masters for his first career European Tour title. But has he done anything to help Martin Kaymer’s love life? … And a special congrats to the 30 PGA Tour pros who made Golf Digest’s latest Nice Guys list. With a top three of Rickie Fowler, Gary Woodland, and Jordan Spieth, who says nice guys finish last? 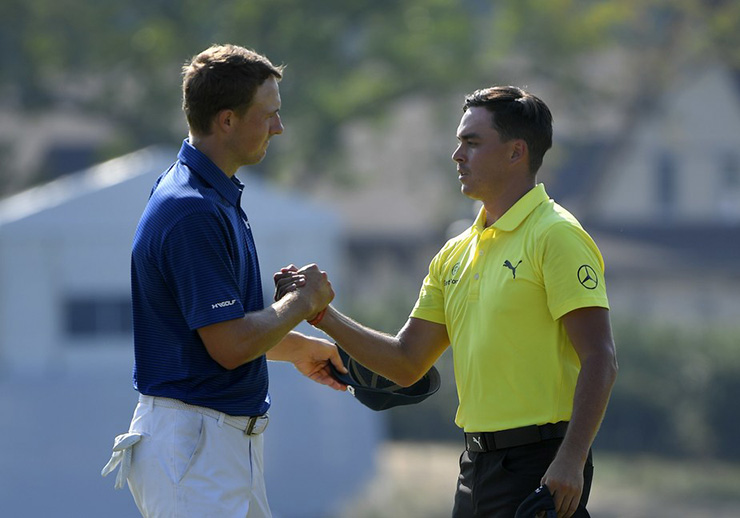 Well, Spieth finished pretty far down the board in Japan, but you get the point. …

Will I ever wear a Halloween costume again?

Who will inherit the Konica Minolta Bizhub Swing Vision Camera?