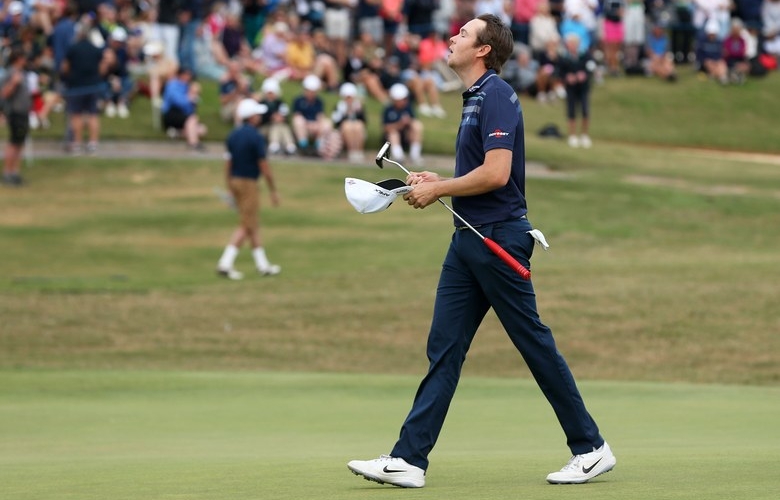 By John Huggan
The last regular-season event on the European Tour is one invariably filled with tales of tour cards lost and found. And the 2019 Portugal Masters did not disappoint. The happiest man on the Dom Pedro Victoria course at Vilamoura, however, was surely Steven Brown. The 32-year old Englishman arrived on the Algarve a lowly 150th on the Race to Dubai and mentally preparing himself for what would have been a seventh visit to tour school in his eight-year professional career.

Things — and minds — can change quickly though. With a 72-hole aggregate of 267, 17-under par, Brown claimed his first European Tour victory by a shot over a pair of South Africans, Branden Stone and Justin Walters. Way more importantly given his previous status, Brown — whose closing rounds of 67-65-66 all beat his season’s best of 68 — now owns a two-year tour exemption. In the shorter term, his 81-place rise on the money list means he will also be part of the upcoming Turkish Airlines Open, the first of three post-season playoff tournaments.

“It’s hard to put into words,” said a suitably stunned Brown, who was part of the winning Great Britain & Ireland Walker Cup squad at Royal Aberdeen in 2011. “It was quite a weird day. You never know with this game. I’ve played so well the last month, in complete contrast to the rest of year. But I arrived just trying to get my game in shape for tour school to be honest.

“The last few weeks I’ve had a calmness in my head. I liked the fact that I had to go for it today. It was do or bust. The shot I hit into 12 (a 270-yard 3-wood to 10 feet that set up an eagle on the par 5) is the best I’ve ever hit. But Branden was still ahead of me. So I had to keep going. Now I’m heading to Turkey. Which is amazing. I went there a year ago as first reserve and didn’t get to play. So it will be nice to tee it up this year.”

Vying with Brown for storyline of the week was Walters, who arrived 121st — six spots short of safety — on the Race to Dubai. Six years on from a runner-up finish in this same event that belatedly saved his card, the 39-year old Springbok repeated his bold feat on both counts to close out a year of struggles on and off the course. A torn calf muscle saw the two-time All-American at North Carolina State play the Scottish Open on crutches, before his father tragically passed away only a few weeks later.

“I left it all out there,” he said through tears that prematurely ended his post-round interview. “But if you had given me this at the start of the week I would have grabbed it. This is very satisfying after all I’ve been through.”

Two agonising accounts stand out though.

When Paul Dunne finished T-4 at the Made in Denmark event in early September the Irishman’s exempt status appeared secure. But it wasn’t. The man who, as an amateur, led the 2015 Open Championship at St. Andrews with a round to play and only two years ago was British Masters champion, missed the cut for the 12th time in 14 starts since Denmark and lost his card.

Spare a thought too for Lee Slattery. The enormously likeable Englishman is also headed to tour school — what will be his tenth visit — at the end of a year in which he seven times failed to make the halfway cut by a single shot. One of those narrow misses came in the U.S. Open at Pebble Beach, where the two-time European Tour winner made a double-bogey seven on the 18th hole on day two. By such fine margins do careers head in wildly different directions.

Each year on tour it is the same. For every Steven Brown there are many more Lee Slatterys or Paul Dunnes. Or Hugo Leons. The Chilean ended up 116th on the Race to Dubai, in the place no one wants to be — one spot from safety and only 6.1 points behind a no-doubt much relieved Bhullar Gaganjeet.