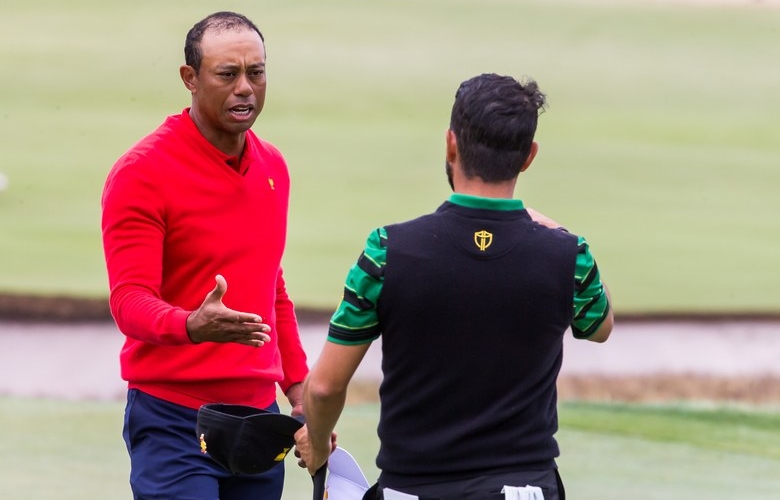 By Alex Myers
Tiger Woods had one of his most iconic reactions at the 2009 Presidents Cup, twirling a long iron and then holding it off to the side as he strutted toward the 18th green at Harding Park. A decade later in the same event, he may have topped it.

As he did in 2009, Woods went undefeated as a player in this year’s event, but he saved his best golf for Sunday’s single session. And he saved his most memorable moment of the week for his final putt. Check it out as he buried his seventh birdie of the match to close out Abraham Ancer, removing his hat as his golf ball disappeared in the cup.

Walk it in? Nah, removing the hat before it’s in the hole.

“Well, when it was about probably like six feet out—the match was over,” Woods told Golf Channel’s Steve Sands after. “I might have taken the hat off a little bit early, but it was over.” Boom.

But Woods’ duties for the day weren’t over. After a brief celebration, he put on an earpiece and switched into captain mode to monitor the rest of his surging team, which followed Tiger’s lead and rallied to win the biennial event for the eighth straight time.

Ancer, meanwhile, was dealt his first defeat in what was a brilliant Presidents Cup debut. The 28-year-old from Mexico who said last month he wanted to play Woods got his wish and played well—he just ran into a vintage Tiger performance. With a vintage Tiger reaction. Like that pose from Harding Park 10 years ago, golf fans are going to be seeing this one for a while.