Tiger Woods is ready for a two-week sprint, beginning with the Hero World Challenge 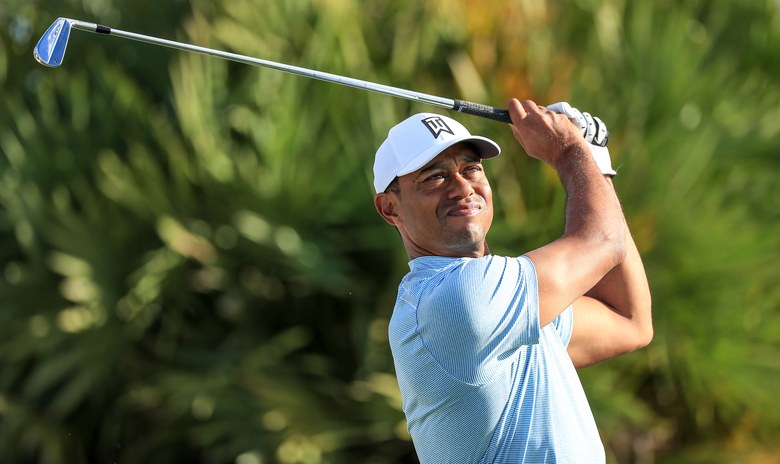 David Cannon/Getty Images
Tiger Woods plays a shot during the pro-am ahead of for the 2019 Hero World Challenge.

By Daniel Rapaport
NEW PROVIDENCE, Bahamas — Tiger Woods took a leisurely stroll around Albany Golf Club on Tuesday, enjoying a stress-free pro-am in front of 30ish spectators. It was a laidback day of smiles and catch-ups and ocean breezes—the hardest decision Woods faced was whether to wear a light sweater and be a bit too warm, or go with just a polo and risk catching a chill. The Bahamas force a man to make tough calls like that.

Woods was asked what he likes about playing golf at this beachside resort community, where he owns a property: “It’s very chill.” He looked and sounded every bit like a man enjoying his last day of semi-normalcy before a frenetic 12-day stretch—a stretch that will require him to, pardon the cliché, wear multiple hats.

The whirlwind kicks off on Wednesday when Woods will tee it up against 17 of the world’s best in the Hero World Challenge, his first event since tying Sam Snead’s record of 82 PGA Tour victories at the Zozo Championship in October. He’s also playing host this week, as the event is run by his TGR Live venture and benefits the TGR Foundation.

After tournament play wraps up early Saturday afternoon, Woods will immediately shift his focus to captaining—and playing for—the U.S. Presidents Cup team, which will take on the Internationals beginning Dec. 12 at Royal Melbourne in Australia. For Woods, December is usually a light month that features much rust and little golf outside the Hero. Not this time.

“I took some time off, did some things around the house, and that’s about it,” Woods said of his post-Zozo activity. “Then I’ve been organizing these two weeks—working with my staff here, and then working with the Tour, and communicating with the guys for next week, making sure everything is in line.

“It’s long days, long nights. I’m still playing, too, so I gotta practice, I gotta train, lifting. It’s burning the candle on both ends for two weeks in a row. It’s gonna be tough.”

From a pure golf perspective, Woods is looking to replicate his commanding performance in Japan, when he led wire-to-wire and looked in complete control of his game. That week marked a remarkable improvement from his form toward the end of last season, when he finished this year with a missed cut, a withdrawal and a T-37 out of 70 players. On Tuesday, he spoke again about the monumental impact his recent knee procedure had on his golf swing—“I’m able to make moves that I haven’t for quite some time”—and struck the ball purely during Tuesday’s wind-swept practice round.

The biggest winner on Tuesday, however, might have been Joe LaCava. Woods’ full-time caddie had something of a day off thanks to David Gilbert, who carried Woods’ bag after winning a foundation auction back at Tiger Jam in May.

“I brought 21 guests with me here,” said Gilbert, a businessman living in San Diego. “A lot of good friends and family. It’s a blessing to have this opportunity and get this experience.”

Woods will begin his first round alongside Justin Thomas at 11:35 a.m. (EST).