Tiger Woods gets hot to finish his first round, showing signs of his best golf since the restart 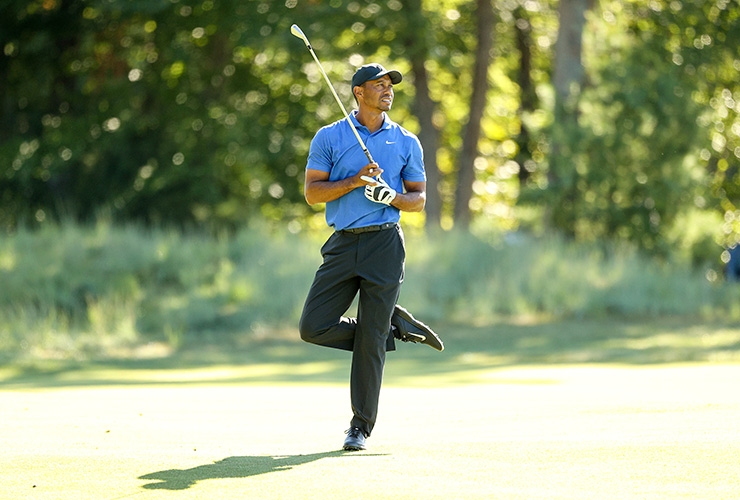 By Daniel Rapaport
Tiger Woods had hardly missed a shot through eight holes at TPC Boston. Yet he found himself one over par, struggling to find the momentum that has eluded him in his two post-COVID starts, in danger of squandering another solid ball-striking day and leaving the course with nothing to show for his efforts.

Time to panic? Nah. Time to kick things into gear.

Woods did exactly that. He birdied his ninth hole of the day and played his final 10 in four under par to post a three-under 68 amid pristine scoring conditions on Thursday morning. It was an ideal start to the Northern Trust, the first of three FedEx Cup playoff events, and Woods put himself in good position to chase a second victory at TPC Boston (which is actually closer to Providence, R.I.)—where he won the Deutsche Bank Championship in 2006.

Tiger’s three-under total was his lowest opening-round score since his historic 82nd win earlier this season at the Zozo Championship in Japan.

Woods entered the week ranked No. 49 in the FedEx Cup standings despite playing only five events in the truncated regular season. He is virtually guaranteed to qualify for next week’s BMW Championship, which will feature the top 70 in the standings after this week. And Tiger knows after so-so showings at the Memorial and the PGA Championship, he has some work to do to get into the top 30 and back to Atlanta for the Tour Championship.

“I’ve got to get to Atlanta first. I’m not in,” Tiger said after his round. “There are guys if they wanted to they could take a week off here … or next week.”

A 68 to open up the playoff run. 🐅@TigerWoods is within striking distance. pic.twitter.com/zKASZIiDdM

It appears Tiger is embracing this week to get his swing dialed in for a playoff run and a busy end of summer/fall schedule of golf. Apart from one stiff day at the Memorial, the problem for Woods in those two starts was not swing nor body-related. He struggled on the greens so much at Muirfield Village that he decided to bench the trusty Scotty Cameron that has brought him 14 of his 15 major championships, in favour of a slightly longer and heavier Scotty Cameron prototype for the PGA Championship. The experiment was equal parts unsuccessful and short-lived; Woods did not roll it well at TPC Harding Park and opted to go back to the familiar flatstick for this week at TPC Boston, which features faster bentgrass greens than what he saw in San Francisco.

The early returns of that decision: positive. Woods picked up almost 1.5 shots on the field putting and went 5-for-5 on putts between four and six feet.

“When I was at home practising I didn’t really use [my old] putter,” he said. “I was practising with the other one to make sure I could get some reps and get some feel, and all of I sudden — heck with it, I’ll just put [the old putter] in play and see how it goes, and it worked.”

It was a masterclass in patience. Starting on the back, Woods could not get anything going over his first eight holes, giving himself no birdie putts inside 15 feet until the par-5 18th. He holed that one and added back-to-back birdies at Nos. 3 and 4, the first coming from 16 feet and the second from five after his attempt to drive the par-4 fourth came just short in a bunker.

Woods took advantage of the reachable par-5 seventh for his fourth birdie of the day and hit his most impressive shot at the 220-yard par-3 eighth, a sky-high long iron that plopped down and trickled out to seven feet. The putt was dead center, and Woods was four under for the day.

The competitor that Woods is, he’ll leave the course a bit perturbed after a closing bogey, which was set up by a foul ball right off the tee. His second shot finished in thick rough just short of a greenside bunker, and he could not convert from 16 feet for par.