Tiger Woods DUI Arrest: The potent medicines Woods said he was taking and their side effects 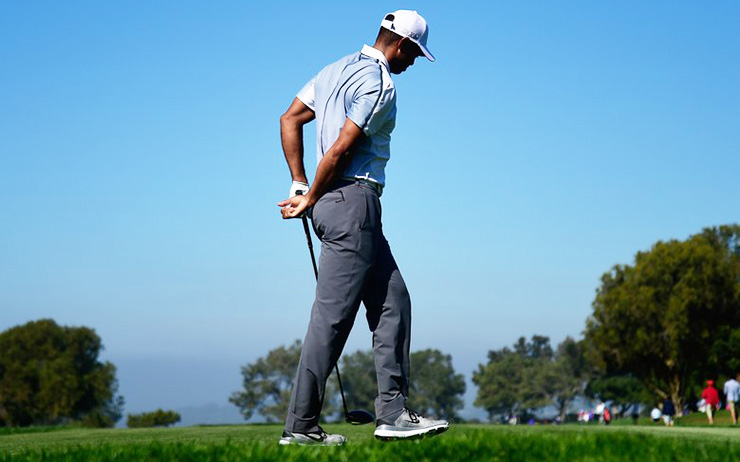 Among the prescribed medications Tiger Woods told police he is taking when he was arrested for DUI in the wee hours of Monday morning in Jupiter, Fla., is something called Soloxex.

What is it? Good question, because no one seems to know.

“That’s a bit of a mystery,” said Clifton Page, MD, primary care sports medicine physician at the University of Miami Sports Medicine Institute. “I can’t find it anywhere. But given the derivative it would probably be a muscle relaxant combined with an anti-inflammatory.”

If it is indeed a muscle relaxant that Woods simply mispronounced the name of — something that wouldn’t be out of the question given his dazed-and-confused behavior during questioning and field sobriety tests — drowsiness and lethargy would be side effects, according to Page.

Vicodin, a powerful pain killer, is another prescription listed on the police report. Its side effects range from lightheadedness, dizziness, vomiting and blurred vision to more serious ones such as a slow heartbeat, confusion, unusual thoughts or behavior and convulsions.

“It can impair your functions and how you think,” Page said. “It slows reaction time. It slows how you process information and can cause you to misinterpret information.”

Typically, Page said, someone who undergoes back surgery would be prescribed Vicodin in dosages between 5 and 10 milligrams with the patient taking a dose every six hours. The prescription is typically for about two weeks before the patient would be weened off to a less potent painkiller. Woods underwent spinal fusion surgery, his fourth back procedure since early 2014, on April 19.

Torix, another drug mentioned by Woods, is an anti-inflammatory medication — effectively a better form of ibuprofen, with the biggest side effects ranging from dizziness to impairing kidney function, which could lead to internal bleeding.

Another anit-inflammatory listed was Vioxx. Though Woods told police he hasn’t taken it in over a year, it hasn’t been on the U.S. market since getting pulled in 2004 because of dangerous side effects that include a heart attack.

“It would be hard to obtain,” Page said. “But you could find a generic version overseas or online.”

Alone and when taken properly, any of the first three aforementioned drugs would likely be mostly safe. Taken incorrectly or together, however, can be another story.

“Any time you mix medications the danger is there can be a reaction because medications alter different pathways and you could be more sensitive to the effects of the other medications,” Page said.

RELATED: The sad story of Tiger Woods grows ever sadder

Not mentioned in the report, however, is prescription sleep aid Ambien.

In 2009, when Woods crashed his Cadillac Escalade into a fire hydrant outside his then-Orlando home after wife Elin Nordegren had reportedly discovered that he had been having extramarital affairs, Woods had reportedly taken Vicodin and Ambien earlier in the evening.

In the wee hours Monday, Woods did not mention Ambien. A toxicology report from a urine test is expected back in about two weeks and will reveal what was in Woods’ system at the time police found him asleep at the wheel in a Black Mercedes, the engine running but stopped in the right lane with the right blinker on and damage to his driver’s side tires, both bumpers and a tail light.

“As a sleep medication it causes drowsiness, and can cause dizziness, lethargy and confusion. If you take it improperly it can be dangerous. A mix of Ambien and Vicodin; that’s a bad mix.”

A toxicology report would reveal if Ambien was in someone’s system, though, like with other medication it would only show a range of the amount and would likewise be imprecise in terms of showing when the person took the medications.

Woods, who said alcohol was not involved and blew a 0.00 in two breathalyzer tests, issued a statement on Monday evening saying, in part, that he had “an unexpected reaction to prescribed medications” and that he “didn’t realize the mix of medications had affected me so strongly.”