Tiger Woods drops the mic during victory press conference: “Abe wanted it, he got it” 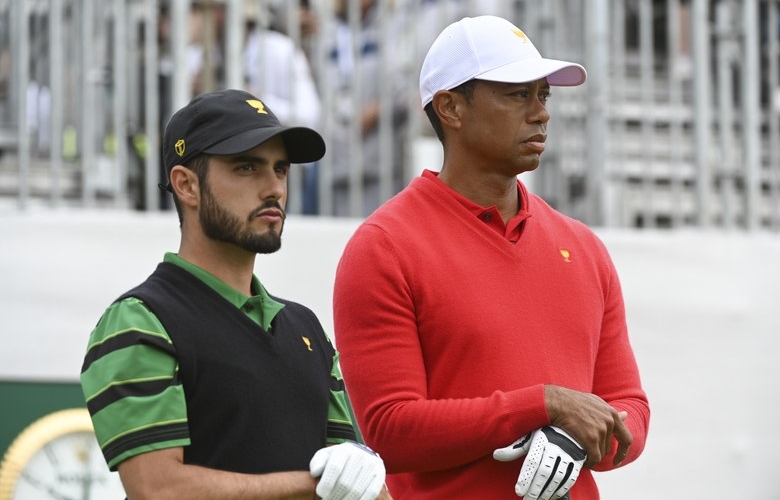 VICTORIA , AUSTRALIA – DECEMBER 15: International Teams Abraham Ancer of Mexico and U.S. Team Captain Tiger Woods look on at the 1st tee during the final round singles matches at the Presidents Cup at The Royal Melbourne Golf Club on December 15, 2019, in Victoria, Australia. (Photo by Ben Jared/PGA TOUR via Getty Images)

By Christopher Powers
We thought Tiger Woods’ most boss move of the Presidents Cup was him lifting his hat off before his winning putt dropped against Abraham Ancer. Turns out, Woods was just getting started.

Last month, at the Mayakoba Golf Classic in Ancer’s home country of Mexico, the 28-year-old spoke with reporters prior to the tournament and expressed his desire to play the 15-time major champion in Sunday singles at Royal Melbourne. The quote was not a challenge of Woods, more Ancer discussing a dream scenario of playing against the greatest player of all time in his first Presidents Cup.

“I would like to play against Tiger (Woods),” Ancer said. “But the truth is that our objective is to do everything we can to win. Winning a match in the singles would be very special, so we need to try to get the cup.”

Ancer got his wish when International team captain Ernie Els selected him to go out first in singles, and Woods, the American captain, countered with himself. He went on to win 3 and 2, securing the first point for the U.S. team, which completed the comeback to win 16-14. Was Woods planning to pit himself against Ancer the entire time, or was he always going out first no matter who Els put out there?

Judging by what Woods said in the American team’s victory press conference, it may have been the former. While discussing how he felt he played this week, Woods dropped the damn mic.

“I hit it well this week,” said Woods. “I was responsible for three points, JT and I went and got two, and I happened to play well and got Abe today, and, Abe wanted and he got it.”

Nothing gets past Tiger, who was later asked to clarify if he knew of Ancer’s comments at Mayakoba. Tiger smiled and said, “Yes. Next (question).” Come at the GOAT, you best not miss.

Woods finished the week 3-0-0 and somewhat spoiled what was an incredible week up to that point for Ancer. The rookie was by far the team’s best player next to fellow rookie Sungjae Im, having gone 3-0-1 before facing Woods, who, unfortunately for Ancer, might be the best player in the world right now.