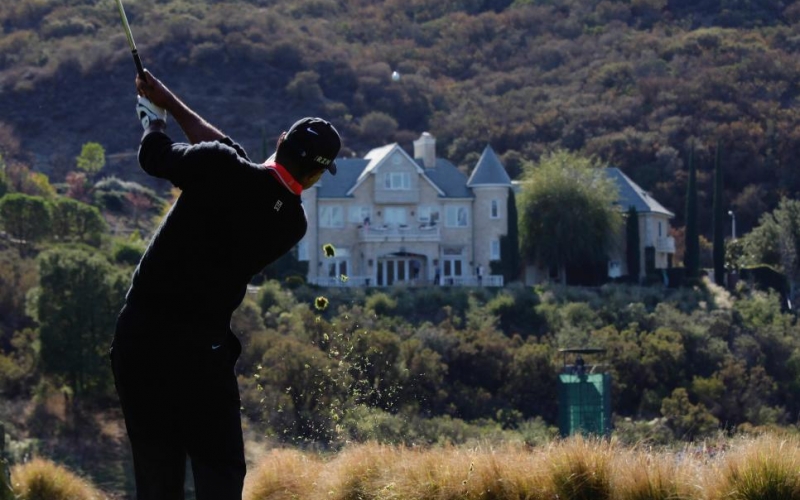 Paul Mounce – Corbis
Tiger Woods tees off on the 8th hole during the fourth round of the Northwestern Mutual World Challenge held at Sherwood Country Club.

By Daniel Rapaport
It does not seem possible that Tiger Woods’ win in Japan was less than one year ago. To use the word of the year, an unprecedented amount has transpired since last year’s inaugural Zozo Championship: Woods’ game peaked in Australia and has valleyed since; Bryson DeChambeau put on 40 pounds and shoved golf into a locker; and COVID-19 turned everyone’s world upside down.

Yet if Woods’ chances of repeating as Zozo champion, and claiming a record 83rd career PGA Tour victory, are hindered by circumstances, they’re helped in one unique twist of fate. Woods is defending his title 5,400 miles away from the place he won it at a golf course he’s very familiar with.

In August, the PGA Tour acknowledged hosting tournaments in Asia would not be possible due to travel restrictions surrounding the pandemic. Officials worked with tournament sponsor Zozo to secure a golf course in the United States that would attract a prestigious field, setting on Sherwood Country Club in Thousand Oaks, Calif.

For a number of players competing, this won’t be their first time around the Jack Nicklaus design, which sits on a hilly piece of property roughly 45 miles from downtown Los Angeles. From 2000-2013, Sherwood played host to what is now the Hero World Challenge, the limited-field event hosted by Woods and benefitting his foundation.

We caution against putting too much weight into limited-field events, particularly one with an 18-man field, as the Hero has. But Woods’ history at Sherwood is most impressive. Woods played in 12 events at Sherwood and finished worse than second just twice. He won it five times and finished solo second five times, with a T-4 and a true outlier, a T-14 in 2005, sprinkled in there. He’s won there at the absolute height of his powers, in 2001. He’s won there during his transition to the Hank Haney swing, in 2004. He’s won there during the fruitful mid-2000s, in ’05 and ’06. And he’s won there when many thought he wouldn’t ever win again, beating Zach Johnson in a playoff in 2011. His scoring average at Sherwood over 48 rounds is 68.46, more than 3 1/2 shots better than the par of 72.

Perhaps this shouldn’t be particularly surprising, for two reasons. The first, Woods has always been the type of player that feasts on the courses he likes. He’s won eight times at Torrey Pines (seven Farmers Insurance Opens and a U.S. Open), eight times at Firestone, eight times at Bay Hill, five times at Muirfield Village and five times at Augusta National. One explanation for the repeat victories is that Woods simply doesn’t play many events and sticks to the ones he knows and likes. Clearly, Sherwood fits that bill.

The second reason is, simply put, it fits Woods’ game. The course isn’t particularly long—it’s about 7,200 yards from the championship tees—and Woods used to hit less than driver off the tees there often, which allows him to take advantage of his superior iron play. The greens are slopey and can be firm, rewarding precise iron shots and punishing sloppy ones. And it has five par 5s, which Woods absolutely feasted on in his prime—he led the tour in par-5 scoring average each of his first seven full years as a professional.

He’s comfortable around the golf course, and he’s comfortable in his native Southern California. As far as one-time host venues go for a title defense, Woods couldn’t ask for much more.