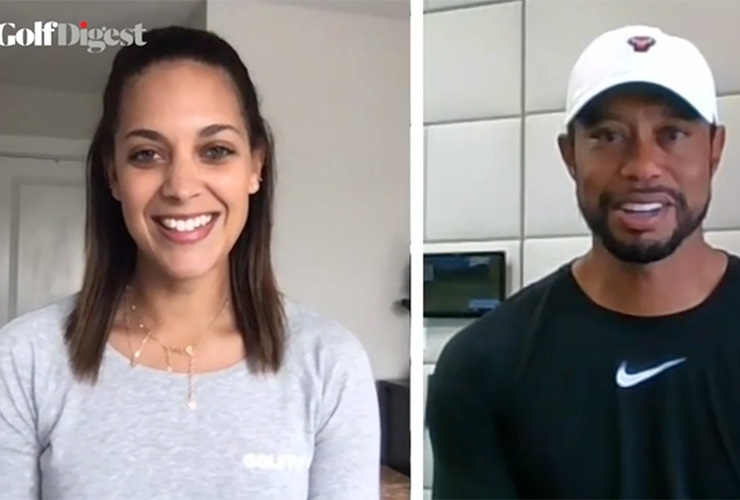 In an alternate reality, where the world hasn’t been turned upside down by a global pandemic, Tiger Woods is in Augusta, Ga. It’s the Wednesday before the Masters, and Woods’ preparations for his title defence are all but complete. All that’s left to do is get a good night’s sleep, shoot something under par on Thursday and chase a record-tying sixth “coat.” It’s just about game time.

Instead, like the rest of us, he’s holed up at home, doing his part to slow the spread of the coronavirus, and bitterly missing golf.

Our friend Henni Zuel from GOLFTV caught up with Woods Wednesday morning, who Zoomed in from his Jupiter Island, Fla. home for a wide-ranging conversation. Here are some of the highlights. For the full experience, check out the video above. Or, for the more audio inclined, listen to the podcast below.

He’s healthy and training.
In fantastic news for Tiger fans, Woods said he has been able to “train again and work out extensively.” His body has responded nicely and he’s feeling much better than he was last month, when he pulled out of the Players Championship with a stiff back. “Night and day,” he says. The only negative on the fitness front? “The number of icebaths I have to take per day.”

The Woods fam is into puzzles, but Tiger isn’t much help.
Tiger said his girlfriend Erica and his kids Sam and Charlie recently finished a 2,000-piece puzzle, so they gradutated to a 3,000-piece puzzle. Tiger also said he struggles a bit because he’s partially colourblind. From a guy who is fully colourblind, I feel your pain, TW.

He really did have an exact replica of the Masters Champions Dinner at home…with one key difference.

Same menu: steak and chicken fajitas, sushi and sashimi, and cupcakes and milkshakes for desert. Masters dinner, quarantine style. The main difference? There was something of a food fight at the end, which we don’t think would fly at Augusta National.

Listen to the full audio interview below: